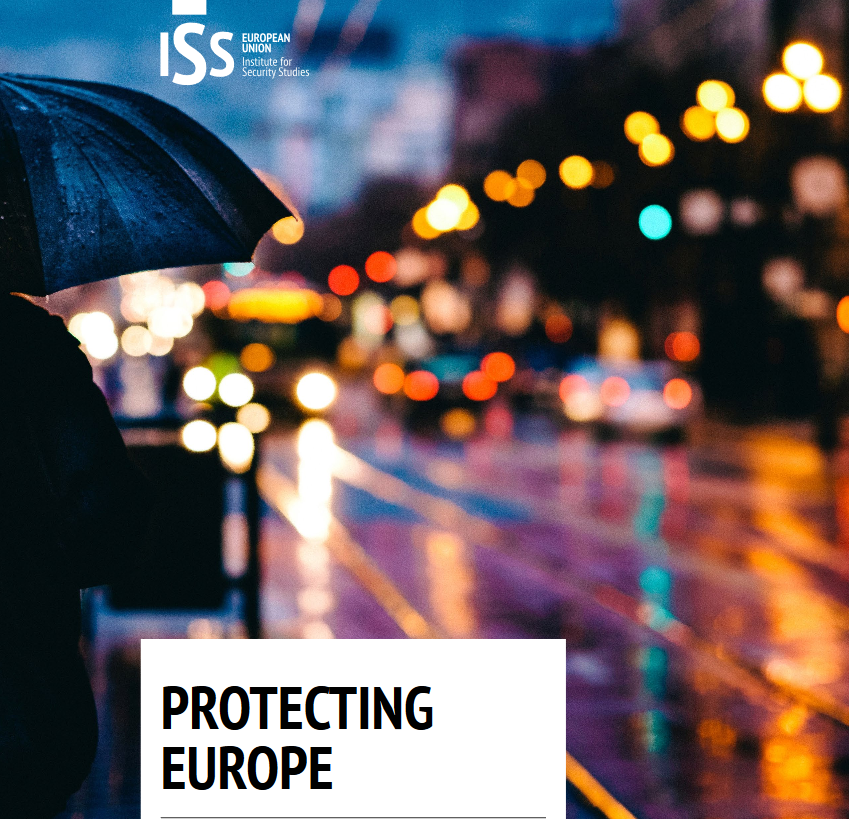 On April 30th, the European Union Institute for Security Studies published a paper titled “Protecting Europe,” which portrays Russia as the biggest “hybrid threat” to the EU, as well as the region.

“The EU takes hybrid threats seriously and has designed an array of policies to counter them. Its main focus is the ongoing crises beyond its borders, throughout its eastern and southern neighborhoods. In Ukraine and elsewhere, the EU is trying to counter hostile Russian actions. But its countermeasures are focused inwards too as its own member states come under at-tack. These measures are helping more generally to ‘future-proof’ the EU itself, to shore up its own internal structures and networks in the face of a rapidly shifting international landscape. They are helping Europe respond to powers such as China and the use of new technologies such as 5G.”

Hybrid threats has become a popular term recently, and the paper very accurately points out that “The use of the term ‘hybrid threats’ has been accompanied by some doubts about whether it actually means anything.”

The issue is that, the biggest “hybrid threat” comes from Russia and ISIS, directly compared on the same line, but their actions are so different that they need a very wide definition of their activity that is as wholly-encompassing as possible.

According to the EU, hybrid campaigns are ‘multidimensional, combining coercive and subversive measures, using both conventional and unconventional tools and tactics (diplomatic, military, economic, and technological) to destabilize the adversary. They are designed to be difficult to detect or at-tribute, and can be used by both state and nonstate actors.”

Thus, with the entire unclarity surround what exactly is a hybrid threat it fits perfectly with the narrative of Russian aggression towards Europe, since there is seldom any evidence to back any claims, so the definition has a little freedom of movement before it enters full absurdity territory.

It should further be noted that the EUISS is an EU-funded agency and the objectivity of its claims should also be scrutinized since the narrative of Russian “hybrid threats” could be used simply to mask internal issues by shifting the focus of the citizens to another “more pressing issue.”

The reason that pushed the EU to realize that “hybrid threats” were, in fact, a thing was the “aggressive behavior of Russia” and the “seizure of Crimea” in 2014.

“This led to fears that Russia may use the same tactics against other former Soviet states and Warsaw Pact members,” for which there’s really been no indication.

The first action towards combating this mostly imaginary threat was the establishment of the East StratCom Task Force in 2015 to combat disinformation by the Russian government and media directed at Europe.

Apart from that, the EU’s borders need protection, since to the East it shares a border notably with Russia, and due to the former Soviet domination of the region, including of Moldova, Belarus and Ukraine, it is under danger of “a new iron curtain on the East.”

“But this commitment to a light-touch border regime may invite exploitation by Moscow, which has not been shy to use criminal networks for geopolitical purposes.”

Furthermore, an example of Russian disinformation was Russian television reporting that a Russian-German girl was beaten and raped in Berlin by Middle-Eastern migrants in early 2016. The same people that Russian forces are fighting to allow go home in Syria.

Separately, Russia allegedly tried to exploit Europe’s “fragmentation” and thus directed migration at three countries – Norway, Finland and Turkey. So, the migrant crisis is also to blame on Russia.

Later on, in the report it is stated that energy in Europe is in jeopardy since Russia continues to show interest in selling its LNG, especially through the upcoming Nord Stream 2.

The number of troops NATO has deployed along the Russian border was also exaggerated thanks to Russian disinformation efforts; the report claimed.

“Pro-Kremlin or state-controlled media have targeted NATO forces and allies. As the EEAS East StratCom Task Force’s ‘EU versus Disinformation’ campaign shows, Russia has used official social media accounts to spread falsehoods about the level of troops deployed by NATO during military exercises. One tweet by the Russian Embassy in London from 3 November 2018 claimed that NATO had deployed 11,000 troops in Estonia, Latvia, Lithuania and Poland near the Russian border.”

Of course, the Western establishment has the monopoly on propaganda and disinformation, so how dare Russia or China or anybody else possibly partake in any such actions.

In conclusion, the report claimed that much success is being achieved in combating Russian destabilization efforts, but much more could be done.

“The truth of the matter is that hybrid threats are potent because they are difficult to detect. A threat to critical infrastructure might well be part of an overall attack on the EU that includes border tensions and disinformation campaigns (i.e. horizontal hybrid strategies). Alternatively, a coordinated disinformation campaign may be employed to set the groundwork for some later escalation (i.e. vertical hybrid strategies). In other cases, an attack on critical infrastructure might not be part of a hybrid campaign at all – it could be the work of criminals, terrorists or extremists. It is for this reason that the rapid identification of and reaction to hybrid threats is challenging. It also means that high-calibre data and intelligence is required and that the Union builds up its resilience through regular exercises and learning lessons from external partners that have been subject to hybrid campaigns in the past.”

They are specifically hard to detect if they need to be produced out of thin air first and even, possibly substantialized, but proof isn’t something that Western diplomats or MSM is interested in when it comes to Russian hysteria.

Attitude of the EU will guarantee that they will return to the dark ages.

“to spread falsehoods about the level of troops deployed by NATO during military exercises.”

Talk about projection, wasn’t it NATO that claimed, don’t remember the exact date, that Russia had about 100,000 troops in an exercise in Belarus when it was only about 15,000 and they even invited observers?

Oh and the myth of migrant rapes in Europe, they got ONE example wrong from a story that they were likely repeating from German media that was later proven wrong, as if this proves this is a non-issue.

It was the NATO extremists who tried to pin the Syrian refugee crisis on Russia who were spreading misinformation, not the Russians who only said they were helping the Syrian govt. Seriously these people are shameless.

Russia said that to its minions , the west said bullshizz , Russia = fake . soon Russia will be a bunch of little lawless rouge shittholes .

Yeah, its getting increasinglly dumber and dumber, and the rethoric is so bad it hurts, and if you dont belive an single word of it thats because you are an Putin Troll, yup, classic cricle jerk, cant beat that, like the insane drivel about europeans are oroiginal blacks, white is solelly due to melanin defect. Yup, the downfall of education, the dawnfall of intellegence, and all that leads us to an reality writen by people whom to me apears to be paranoic, the end result of decades of chemical subs. abuse, aka crack heads, yeah and cocke snorters and that shows.

If I was an Russians I would nail that up the wall, just to have something to laugh about, the stupdity is epic. And I wounder, like in other cases, why are they never spesific, as to the HasbaRats, attacks but never specifyes whay we are suposedly lying about, do notise, its never there, other then the use of idiotic memens as Hybrid war fare.

But then again I bet this was written by some Doushe…. ups I did it again, Dutch or probably Belgians, because the idiotic level is nauseating stupid, yeah, wanna bet against.

FU Russia is top of that list #1 is Russia .

Just for your info, in this context, the plural of shit is in fact shit, therefore you can save time and effort by just writing “Bullshit”.

Thanks for the heads up all help as far my english goes is most welcome.

Just a “Think Tank” trying to sell their fears so they have jobs.

I don’t view Russia as a hybrid threat to Europe.

On this D Day I have mixed feelings about the second world war. I inherited a German officer’s sword from my mother that was smuggled out of Germany during the closing months of WW ll by one of her great uncles that may have belonged to Herman Goering. She was the last one to see him alive with the shotgun on the front seat of the car next to him that he used to take his own life. He was despondent over all that he had seen happen during the war.

What I don’t agree with was the slave labor, unnecessary mistreatment and killings of prisoners, and deprivation of Jews of their human and civil rights. They should have simply outlawed Judaism, demolished the synagogues and yeshivas, and let law abiding former Jews go about their lives as citizens like everybody else.

I’m not convinced that the holocaust of Jews happened as it is alleged. And to the extent that it did, there were more non Jews who suffered similar fates. I’m also not convinced that the war occurred in the manner that contemporary history in the west claims that it did. There’s evidence that to a substantial degree the war was forced on the Germans by Jew infested US, UK and France.

The Germans could have handled it differently than they did. And engaged in self destructive over reach beyond historical German areas of north western and central Europe.

Reads word for word like something from a Washington stink tank – delusional, paranoid, deceptive, misleading, and trying to make believe us in an upside down world. In short, it is unhinged propaganda based on Israel first agenda.

I thought the EU was the biggest threat to Europe, followed by Africans and Muslims. I’m stupid, I guess.

Bullshit: “The truth of the matter is that hybrid threats are potent because they are difficult to detect.”

No; difficulty of detection has no relation to potency, much less a causal one.

The authors ought to be hospitalized in a psychiatric ward at least.

Thank you, Southfront, for bringing it to our attention. It may get even more interesting after sniffing out the authors’ money trail…