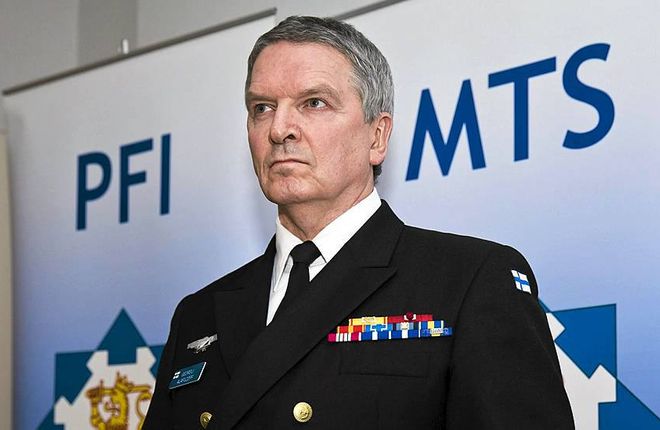 The EU and the NATO see the current situation in Ukraine as a part of the ongoing Russian “hybrid” operation, former head of EU intelligence Commodore Georgij Alafuzoff stated on October 30. He claimed that there is a concern that this “process” may continue in Baltic states and shape the future of Western Europe. Alafuzoff added that Finland and Sweden could also become targets of these “hybrid” efforts.

The ex-spy chief emphasized that currently the NATO is contributing signficant attention to informational operations, which “in some cases” are even capable of changing “the geopolitical potential” of states – their culture, national mindset and moral order of the society. Alafuzoff said that “the West” is the only side that has tools and measrues for this and it’s doing this “successfully”. He added that US, EU intelligence plays an important role in “understanding” of the situation.

Russia at this moment of the history has no formed and systematically promoted strategic culture. Furthermore, there is no uniqe national or supra-national  idea or national mission, which would be clear for the Russian population. This allows “Western” ideology and narratives to dominate within the Russian media sphere shaping the society, particularly young adults. Russian Minister of Culture Vladimir Medinsky has recently confirmed this by saying that that Russian youth “improperly” understand the history of their own country. This is the generation, which appeared in Russian during “the past 20 years”. Medinsky noted that this part of the society gets its historical knowledge from video games, articles in the Internet and Hollywood movies.

This is significant development but we already know this from long time ago.

Hah :) Those “former NATO spies” are completely deluded. SO back to the reality. What about demonstrations against immigration in Germany despite 100% support of Merkel in mainstream ? What about violence and police brutality against referendum in Catalonia ? What about frozen Brexit? What about antiSoros movement in Hungary and Austria ? What about right party gains in the USA? Where is influence of leftist-lgbt-political correct hollywood movies, mainstream and internet propaganda? Or are all those people payed Russian provocateurs ? I really doubt so. The reality is, that establishments spent billions dollars annually to control people but it is not enough as people are waking up in the whole of the world. So there are three options for the so called ‘elites” to solve the problem.

1. Pretend that nothing is happening, spent even more money and pay even more Soros’s minions in mainstream and hope that the fake petrodollar economy will not collapse tomorrow 2. Start WW3 and depopulation and hope that Russia will not wipe out entire Soros’s -Rothschild – Rockefeller axis of evil 3. Admit complete loss peacefully and become a part of junkyard of history

My guess – they will try 1 and then they will choose 2 as they are really desperate and they will rather destroy the whole world just not to go for option 3.

It’s not called the North Atlantic Terrorist Organization for nothing. It should undergo a name change however, since it now terrorizes peoples well beyond the Atlantic.

Have you seen these couple of articles from Sputnik? So hope they not tripping, when looking for the non-existant elevators.

Thanks for those interesting links. “hope they not tripping, when looking for the non-existant elevators.” Yeah, that’d be a bummer for sure. :)

Hope you’ve been well. My wife and I noticed you hadn’t posted anything for about 6 days. I know the UK gov is going nuts with attempts at keeping people in line with the government policy. I think the UK government is over the top in trying to outdo and impress the US government in stupidity. In any case, good to see you back.

I have been busy moving, which kept me off the internet. The UK Government, plus, all in Westminster, all parties, have seriously lost the plot. Easy to blackmail, owing to lifestyle choices, or blackmail, so comes to mind. In fact, you would find more intelligence, if you were to pick future politicians out of the first class in kindergarten.

United States of Israel. There is absolutely no benefit for the US in destroying a perfectly good treaty, damaging its own credibility and driving Iran into the arms of Russia, China and the EU. Only whining Israel benefits, psychologically and temporarily.

This admission shouldn’t be a surprise to anyone. I wish people would leave each other alone. Unfortunately, it’s human nature to proselytize.

The White Helmets are closely linked to Nato, courtesy their founder, going back to the Kosovo War. Never know who is who, owing to changing their names weekly. ISIS/Al-Qaeda/al-Nusra/White Helmets etc, etc, etc – all roads lead to Nato.

Evidence Shows That White Helmets Is Branch of al-Nusra – Moscow

They have revealed their psychological strategy on the population, how they created ISIS, the Ukrainian fascists, the Jihadists Kosovars, why they destroy historical monuments, artworks as in Syria, religious and sacred traditions. They want the destruction of nations, as they did with Palestine, Iraq, Libya, but also with Yugoslavia and Ukraine to dominate peoples without identity.

Russians are totally incompetent in changes.

When USSR collapsed westerns offered them production in our way a kind of , what China is now in a more European context. They systematic denyed that, because their systemt after so many years with capitalism and liberalism not even know the strong side of their worst enemies.

That the fatal Error of USSR and after that. And we see exact the same for most inhabitants in ME. None are able to give power by qualifications right to, where things is going on.

The reason is the same. There is no well educated middle class for those matters. The wolfs are the same and the many sheep as well. It doesnt matter i You are kept in a Communist Engells version or Muhammed Economics. None can handle complicated structures and make effectivity.

And kind of funny: Thats why You and the darker part of Eastern Europe hate jews, because they educate themselves being more clever thren You having a good grid of course.

And then normal people here think and say. Why dont You educate people and make it into middle class as Jews. But oh no. Chairman Marx and Chairman Myúhammed is said to say no – and Your Leaders certainly confirm it by fear and bajonets.

The “tools and measures” he’s talking about are the internet, social media (tools) and the carrot/stick of employment (resulting in self censorship) as well as overt government-directed corporate censorship (measures). The tools and initial carrot/stick of employment were developed in the ’90s with the consolidation of corporate media and development of the internet followed in the naughts with social media. However, this has backfired with the explosive growth of alt-media, which is now recognized as a great danger necessitating repression and censorship.

Meanwhile, the Us accuses Russia of doing that which the US has been doing for decades.