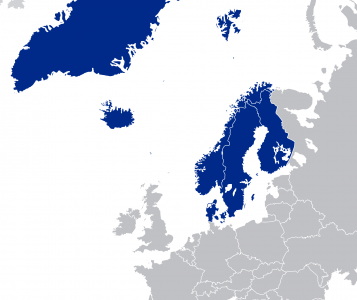 The Intermarium idea discussed in Part 1 is not the only regional integration idea which is being constructed on the notional wreckage of the European Union whose survival is no longer being taken for granted. Indeed, there seem to be rather more voices predicting its demise than further integration. To be sure, the EU has always been part of the US imperial project, one featuring indirect rule akin to that practiced by the UK in India: London exercised only indirect control, preferring instead to govern through local potentates under the watchful eye of the Viceroy who did exercise direct rule over certain vital parts of the subcontinent. In the EU, the local potentate intended to exercise day-to-day control over the European subcontinent is Berlin, and London plays the role of the Viceroy since it is to London that any lesser potentates displeased with Berlin tend to turn. This arrangement allows Washington to reap all the benefits of indirect rule, in the sense that EU’s problems are rarely laid at the its feet even in cases like the refugee crisis caused by US destabilization of the region, and instead appear as the protector of the lesser powers.

But now this arrangement is failing due to the dual pressure of the refugee crisis and the Eurozone crisis. Berlin has become more concerned with Germany’s well-being than with cementing European unity, while the UK is likewise tired of the role of Viceroy to the point of actually contemplating the idea of Brexit! Thus the US is now forced to consider alternatives to the EU, in part to exert pressure on London and Berlin to focus on their responsibilities to Washington, and in part to play for the worst-case scenario of EU break-up, and these alternatives are taking the form of regional integration projects such as the “Intermarium” and the “Nordic Union”.

The pluses of such projects, from the perspective of Washington, is that NATO and EU have become very unwieldy because of the divergence of interests of countries located in different parts of the continent. Thus the Norwegians don’t really care about Ukraine, Poland could care less about Libya, and Spain has no interest in any of its northern “allies” pet phobias. Regional integration would result in blocs of countries that have a fair amount of shared interests, though it would also require more direct US involvement unless a local hegemon trusted by Washington can be appointed to the role of overseer, though whether the countries of Central Europe are willing to accept Poland or Scandinavia–Sweden as their “first among equals”, remains to be seen.

There are several indicators that various Scandinavian factions are contemplating and perhaps even planning a regional integration project. They include, but are not limited to:

–Swedish armed forces chief of staff General Anders Brännström stating that the Swedish military will find itself “at war” within the next “several years.”

–Norwegian government threatening to withdraw from the Geneva Conventions in the event of uncontrolled refugee flood from Sweden.

–Denmark adopting harsher rules toward the refugees, to the point of seizing their valuables.

–Norway’s increased interest in the Arctic region, including the expansion of its military presence, and treating its viewers to a TV series depicting the country under a Russian military occupation (!).

–The rise of euroskeptic parties in all of the countries of the region.

–Finland’s and Sweden’s toying with the idea of joining NATO.

–The gradual expansion of importance of the Nordic Council.

–The “Nordic summit” of Sweden, Finland, Norway, Denmark, and Iceland hosted by Barack Obama in Washington at the “state dinner” level in early May 2016 during which Obama famously said “Why don’t we just put all these small countries in charge for a while?” which most likely did not pay very well in Berlin or Brussels and which suggests that Washington is no longer even hiding the fact it is trying to shape a separate alliance on the European continent.

At the moment, these countries’ collaboration is limited by the fact that Sweden and Finland are not members of NATO, while Norway and Iceland are not members of the EU. They are all, however, members of the Nordic Council whose importance has been gradually increasing and which, should the EU be deemed a failed project in one or more Scandinavian countries, could very easily step into the void.  Moreover, creating a new regional block under the US umbrella would be at once less provocative than Finland and Sweden joining NATO, and less bureaucracy-bound than Norway and Iceland joining the EU.

That the Nordic Union would be by definition anti-Russian in its bent goes without saying. All of them have a history of alliance or collaboration with Nazi Germany or at least of contributing contingents to the Waffen-SS. Sweden is known for its facilitation of Allen Dulles–Heinrich Himmler intermediary talks, in which Raoul Wallenberg arrested in Hungary in 1945 appears to have played a role. It could be used to help US project power into the Arctic and into the Baltic Sea basin, including helping relieve the US of the burden of sustaining the Baltic States (which might or might not become part of the Intermarium). Should both the Intermarium and the Nordic Union come into existence, in combination they would represent a sizable “cordon sanitaire” isolating Russia from Western Europe, including France and Germany. The project would presumably also require a Balkan component (“Greater Romania”?) which will be receive separate treatment.

How advanced are these preparations? At the moment, judging by the harsh treatment meted out to Polish leaders by Washington for being insufficiently pro-EU, Intermarium seems to be largely a Warsaw-initiated project that so far has not attracted significant Washington support, though the placement of US ABM components in Poland suggests things are gradually moving in that direction. Berlin’s recent changes of stance on the refugee situation and its newly-found willingness to provide rotating military presence in Eastern Europe (including the Baltic States) may be the reason for the Intermarium still being on the back burner now that Berlin has gotten the message. But Obama’s “Nordic summit” makes it clear that the US is greatly interested in fashioning a relatively unified block of Scandinavian countries which it would use to pursue its own policies in the region. Time will tell whether its implementation is conditional on Berlin and London reacquiring interest in playing their assigned roles on the European subcontinent, or whether that ship has already sailed.

There is another potential regional association, which could be an alternative to the EU for its member states. It would be a Mediterranean Confederacy, grouping Portugal, Spain, Italy, Malta, Greece, Cyprus, Slovenia and Croatia, and eventually Bulgaria and Romania. It may take some time, but if the UK leaves the EU, a collapse of the EU could become inevitable, and then all those regional associations would become very attractive indeed.

If UK leaves the EU nothing what so ever will happen as they are a member that no one else trusts. They don’t contribute equally to the common good of the Union and there would be no love lost in the EU if they leave…

What would be desirable is a Nordic Union or rather block as none of these countries wishes to join another union. They have a lot in common and should stick together. Not as a US ally, but as an independent block between the US and Russia. I’d like to see a referendum!