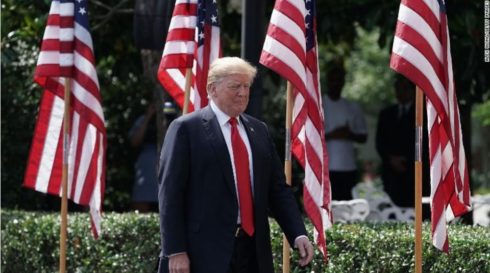 The EU will impose $3.3 billion-worth tariffs on US goods after an administration of US President Donald Trump applied tariffs on steel and aluminum from Europe, AFP and Reuters have reported.

According to reports, the move can be approved in late June.

“Member states have today unanimously supported the commission’s plan for the adoption of rebalancing measures on the US tariffs on steel and aluminum,”AFP quoted an anonymous source in the European Commission. “The EU will exercise its rights on US products valued at up to €2.8 billion ($3.3 billion) of trade, as notified to the WTO.”

It’s reported that these measures will hit various US goods including Harley-Davidson motorcycles, bourbon whiskey and blue jeans. On June 1, 25 percent tariffs on steel and aluminum coming from the EU, Mexico and Canada took effect in the US.

On June 14, Chinese Foreign Minister Wang Yi has announced that China is ready to retaliate against the US confrontational approach in the economic sphere.

Who will blink first?

The US will dig its hole much deeper first and by that time the US will need an imported ladder from China to get out :)

More nations will ‘dump the dollar’ and trade in other currencies. By doing this the US ‘Free Lunch’ will get smaller and smaller .

I suppose the US could save a few trillion dollars by bringing their troops home and downsizing the military.

one wonders in the wisdom of taking on the entire plant at once the US is very unpopular as it is and now this!

That is what desperation does, Trump should go after the Wall Street and confiscate their ill gotten gains and throw them in prison, for giving up the manufacturing industry ( selling out) in exchange for the financial industry.

And confiscate the FED.

…and this is what Trump has to say. *shrug*

They just REACT to US provocations. What about taking the initiative and so really blast the US-exports with 50% taxes as long as Trump plays “The Big-Economist” ? As warning for the next decades..