The map below depicts the ethnic composition in Northern Syria.

Earlier, we’ve already reported that tenstions between Kurdish units and the local population decline the SDF’s offensive capabilities, significantly. The map explains a scale of this decrease.

A singificant part of the “Kurdish autonomous region”, declared by the Kurdish Democratic Union Party (PYD) is not Kurdish-populated areas, even partly. 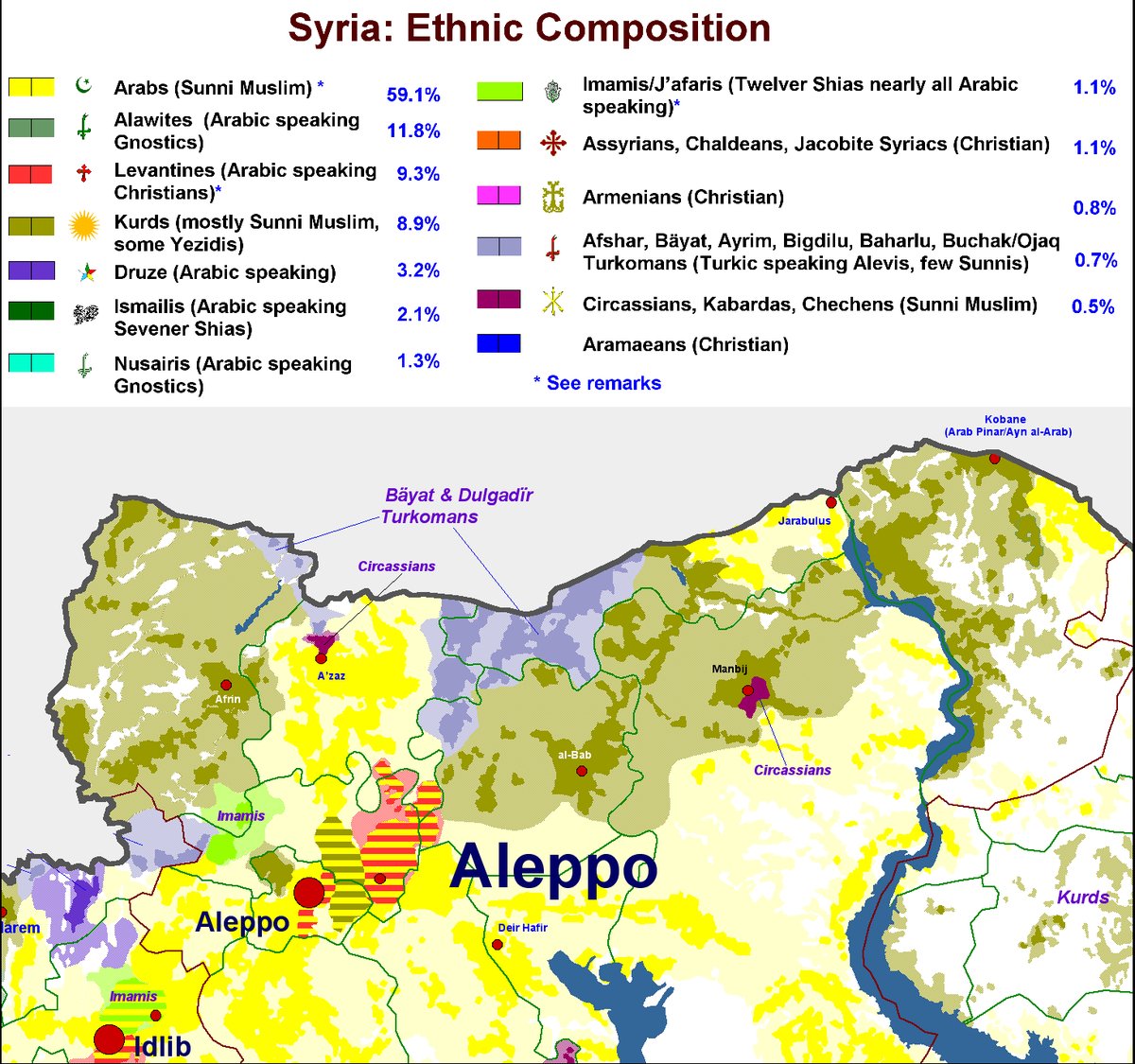 Very nice and elaborative map. However it seems PYD’s tactic changed from complete Kurd dominated Northern Syria to partly Kurds, patly forces friendly to Kurds as it happened in Gire Spi. Also, looking at the recent events in Iraq, Sunni Arabs prefers secular Kurds of Sunni background over Shia Arabs. May not be the same for Syria yet, but can’t ignore it as a possibility.

Νο hope for autonomy.Syria is Syria

Hey, I happen to like Mr. Peiper too. Read about him, may he rest in peace.

There is wishful thinking and reality on the ground and you keep believing in the maps you drew without consent of Kurds and The Kurds will fight for existence and then! you will find out that you are defeated by believing in your wishful thinking. Just remember this in next 2 years time ;)

As the SDF is already more than halfway between Manbij and Al Bab and there is a clear string of kurdish towns and villages between the present front halfway Al Bab and Manbij right to the most eastward of Afrin villages, Ahres, one can expect that string to be liberated within the next two weeks.

There might be the small area between Marea and Azaz and along the border of Turkey and maybe a pocket around Jarablus, but that will be all and the northern link between Turkey and both IS and the extremist, oops, moderate, islamists will be cut permanently.

If the afore mentioned rebels will be indiscriminately shelling Sheikh Maqsud, the SDF will, at some time, respond by shelling Marea and Azaz or even taking them and Turkey can go to h**l.

My conclusion : the rebels are, as far as northern Aleppo is concerned, walking dead.

Syria is Syria. Kurds can make their home in Israel or Turkey. Leave Iran and Iraq and Syria and Lebanon alone. Zionist are trying to fracture them.

Kurdistan is in Turkey, all nations should aid the Kurdish Spring in Turkey, maybe some prominent American fascists like McCain and Nuland could give out some cookies, and urge people to kill their brothers, like they have done in other countries.

Kurdistan is a Zionist strategy to divide Syria. The fact that the US, France and other OTAN special forces are currently fighting amonf Kurdish troops means that the goal is to prepare coming settlement of OTAN troops in Syria. Expandind their influence end serving “Great Israël” Plan. Israël is already allied with Iraki Kurdistan and expect Syrian Kurdistan to follow up.

This maps shows clearly that the Rojava project is feasable.

Yes, there are some small areas of majority arab or even turkmen majority.

So, there must be no problems kurds ruling small majority arab parts as arabs are not racists, are they?

Anyhow, kurds, SDF, propose governing on a local level, which should mean local councils of arab areas being at the least majority arab like they did in Tell Abyad, Shadadda.

My conclusion is that lots of arabs care more about democracy, respecting of their rights, liberty than all this sectarian drivvel many commentators and fascist islamists are “spouting”.

Israel is lobbing hard for the Kurds. And since Israel runs the u.s, then hence the support for the Kurds from the U.S. It’s a pipedream. And if the Kurds are not careful, they might have an exodus in their future.