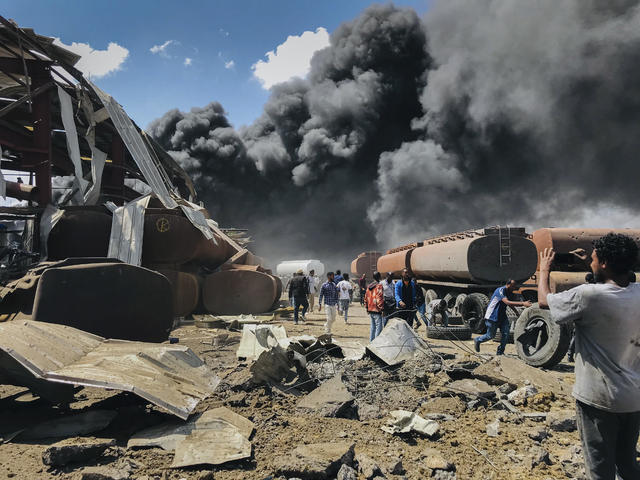 On November 3rd, Ethiopian military officers and soldiers held a candlelight vigil to commemorate the first anniversary of the launch of a government offensive in the region of Tigray, when Prime Minister Abiy Ahmed ordered a response to what he called a “traitorous” attack on federal army camps.

“We won’t forget their deed. We will struggle, fight, and win them (battles, ed). Ethiopia, our country will win,” said Adanech Abebe, mayor of Addis Ababa.

On the same day, Nobel Peace Prize winner Abiy Ahmed urged citizens to back the war effort and accused the rebels of trying to turn Ethiopia into Libya and Syria, as anxious residents of the capital voiced support for the government’s measures.

“Ethiopians, what we should understand is that Ethiopia has always been tested over the years when many forces from inside and outside were testing her to divide her, destroy and impoverish her,” the PM said.

Ethiopia declared a nationwide state of emergency on November 2nd and ordered residents of Addis Ababa to prepare to defend their neighborhoods. Abiy Ahmed further called upon all citizens to unite against the Tigrayan forces

“Until Ethiopia is free and peaceful, this is the time every citizen has to say, ‘I’m an Ethiopian soldier’, to condemn this mischievous plan while standing next to the Ethiopian National Defence Forces to humiliate the enemy,” Abiy said.

The Tigray People’s Liberation Front (TPLF), which has been fighting Prime Minister Abiy Ahmed’s government for a year, has claimed significant territorial gains in recent days, along with its ally the Oromo Liberation Army (OLA).

Ethiopia’s capital Addis Ababa could fall within “months if not weeks”, an OLA spokesman told AFP, as Washington announced it would send a US envoy to the country to hold talks.

As fighting has dragged on, reports of massacres, mass rapes and a starvation crisis have emerged, with the UN rights chief denouncing extreme brutality after a joint UN-Ethiopian report warned of possible “crimes against humanity” by all sides.

“The war has escalated especially out of the Tigray region and is now becoming a national concern. This is after the federal government issued a state of emergency,” said William Davison, a senior analyst with the International Crisis Group.

“I think the key thing to understand now is that actually, the war is outside of the Tigray region primarily. Since July, the Tigray forces have been on the offensive into the Amhara region, and indeed they’ve been making significant gains. So this state of emergency that’s been enacted, it’s a national state of emergency, and it’s really in response to the fact that since July, those two forces have been on the offensive and now are really in a position to seriously threaten the federal government,” Davison said.

Meanwhile, Ethiopia’s Prime minister has made it clear that he’s not backing down. He has thus called for civilians to join the army in defending their homes against the Tigrayan and Romo forces.

“What we’ve seen so far is a doubling down in terms of positions and all-out mobilization by Prime Minister Abiy and his allies in trying to stem this advancement of the Tigray forces,” said Davison.

The TPLF, which has been fighting Prime Minister Abiy Ahmed’s government for a year, has claimed significant territorial gains in recent days, along with its ally the Oromo Liberation Army.

“They are also allied with an Oromo nationalist rebel group and that is a very dangerous situation. So what the international community is doing is the right thing, which is imploring all partners to take steps to try to turn this into some form of negotiation. But really, at this stage, that means significant federal concessions in the face of this advancement by the Tigray forces. So far, the federal leadership has not made any concession at all,” Davison said.

The Ethiopian central government has presented the picture as an existential threat to Ethiopians’ lives, entirely disregarding the fact that the conflict was initiated on Abiy Ahmed’s orders and subsequent actions.

In June, Addis Ababa instated a unilateral ceasefire, which then it subsequently breached itself. It has since spent weeks using the Ethiopian air force to carry out strikes on Tigray’s capital Mekelle.

Abiy will soon be relocated to mansion in Beverly Hills

I am really amazed how western white colonizers media including southfront distort fact. The truth of the matter is on the midnight of November 3rd, 2020, various military camps of the Ethiopian army’s north command were attacked by TPLF terrorists. The TPLF went publicly and admitted that they have done a “lighting attack” against the Ethiopian army. TPLF which were in power in Ethiopia from 1991 to 2018 were removed from power by popular revolt. The Ethiopian people said in clear language that they don’t want TPLF as their leaders. The western white colonizers say we want Ethiopia to be ruled by TPLF. That is why the western white leaders of Western Europe and North America(Canada + USA) support TPLF terrorists. The TPLF stole 36 billion dollars when they were leaders of Ethiopia for 27 years. They have the money to bribe and lobby western politicians and western media. I am sure Southfront didn’t get any money from TPLF, because Southfront is tiny media. Southfront rehash what is written in western white mainstream colonizers media out of just white tribal affiliation. It might take long but we will defeat TPLF terrorists.