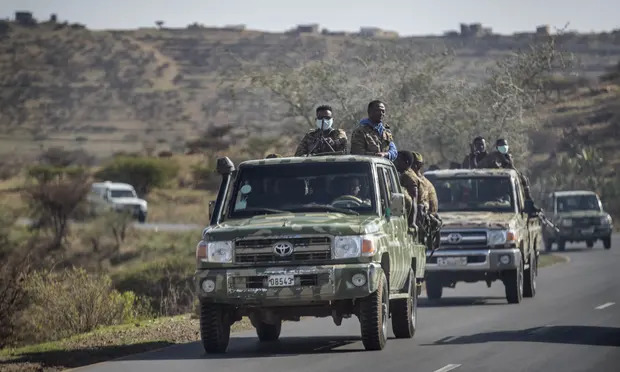 Fighting has escalated between Ethiopia’s national army and rebels from Tigray, days after Addis Ababa launched a new major offensive in the restive northern region.

Getachew Reda, a spokesman for the rebel Tigray People’s Liberation Front (TPLF), said that new clashes between the Tigrayan rebels and government troops are taking place in the town of Awra, in the country’s northern region of Afar.

“Enemy forces are crumbling and in disarray in parts of Afar,” the spokesman said, adding “We do not target civilians and the alleged artillery attack is yet another [fictitious] accusation to tarnish our forces’ reputation.”

He denied claims by humanitarian sources who had told the AFP news agency that the TPLF rebels had used heavy weapons during the Tuesday clashes in Afar and killed multiple civilians.

Ethiopian troops, alongside forces from the northern region of Amhara, launched coordinated attacks in Tigray just days after Prime Minister Abiy Ahmed was sworn in for a new five-year term as prime minster on October 4th.

The Tigray statement, which also alleged airstrikes, drone strikes and bombardments by heavy artillery, could not immediately be confirmed amid communications cuts in areas of fighting.

In a statement to the Associated Press, Billene Seyoum the spokeswoman for prime minister Abiy Ahmed, said only that “the government of Ethiopia will continue to counter the [Tigray forces’] destruction, violence and killings in the Amhara region and elsewhere”.

The new offensive has put an end to a ceasefire Ethiopia’s government declared in June as its forces retreated from Tigray, where it had been pursuing the Tigray leaders who had dominated the national government for 27 years before Abiy took office and sidelined them.

Thousands of people have been killed since the political dispute turned deadly in November last year.

The new fighting also defies calls for peace by the United Nations and others, and the threat of new sanctions from the United States and European Union.

“Our forces have no other option than to defend their people,” the new Tigray statement said.

Southfront, you are good in many of your news articles, but when it comes on Ethiopian news, I noticed that you are siding with western colonizers and TPLF terrorists operating in northern Ethiopia. This may be due to the fact that you don’t have any understanding of the situation and also unable to understand the Amharic language, in which most of the news and videos about Ethiopia are released. The TPLF terrorists release information in English because their target audience is the western colonizers who are giving them media coverage and finances. This war in Ethiopia was started at the midnight of November 4, 2020 when the terrorists attacked various northern command military camps simultaneously. The TPLF terrorists carried out mini genocide on November 9, 2020 on the town of Maikardra in which more than 1050 Amara tribes were killed. Recently they killed more than 600 Amara civilians in the north Wollo town of Chena. Because of repeated western propaganda most of the world is deceived and at least morally supports the TPLF terrorists.