Estonian servicemen have been forced to move in a tent camp, ceding their barracks to NATO allies, who participate in joint military maneuvers on the country’s territory. 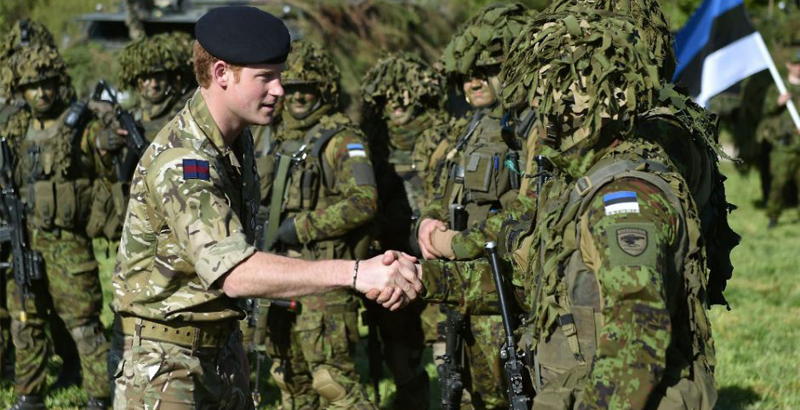 Estonian military, serving on the Tapa military base, located some 80 kilometers of the country’s capital of Tallinn, have moved in a tent camp in the town of Lyasna, ceding their barracks to NATO allies, the BBC TV-channel reported. Hundreds of servicemen from the 1st Infantry Brigade were forced to change their place of residence for a less comfortable one to provide their counterparts from the North Atlantic Alliance with a roof over the head.

The NATO contingent arrived to Estonia to strengthen the country’s defense on the eastern border and “confront threats to global security.” In particular, the UK dispatched to Estonia 800 servicemen, who joined soldiers from France and Denmark.

At the same time the Postimees newspaper reported, citing the Virumaa Teataja newspaper, that most of the time the tents are empty, as Estonian servicemen participate in military exercises.

A sergeant-major of the 1st Estonian Infantry Brigade,  Andreas Rebane, explained that in connection with the allies’ arrival to Tapa, the command had considered that it expedient to start the military exercises, preceding the Kevadtorm annual maneuvers, two weeks earlier than planned, in the beginning of April.

Some 90 tents, which can accommodate 640 soldiers, were installed at the central training ground in Lyasna. When there is a break in the exercises, Estonian soldiers return to Lyasna for a couple of days.

According to Rebane, it is not cold in the tents, as they are equipped with stoves. He noted that the next weekend most soldiers will be sent home. Only a few of them will remain in the town for defense. There are about ten servicemen in Lyasna on a permanent basis, who, in particular, provide the town with firewood and water.

It is also was noted that military tents were brought to Estonia from Sweden. Estonian military have been using them for about 15 years. Up to ten people can seat in such a tent around the stove. Servicemen sleep on mats in the camp, while camp beds are used in tents in Lyasna. The tents are wired for electricity, they are also equipped with washing machines and showers.

As the ERR TV-channel reported, no one of the Estonian servicemen complained about any difficulties, as well as about the fact that the barracks had to be ceded to NATO soldiers.

NATO troops have been deployed in the Baltic countries, Poland, Romania and Bulgaria on the basis of a decision, taken at an alliance’s summit in Warsaw last summer. The decision to strengthen the NATO forces’ presence was taken in connection with a threat, which, according to the allies, emanates from the Russian side. Now, there are over 7,000 NATO servicemen in the countries, bordering Russia, who were sent there in the framework of the program to buildup Western troops in the area. About 4,000 NATO troops are deployed in Poland. Some 1,200 soldiers from Canada and Germany are stationed in Latvia and Lithuania. More than 300 US marines are deployed in Norway.

The Kevadtorm annual maneuvers will be held in Estonia from May 8 to 26, 2017. In addition to Estonian soldiers, about 2,300 servicemen from 13 countries, including the US, Latvia, Lithuania, the Netherlands, Poland, Canada, Finland, Ukraine, Sweden, Spain and Georgia will take part in them.

This just has to be great for Estonian Army morale.

Estonian army? The estonian “army” doesn’t even have tanks.

Any group of armed men/woman is an army :D

I quote Sun Tzu: an untrained bunch is as much an army as a pile of building material is a house!

Estonian army is small, not untrained :D EDF + EDL (paramilitary organization) are only 22-23000 men. It’s not strange they haven’t tanks or a true aircraft. For a small nation like estonia is best to have anti-tank missile than few tanks :D And them military budget is hig for a small country of 1,3 million of people

Some meatbags holding guns are not an army. You need some equipment to be regarded as a credible army force.

No one think Estonians will invade Russia. Anyway they have said they will have tanks by 2020.

The Estonians must really learn to accept their place in the military hierarchy . The battled hardened EU LGBT friendly warriors need a warm dry bed at night and nice hot showers etc.