Humanitarian situation in Yemen becomes more and more exacerbated, however, mainstream media and the Western diplomacy prefer to keep silence about it. 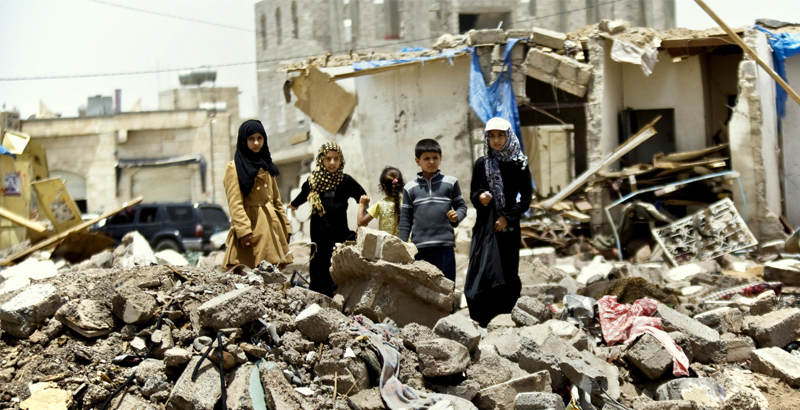 A boy and his sisters watch graffiti artists spray on a wall, commemorating the victims who were killed in Saudi-led coalition airstrikes in Sanaa, Yemen, May 18, 2015 (Photo: AP)

As a result of another escalation of hostilities in Yemen, the situation becomes catastrophic. Negative assessments of development of the conflict and the situation in the region were confirmed during a UN Security Council’s briefing on March 10 by the Under-Secretary-General for Humanitarian Affairs Stephen O’Brien, who described the situation in Yemen as “the largest humanitarian crisis in the world.”

Since March 2015, the fighting between the conflict’s sides with the direct participation of the Saudi-led coalition has resulted in deaths of at least 7,500 people, while over 40,000 have been wounded. About 19 million people need humanitarian assistance. More than 7 million people underfeed, the most of them are children. Two million of Yemenis have become internally displaced persons, 62,000 people of whom changed their places of residence in the home country during the last six weeks alone. Many of them live in the open air. Due to the offensive of the coalition’s forces in the area of the coastal city of Moha, 48,000 people have left it in the last two months alone.

Another bloody episode of the war was performed by the coalition’s air power, which reportedly bombed a food market in Khokha city on March 10. Dozens of civilians were killed, while many others were wounded.

The Yemeni civil infrastructure continues to suffer enormous damage due to air bombardments. Schools, hospitals and transport facilities are destroyed. Because of the continuing air blockade and impediments, arranged for marine transportations, it is very difficult to deliver food and fuel to the country. There is an acute shortage of medications due to which many Yemenis die from illnesses, which can be cured in our time. There is a catastrophic situation with the lack of cash in the north. Employees of the public sector have not been receiving their salaries during more than half a year.

Meanwhile, mainstream media prefer to keep silence about this situation.

The Western diplomacy, which supports its Arabian allies, also does not show interest in it on international platforms that sharply contrasts with its activity on Syria.

Of course MSM will remain silent about Saudis killing Yemen people, and with US and British made bombs to! What fricking hypocrites.