A U.S. government source told Reuters that Washington is concerned by Eritrea’s involvement in the ongoing conflict in the Tigray region.

The deployment of Eritrean troops in the northern Ethiopian region was previously reported by residents, refugees and TPLF leader, Debretsion Gebremichael.

“There doesn’t appear to be a doubt anymore. It’s being discussed by U.S. officials on calls – that the Eritreans are in Tigray – but they aren’t saying it publicly,” the U.S. government source told Reuters.

A senior diplomat from another country allegedly confirmed to Reuters that “thousands” of Eritrean troops are currently fighting against the TPLF in Tigray.

Tigray has been under attack by the Ethiopian National Defense Forces (ENDF) since November 4. The operation was ordered by Ethiopian Prime Minister Abiy Ahmed in response to an attack by the TPLF on several military bases in the northern region. 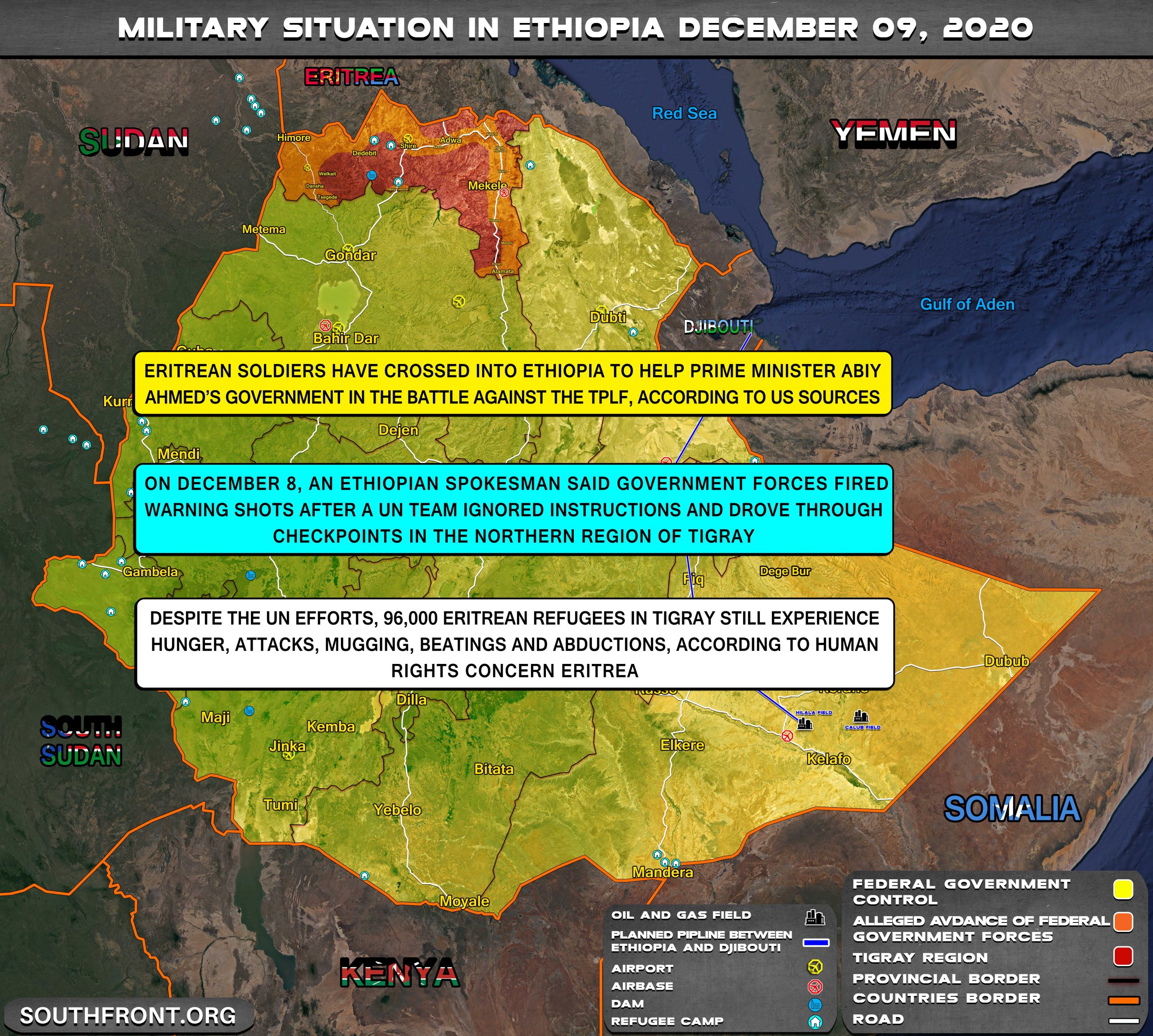 The ENDF captured the capital of Tigray, Makelle, on November 28. However, the battle in the region is still ongoing. The TPLF continue to show fierce resistance.

On December 8, the ENDF opened fire at a UN team in Tigray. Redwan Hussein, a spokesman for the government, said the team ignored instructions not to be in the area.

The ongoing conflict in Tigray, which will not likely end anytime soon, has so far claimed the lives of 611 civilians and displaced thousands others. The involvement of Eritrean forces, which signed a peace deal with Ethiopia two years ago, will likely inflame the conflict.

So who is Tigray and what they want?

There is more to that.

The Governess in Addis Abeba want a structure not based on tribes anymore even it works which makes sense or did.

In the other hand many tribes dont like that modernisation at all.

The tribe system in Etiopia has worked much better tne the declining ones in fx Syria, but they are too much in the old days too.

Ethiopia has possibilities for steppeing up. They do get and income by oil as well as they now makes a big dam for electricity and by that might solve their overpopulation.

One like me allow me to say, they should include more contraseption too. I think they work for that too.

wrong as always—Ethiopia has 12 distinct linguistic/ethnic groups. Syria is united by language and similar ethnicity, except for Kurds, Turkmen, Druze, Yazidi

Eritrean troops should remember to ask US for permission before they do anything. We cant plan anything if countries just send 1000 troops where and how they like it………………………..LOL.

This guy is fuking deluded. The US can’t even fight insurgency they run jackshxt

I partly agree. Too many like him are raised as some ghostbusters. USA as well as zionists are not all over, at they are learned.

Its more they for good reasons are a little overrepresented.

Even if it was true, it would be nice You proposed something better or at least had some oppinin for, what the Leadership in Addis would like to and the uprisers dont.

amerikans can’t plan except by yelp to find a macdonalds

As I have said from the start Eritrea will never again permit any TPLF regime to take power in Ethiopia, either Addis Ababa or any putative independent Tigray. After sacrificing 70000 lives in the 1998-2000 TPLF regime Ethiopian invasion, and with the city of Badme still illegally occupied by TPLF forces (despite a boundary commission award of the city to Eritrea, which Ethiopia had agreed in advance to abide by), Eritrea has at least as much stake in eliminating the TPLF as Ethiopia does. It wouldn’t be surprising for Eritrea to enter the conflict; it would be astonishing if it did not.