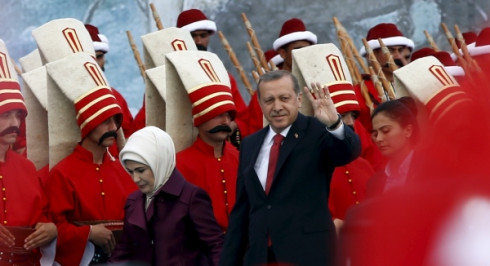 Turkish artillery is continuing to shell Syria’s border areas. This time the Minneh airbase, located on the outskirts of Azaz, was struck. It is occupied by the Kurdish Union of National Defense, which expelled Free Syrian Army forces after heavy fighting. This is not the first time Turkish forces have attacked Syria’s territory.  Kurdish Party of Democratic Union forces were shelled near Aleppo. These events have prompted analysts to almost unanimously predict a direct Turkish invasion of Syria which could trigger World War III. But let’s not rush to conclusions.

On the one hand, it does appear that everything is leading to the balloon going up. US is threatening Russia and Iran that it will start a land operation in Syria unless their combat operations are halted and they stop interfering with the Syria talks in Geneva. Ankara is categorically asserting its right to create a security belt on the border with Syria up to 150km in width. And, most importantly, Turkey now has active allies ready to join the fight. Turkish foreign minister mentioned the arrival of Saudi combat aircraft to the Incirlik air base. In any event, many media have reported that story, citing the statement by an adviser to the Saudi minister of defense. But all of that is entirely meaningless.

First of all, we still don’t know the name of the adviser. And Riyadh’s officials are maintaining silence on the matter. Likewise, no Turkish official has spoke out on this topic. A week ago, the Saudis merely expressed their willingness to send troops to fight in Syria, but only as part of joint coalition forces under US command. That statement was made by Saudi ministerial advisor Ahmed Asiri rather than anyone actually capable of ordering such a deployment. It would seem there are no actual Saudi aircraft in Incirlik. The Turkish newspaper Hurriyet has confirmed that, citing own military sources. The arrival of Saudi fighters is expected in two-three weeks.

Secondly, the US does not like the idea of Turkish military invasion into Syria. What is more, Washington has on many occasions recommended Ankara abstain from such actions. It reached the point of Washington being not so much under a fork, to use a chess metaphor, but a trident, namely the need to choose between Turkey, Iran, and the Kurds. Or, more to the point, between the Kurds and ISIS. Erdogan even publicly demanded the US make a choice.

The US made that choice. As usual, in a very ambiguous and vague manner. They demanded that Russia stop “destabilizing Syria’s humanitarian situation” and Turkey stop supporting ISIS and not escalate the situation in Syria by invading the country. The Turks cursed out the US, but obeyed. Because they are now in a zugzwang. No matter what move Ankara makes, it worsens Erdogan’s position.

It’s an interesting question, how did it come to this. The Turks, with some justification, don’t view Kurds as Syrians. Therefore they don’t view Syria’s Kurdistan as foreign territory. As long as Syria’s central government was strong, Ankara had no choice but to respect the situation. Now that it’s weaker, Kurdistan is a de-facto “tribal area” almost like in Iraq under Saddam, in other words, a territory which is only nominally subordinate to the capital. It’s not as autonomous as Iraqi Kurdistan, but it’s also not completely subordinated to Damascus. Therefore there’s a major risk it will become an autonomy. Since Syria’s Kurdish YPG and PYD parties closely collaborate with the Turkish PKK, that autonomy could quickly lead to the escalation of the national liberation struggle of Turkish Kurds. The Turkish Kurdistan is already the site of a genuine war.

But having made his bet on pan-Turkism (with a heavily Islamist tint) backed by force, Erdogan found himself forced to continue attacking or otherwise lose leadership. Now any attempt to make peace, with anyone, with Russia, with the Kurds, with Assad, would outrage his supporters who would accuse him of “betraying Turkey.” Which could be lethal to Erdogan himself. The East is not only complex, it is also highly emotional. Therefore he has to move his pieces forward all the time. Occupy the “security zone” in Syria. Continue shooting down Russian aircraft. Blackmail money out of the EU. Show that, of all the leaders if not the world then the region, he has the most steely, sizable, and heavy Faberge eggs…

Except that he has nowhere left to advance. Both NATO and the US categorically rejected his idea to send troops into Syria. Attacking alone would mean a certain defeat. He needs a coalition of some sort. Coalition with anyone. In order to demonstrate Erdogan assembled it and that “all the good guys will go after the bad guys.” But the Saudis don’t want to get drawn in. Even through such provocative moves as the whole story with Saudi aircraft.

Therefore the Turks have nothing left to do but to attempt influence the events on that side of the border with artillery fire strictly from its own side of the border. It’s not going to be very effective, but it’s better than nothing. The fact that there is almost no benefit from it is another matter. Aleppo will fall no matter what, which will end the prospects of the “green” opposition in Syria, opposition on which Turkey has placed its bets. After that, “everyone will go after ISIS”, and the Turks will be left completely empty-handed.

None of that has any relation to the start of WWIII. We’re simply looking at Erdogan’s desperate attempts to act like a leader while in a classical zugzwang. As usual in the East, attempts accompanied by enormously expressive rhetoric and energetic waving of arms. Well, as long as there are no global geopolitical shifts. But we shouldn’t expect any before December.