This text includes some questionable statements about the Russian air campaign in Syria. But we post it to show how really Europeans feel the Erdogan’s attempt to bargain using the refugees topic. 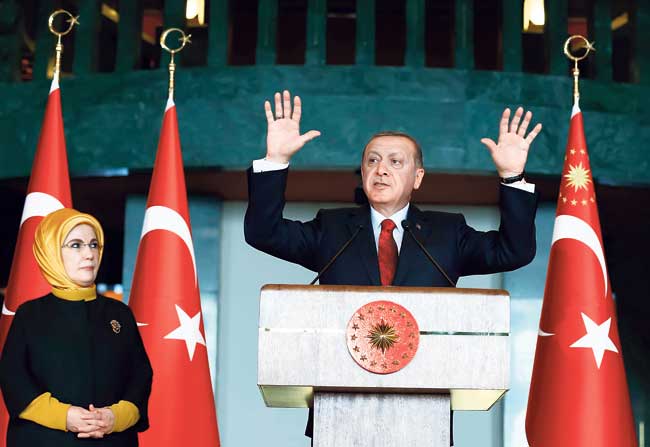 Apparently, Ankara wanted six instead of the three billion euros in order to keep the refugees from entering EU. Also, Syrian rebels are facing defeat in their main stronghold.

Turkey is holding almost 80,000 Syrian refugees on its border. That new wave, which is expected to increase by another few tens of thousands of people, gives Ankara the chance to put even more pressure on the European Union. Ankara didn’t hesitate in doing just that even before: as cited by the Greek portal euro2today.gr, which has neither been confirmed nor denied by Brusssels, last November the Turkish president Recep Tayyip Erdogan was blackmailing European officials for a payout of not the three billion euros as is currently agreed, but double that amount as financial aid, or he would otherwise let the refugees from his territory to enter the EU.

“We can open the doors to Greece and Bulgaria at any time and put the refugees on a bus… And what are you going to do with the refugees then unless we make a deal? Will you be killing them?”, were apparently Erdogan’s words to Donald Tusk and Jean-Claude Juncker, who was, as a former prime minister of Luxemburg, also reminded that his country is the size of a small town in Turkey.

If these statements are true, Erdogan has now acquired a new blackmail card thanks to his enemies, Syrian president Bashar al-Assad and his offensive on the main rebel stronghold in Syria, which is supported by Russia and Iran. The rebels are on the verge of total defeat in the northwestern part of the country, an area from which civillians are already fleeing. The hopeless situation the rebels are in has forced their sponsors from the West and from the region to finally notice that in the towns that are under long term siege – by Assad forces of course – and in which around 190,000 people live, hunger, thirst and disease are widespread and that people are collapsing on the streets due to exhaustion.

In recent times, like never before – even though that Syria has already lost a quarter of a million of lives whilst 11 million people had to run away from their homes –  there are more frequent reports about the humanitarian catastrophy in that country. Increased worry doesn’t have to be attributed exclusively to the fear that the rebels will be totally thrown out of the game: it is evident that tens of thousands of civillians are running away from Assad’s offensive and projectiles from the Russian airplanes – according to Human Rights Watch – even cluster bombs [SF editor: very questionable statement]. But, if the worry about the civillians is the main motive, more than the wish to save the rebellion against the Syrian leader, it would be expected that the pressure wouldn’t be put only on Russia to stop its bombardement in which not much attention is paid to “collateral damage”, but it would be asked of Turkey to open its borders to refugees too.

Europe though, is quite visibly abstaining from making such a demand and is, via Federica Mogherini, the high representative of EU’s Foreign Affairs only talking about the duty of Turkey to protect the refugees, which by now number almost 80,000 along its border. Not even a word is said about the fact that she shouldn’t just hold them in the camps on the Syrian side of the border and that they should be allowed across the border, to be safe from Assad and the Russians. Judging by the statements coming from Ankara, they have no intentions on doing that of their own free will.

Not even Angela Merkel, the German chancellor, the most powerful leader in Europe, used a chance to personally make such a request while she was in Turkey a few days ago. The goal of her visit tied her hands in even thinking about making such a request: the talks held were about how to help Ankara to keep the refugees in Turkey and not let them spill over into Europe. Seeing that Turkey already has 2.5 million Syrian refugees and that it is asking for huge financial aid from Brussels, Merkel would have found it very hard to think about urging her counterpars about agreeing to open their border and accept even more refugees.

The chancellor may have moral satisfaction that she opened Germany’s borders to refugees and accepted about a million of them, but as a politician, she must be having regrets as it is endangering her position. If the decline of her popularity continues due to something that more and more Germans feel is excessive generosity, it isn’t impossible for Merkel, if it didn’t happen already, to believe the judgement of Norbert Rethmann, the president of the Bundestag foreign affairs committee, that Vladimir Putin is trying to bring her down using the refugees.

There maybe exists a way to stop a new exodus of Syrians towards Turkish border. Assad’s minister of foreign affairs, Walid el Muallem has stated that there can be talks about the ceasefire, but only if Turkey and Jordan seal their borders towards Syria.

Muallem has, by using those words, pretty much literally quoted an earlier statement made by his Russian colleague Sergei Lavrov. The bottom line is that Jordan and Turkey transfer equipment and people for some of the rebel groups across their borders. Seeing that Russia supports one of the warring factions even more directly, Lavrov’s proposal is slightly paradoxical but in any case, it represents a way for the situation to at least temporarily calm down. Neither Jordan, nor Turkey nor the West had any reactions, at least not in public, unless some deal does come from it during the meeting of America, Russia and other regional powers, in a meeting dedicated to Syria, which should occur tomorrow in Munich.

Judging by the position of the special investigative team of United Nations, the deal between Washington and Moscow would at some point in the future have to include the extradition of Assad and other people close to him to the International Criminal Court in the Hague. As the investigative team stated, Assad’s team is responsible for jailing tens of thousands of civillians, which he kills by starvation and refusal of access to medical aid in horrendeous conditions of the Syrian jails. That brings the deaths on such a massive scale to the point where it can be equalled to a governmental policy of extermination of civillian population, which constitutea a crime against humanity, claim the UN investigators, due to which they asked for the case to go to ICC. But, such a decision can only be made by the UN Security Council, in which a Russian veto must be expected, with which she was protecting Assad from punishment due to his use of chemical weapons against civillians.

“Everything is dependent on the political will of different countries. It looks like that is missing in Syria’s case. Unfortunately, Syria is totally unpunishable”, stated, as quoted by Reuters, a part of the UN team, Carla del Ponte.

We shouldn’t hope that Assad will be extradited. As things stand at the moment, instead of asking that of Russia, America would be more than happy even if Putin, which he once said was a possibility, gave Assad an asylum in Russia. But the thing is, Syrian president no longer has a reason to run away. It can’t be foreseen that he would defeat all of his opponents but his position is, thanks to Russian intervention, strong enough thay he doesn’t need to fear for his personal safety any more, like the case was until a few months ago.

The worst side in the Syrian war, Islamic State, isn’t going too bad either. Although the Kremlin kept saying it is intervening in Syria to defeat IS, very few Russian strikes are going towards the “caliphate”, which is mainly situated in the eastern part of the country, but rather the main targets are all other oponents of Assad. For Saudi Arabia ans United Arab Emirates thus far it was enough to remotely arm the rebel groups, mostly the Islamic ones, so they themselves aren’t better than IS. Now, that Assad regained his ground, those two countries are offering to, should America decide for a ground intervention, send their ground forces into Syria. If they really had wanted a direct participation in the Syrian conflict, they could’ve at least not withdrawn last summer from the coalition’s air strikes, under the American leadership, against IS.

They made such a move as it was, due to financial depletion coming from falling oil prices, too much for them to fly above Syria and intervene in Yemen – even in that country they are trying to use as little of their own ground forces as possible and to instead, as is believed, send mercenaries from Africa and South America. Their budgets even now are not filled up any more than before either, so they probably only want their ground forces to go into Syria as leverage agai st a strengthened Assad, whilst the fight against IS is still lower on their list of priorities.

The muppets are keen to sanction Russia whose crime is to want to be an independent country but they are idiots when it comes to deal with the real threat. Sanction Turkey and the economy collapses.