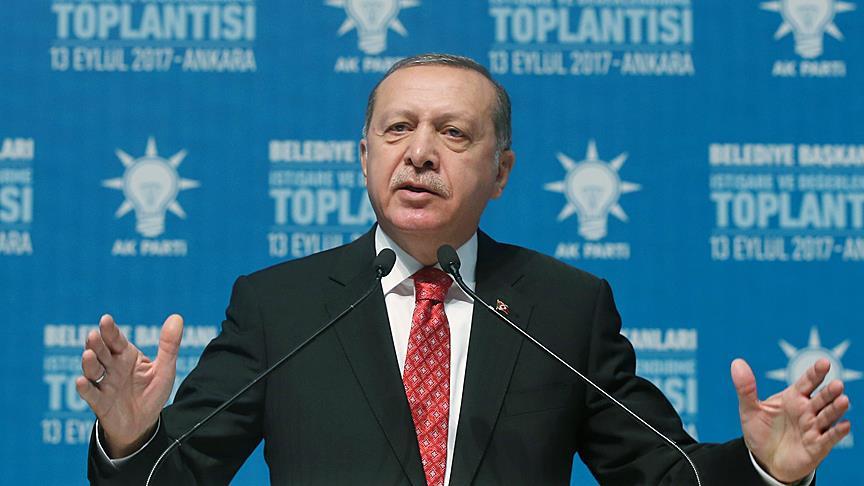 Turkey’s President Recep Tayyip Erdogan revealed that 25 people, including 5 U.S. soldiers, were killed in the recent terrorist attack in the northern Syrian city of Manbij.

“The information I have is news pointing toward that there are five U.S. soldiers and 20 died in total,” the Turkish president said during a news conference with his Croatian counterpart in Ankara on January 16, according to the Reuters news agency.

Erdogan added that he does not believe that the  attack will impact U.S. President Donald Trump’s decision to withdraw American troops from Syria because he saw “honorable Trump’s determination on this point.”

“The attack could be meant to dissuade the U.S. from leaving Syria,” the Anadolu Agency quoted Erdogan as saying.

Earlier, the US-led coalition confirmed that U.S. several members were killed in the attack, which was carried out by ISIS cells. The coalition refused to provide the exact number of casualties. However, a U.S. official told Reuters that 4 U.S. service members were killed and three other were injured.

In his comment on the incident, the Syrian Democratic Forces (SDF) spokesman condemned “the vicious terrorist attack” and said that US-backed forces will continue its war on ISIS.

“We’d like to extend our heartfelt condolences to the families of soldiers and American people. We will keep fighting hard to ensure stability and security in this region,” Mustafa Bali said on Twitter.

The SDF will likely take advantage of the attack to promote the need of U.S military presence in northeastern Syria. However, it appears that Erdogan, who has been in talks with Trump on a safe zone in the region, is confident that Washington will not reverse the decision.

USA Blow Themselfs Up To Stay in SYRIA

The Jews and Turkeys will fight to the last Americunt redneck.

Xoli Xoli
Reply to  MADE MAKER

Now Erdogan is speaking for Trump too? With Bolton and Pompeo that makes three of them. If Trump tweets something, I will bring it over.

That is within the realm of possibility. Others have more confidence in the security of his twitter than I do.

If he stops making public appearances along with his tweet storms, then I will suspect that he has been compromised on his account….and other things.

I can translate what Trump really mean and dont understand.

Your interpretation is always welcome Tommy. The Security team is currently in a meeting.

Never mind from here. I see, what actually happens. Even zig-zags is not enough to descriebe, what he says having a lot of memory lacks as well.

This is a bad joke that came to mind…….and all this time when I heard that Turkey was stealing oil, I thought that they meant petroleum. ;-)

Both the Turkeys and their Americunt masters are using looted Arab oil to fund Salafist terrorism in the region. The criminal ErDOGan’s whole family is involved in illegal oil business with ISIS. His son and son in law have made billions off Syrians looted oil.

If so, I dont see the oil is stolen at all. So far Assads has sold rights for oil to the Russians for the next 25 yars – asking the rest – No he didnt.

The possible amounts from only are to sending back sticks and stones. You have no proporations. If Turks still do, at You declare, it only make the Erdogan family rich.

Probatly more true Assad is Ayatollah and commander of the Russian army.

The Jews are maneuvering to add the Turks to their NE Syria secession project. And with the Russians failing to deter a renewal of IAF airstrikes on Syria, at least so far, after the recent SADF S-300 and other upgrades deployed to do exactly that. The Turks have got to be asking themselves if these top end Russian air defense systems actually work, and even if they do, are the Russians going to withdraw support and sell them out to the Jews as it appears that they’re doing with the Syrians, to keep them mired in Yinon plan conflict for years to come, when they were close to wrapping the war quickly.

Jews have genocided millions of Russians, mostly all Christian, before and have more recently blacked out the genocide of Christians in Syria and Iraq not to mention Trump ‘s Dec 11 signing of the Iraq Syria Genocide Relief and Accountability Act so i certainly wouldn’t put it past them. Thrones and Jews are as Thrones and Jews do. Makes you wonder who was behind Hitler’ s Generalplan Ost. In the end it was Christians that were slaughtered in the hundreds of millions while kings, queens, princes, princesses and court jews all remained in their thrones. Thrones and court jews btw that are vilifying and hating on China, Russia and Iran in all their policies and propaganda. Check out the pie chart to see who’s aligned according to Qatar / aljazeera (and notice the conspicuously missing Israel in the backers of the Yemen genocide) https://www.aljazeera.com/news/2016/04/yemen-war-foes-direct-talks-kuwait-160430105125034.html There’s an overt statement of “the enemy” in the Cybersecurity and Infrastructure Security Agency Act. If you can find the Act on the Fed just download and search the pdf for ‘China’:

No jkews are not. You say jews are. You mighht try to clean Your harddisk unless its Your whole ID.

As long as Russia keeps killing terrorists faster than the USA can make them, its all good in the hood

you are either wilfully lying or ignorant. possibly both

You only have to look at the despicable set up of 9-11 to understand that the loss of US lives means nothing to the anglozionists when it comes to implementing false flags to justify their wars.

The dumb fucker Erdogan is a bad as his Zionist masters and is crapping in his pants on the fear that his US masters will leave and then the Turkeys will be slaughtered by all sides. A recent German BND report stated, “what’s going on in northeast Syria with increasing US involvement and growing local dissatisfaction. This is the beginning of what happened in Iraq.”

How the Zionist game works… https://hateandanger.files.wordpress.com/2013/09/we-are-here-to-bring-you-democracy.jpg

dont you know that telling the truth is a capital crime in turkey?

Yeah u r right. Its even worse then in Saudi Wahabistan

Actually none of us knows whether Erdogan is an …… We dont have the background.

Is it illgal to be polite and nice for Turks too :)

Well lets obey the rules then ;)

Me and Bolton also strongly condemn this crime against humanity and innocent Americans, probably planned by dark shadow governments in Iran and Moskow.

Unfortunately it seems we have a President who requires more dead American bodies before he understand that Manbij have problems that takes time! Bolton are coordinating all these problems together with Erdogan, Macron, May, NATO, Salman, the Kurds, Nethanyahu, Abe and the US State Department.

The Manbij problems are not and cannot be not and will not be done overnight!

US jews and “Christian” zionists queued isis et al to attack within hours of the announced pullout: https://www.cnbc.com/2018/12/20/trump s-qqsudden-syria-pullout-will-embolden-isis-and-iran-allies-warn.html

and it didnt take long for some to try to reinforce the genocidists’ cause: https://sputniknews.com/amp/us/201901081071301287-us-senators-golan-heights-recognition/

No surprise if Netanyahu and his bimbos, Bolton and Pompeo, try to blame Iran for this as well.

So weird how you critique two deserving ugly and cunningly evil men by smearing them as attractive but silly women. Misogyny much?

Really? Who do you know that would ever pay old, ugly, toxic flesh connected to evil warmongerish minds for fun? Of course, warmongering is extremely profitable for these monsters, but that’s a particularly villainous form of whoring based on exploding flesh.