According to Turkish President Recep Tayyip Erdogan, Moscow and Ankara have agreed on joint actions to withdraw terrorists from the Syrian city of Aleppo. 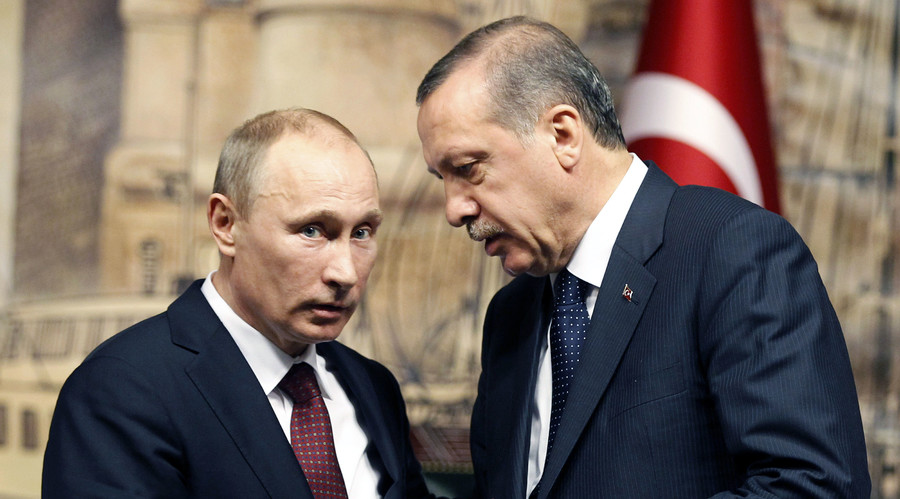 On Wednesday, during a meeting with heads of local administrations in Ankara, Turkish President Recep Tayyip Erdogan has announced that Russia and Turkey have agreed on joint efforts to withdraw terrorists from the Syrian city of Aleppo.

“Yesterday, I spoke with Putin [the Russian President]. We discussed with him Aleppo. He said that from 22:00 pm the bombing will be stopped there. He expressed a wish that the al-Nusra [also known as the Jabhat Fateh al-Sham] should leave the city. We have given necessary instructions to our colleagues and have started to work in this direction. And we also discussed an agreement on how to drive the al-Nusra out from Aleppo and provide peace of residents of the city, and for this we need to work together,” the RIA Novosti news agency quoted the words of the Turkish President.

He also added that Turkey has reached an agreement with the US military on the issue of participation of the Turkish Army in the operation to liberate the Iraqi city of Mosul from terrorists of the Islamic State (IS) group.

“We have reached agreements with the United States, with their commanders, generals on the participation of our Air Force in the operation in Mosul. I hope that we will be able to agree on other issues soon,” Erdogan stressed. “Turkey will ensure its safety in any place, where it is needed, and therefore the republic [Turkis military] will in Mosul,” he added.

since when are those ypg moderate rebels? they have uprised against the assad government. the ypg is the frontman of the US. it is the strongest US proxi in this war. stop calling them sdf. if you call them sdf, why don’t you call those terrorist moderate rebels?

do you really think the kurds want peace. they don’t want a strong nor a stable syrian government. they will never give up their arms and military equipments. not even with a federal kurdish state in syria, not even with that which i doubt will ever be tolerated by syria and it’s allies.

the kurds just will not give up till they receive what they want. a second israel and a second kosovo. the need those weapons and military equipments. and they will need it more after they declear an independent kurdish nation by their own.

the ypg is the most dangerous party in this war. right now, because of turkey, who always refuses to even start a talk with the kurds, there are only two options. either confront the kurds through military operation where the risk is very high with a direct war with the US airforce or more. second one would be to watch the kurds declearing a federal kurdish state, which willl also lead to a major conflict which will involove turkey, US, iraq, suni, syria, iran and so on.

syria must stay one as it was before. but the kurdish factor makes it impossible.

the only way to solve this problem would be a radical change in turkish politics toward the kurds. without that change, there won’t be peace. if turkey changes it’s politics, we will have the foundation to at least starting a peaceful solution which will kick out the US, the main creator of this problem, in the kurdish question. if you want to cut the ties between the kurds and the US, you find a better solution for a independent kurdish state, which will need not only turkey but also iran, iraq and syria to sacrifse..

Maybe rather than 3 countries “sacrificing” part of their territory, maybe the kurds should stop trying to steal land for themselves and learn to get along wherever they are?

right now, only by force but the problem is that the kurds are a US proxi enjoying full US aids from the air.

the only peaceful solution is to take the US out of this kurdistan solution. it is the same way the pheelipens are going. the south china sea conflict was a chinese-US conflict. if you take out the US which has absolutly no right to get involved in this conflict, you will find a peaceful solution.

the same goes for the kurdistan solution. you would not only solve this matter peacefully, but also to stop kurds relying only to the US. you will be able to break the US-kurdish relation which will destory an important strategic card of the US in that region. that means a well backed up peace among the countries affected.

I think we are in a great season of change. In 100 years, just as it was 100 years before now. I doubt we shall have the same set of players that exists today. The Kurds may rise and hold their indeoendence or intentions, dreams of such but, they could just as well be wiped back into being a particular culture without a shred of control or authority, beyond a restricted local reach. From my perspective, it will be more than just a bit interesting as to what will become.

Turks are nothing but rats. Good thing my forefathers kicked them out of Europe in 1683.