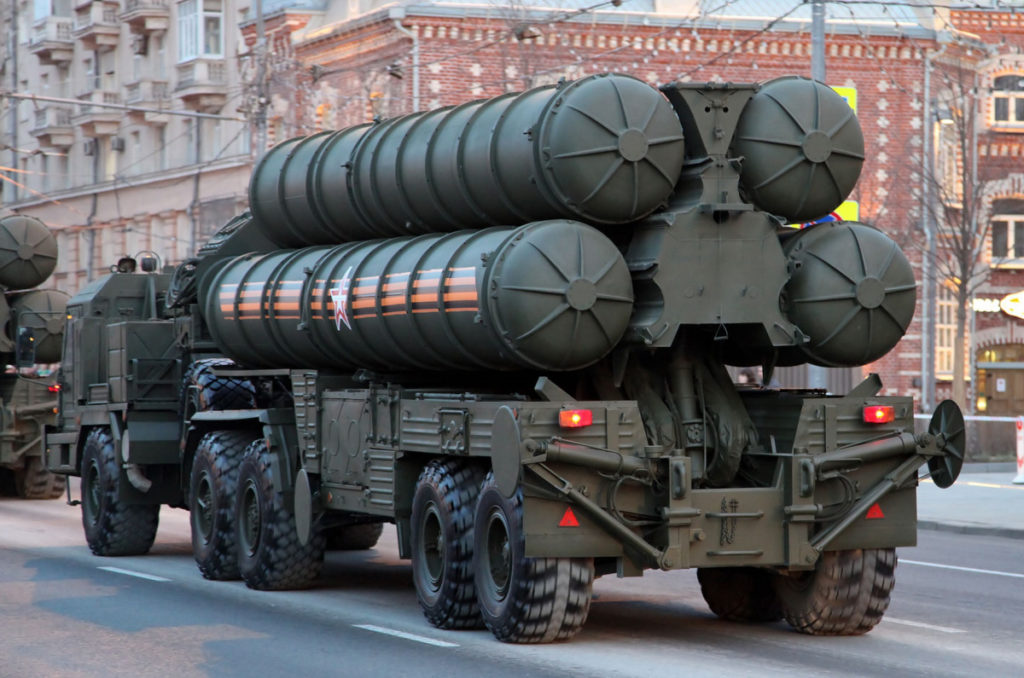 “Russia has given us a loan for the S-400 on very reasonable terms. In the second and third stages, we will proceed to joint production. Maybe we will co-produce S-500,” Erdogan said also making critical remarks towards the NATO allies over their unwillingness to sell arms to Turkey or jointly produce them.

“I have contacted President Putin with a proposal about the joint production of the S-500.”

However, Erdogan provided no info about a Russian response on the S-500 joint production proposal.

In December 2017, Ankara officially signed a $2.5 billion agreement with Moscow on the delivery of S-400 air defense systems. Turkey will be the first NATO member country to acquire the system. According to data from the Turkish media, the country will buy two batteries of S-400 missiles which will be manned by Turkish military personnel.

Ankara has described its decision to buy S-400 systems by its growing defense needs and the unwilligness of NATO member states to sell weapons.

Yeah, right. Putin’s going to give you the keys to the technology. Let’s give the little tyrant the technology so he can sell it to the west. Nobody is that stupid. Erdo, you’ll be buying the customer version, not the domestic one.

BINGO! Sorry, I saw too late your post. I wrote up here aprox. the same like you. Oh God, this attempt is SO CHEAP, even a drunk kolkhoznik would dig it.

This, is Rather Strange and intriguing. Are The Russians Going to Gift Erdegan S-500 technology and ALL of the Space and Satalite technology? What exactly is it that the Turkish have that the Russians could possibly want? No no, that is to easy… Putin is waving Delicious treats in front of Erdegons nose, If this is the Case than Putin has an endgame for Syria and Turkey. Cleaver. < Misspelled (Clever)

Are The Russians Going to Gift Erdegan S-500 technology and ALL of the Space and Satalite technology?”

Do you really see Putin so stvpid? :)) Putin has other stains on his soul,, but no cracks in his brains..

Shlomo.. say your Breitbart to s*ck my cheney and now go back to your Hasbara sh*t-hole and count your shekels.

Well, if the Russians did give the Turks the S-500, this would not only Make turkey the next target of America and Holy hell, we joke in the comment section but the Europeans would… Probably Start Preparing for war.. Russia Would just be eviscerated for 1000 years by US Media… Its not that Russia doesn’t want to bail her Syrian friend out in a time of need, the repercussions will go beyond Sanctions.

What I think this is really all about, are 2 things. The Turks are looking ahead, they want to Sway the Silk Road in favor of Turkey, Being very open, willing and in sight. The Russians, are looking to Bail Syria out, This is something personal I think. You have to be a Russian to understand. The Closest Analogy I can come up with is “A friend will bail You out of Jail, but a True Friend will be with You in the Jailcell”

The Turks clearly want to cozy up to the Russian, Chinese Alliance, Lets not kid around, this is where all of the money is. If Erdegon actually said this. he Let Slip Russias longterm Plans for the Middle east, He effectively Told the whole world Exactly what is going to hapten over the next 25 years. That would mean there are in fact Secret Meetings of world leaders who have all agreed on Syria.

The G6 G7 would be, bullcrapp, Propaganda. If Erdegon actually Said those words… He Let Slip a big one.

I wonder if Erdogan would be willing to license, produce and sell Russian hypersonic missiles?

That would be a sweet deal for Russia, throw in nuclear weapons, heck, Russia’s entire portfolio, no strings attached.

Sure.. :))) Doesn’t he want to jointly (sic!) produce Russian nuclear subs and some BULAVA-missiles? ;) And Putin is so stvpid to bite in this cheap hook, right? This Erdogan looks more and more like a mini-Trump lost by Bosporus.

JOINTLY PRODUCE, haaa-ha-ha! What for? Russia has no money to make them alone, right ? :))))) And TURKISH scientists are… world-wide known as super-specialists in.. in what? Sheep-cheese?T

This is so transparent, that little a##hole would like that Putin gives him FOR NOTHING the whole Russian technology.. and then Erdogan sells it everywhere in the NATO for dirty money on his private accounts ( like with the ISIS -OIL, bombed by the Russkis)

Nailed it Siegfried!! and no, neither Putin nor the Russia military technology industry is stupid enough to peddle their technology to a crook like Erdogan. I suspect Putin is dangling prospects of riches in front of Erdone’s nose ………. he will bite in return for jointly cleansing Northern Syria of Salafists and returning Chechens and Uzbeks to Firing Squads staffed by Syrian and Russian troops while Kurds will be spanceled with a short leash, separate and apart from US, French, UK, Italian and other assorted criminally encamped western and Israeli-allied personnel in NE and East Syria. Meanwhile, any transfer of technology to the Turks will be booby-trapped by the Russians.

On one hand, if Turkey Paid for the Technology, this is one thing. but We have Syrians to worry about oh and most importantly How will the rest of the world react to the Russians Selling.. Unlisted and unseen by the Media Extremely efficient technology left and Right. Russia would Never hear the end of the shitstorm that would follow. Even if the Russians wanted, they Simply cannot. Very Strongly I predict many wars as a result of the transfer of next generation technology.

If Erdogan still work as a US and NATO agent then Erdogan is a traitor and soon Turkey will be destroyed. US and NATO should never be trusted.

as usual, I see no mention neither in the article or the comments, that this is mostly a big “fuck off” to the US threats of sanctioning Turkey buying S400s.

As usual, you have to eat some sh*t to please your NWO-Kosher-Nostra scvmbags. Greetings to Theresa May.. and bye-bye (Try an AVATAR with a White-Helmet, it suits you better)

this dawg got rabid of late. pity, there ‘s no cure but elimination.

Why would Turkey need antiballistic missiles and advanced radar for its defense? Unless it is a political dig at US against sanctions and F35 deliveries. Erdo even said if US does not provide the F35s, he will buy the Suk 57s…….which would be a more intelligent decision.

Such a funny character this Erdie. What could he offer in the way of technology? If he were at least loyal and not a backstabber.