He is seeking Joe Bidens advice 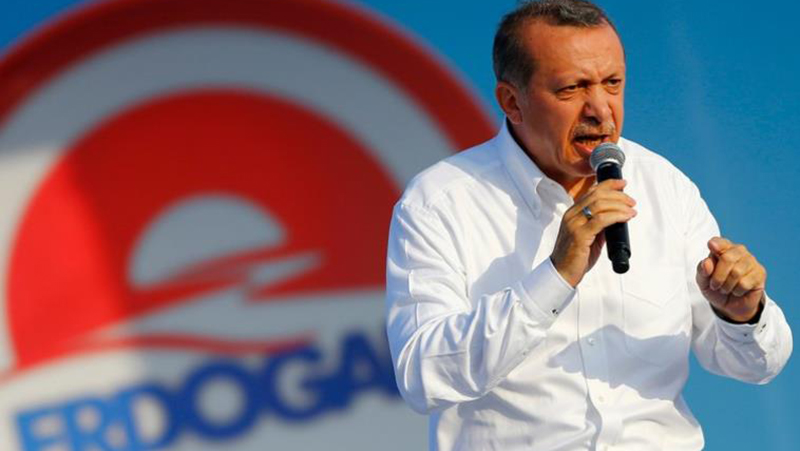 Turkish President Recep Tayyip Erdogan is worried over the alleged presence of Russian engineers near the country’s Syrian border amid rising tensions between the two countries.

On Friday, over the alleged presence of Russian inspectors at a Syrian airport near the Turkish border Erdogan told reporters: “We have said this from the beginning: we won’t tolerate such formations along the area stretching from the Iraqi border up to the Mediterranean.”

Turkish President also said that he planned to discuss the matter with US Vice President Joe Biden on January 23.

It was reported earlier that Turkey has dug defense trenches and increased security forces along its Syrian border though Moscow repeatedly stated that its goal wast to combat terrorists in Syria.

Turkish president did not address underlying cause for his panic which was Ankara’s downing of a Russian fighter jet in Syrian airspace and that incident lead Russia to deploy S-400 air defense system in Latakia base of Syria. Russia also deployed warships to the Mediterranean to defend any potential threat.

“They thought that we would turn tail and run. No, Russia not that country,” last month Russian President Vladimir Putin said pointing to Turkey . “We have increased our presence in Syria, have increased the number of combat aircraft deployed there. There was no Russian air defense system there – now there’s the S-400,” he added. “If before, Turkey had constantly violated Syrian airspace, let them try it now,” Putin declared.

Since YPG has proven to be one of the most efficient forces against the terrorists, Turkish president Erdogan continuously defaming that militant group as terrorist organization. Some analysts suggested that Erdogan, by defaming YPG, had been trying to save his ISIL business partners. Moscow has already pushed for YPG inclusion in Syrian peace talks but Turkey has refused.

Regarding YPG, Erdogan also told the reporters that there was no difference between PYD, YPG, PKK or Daesh. He said, “We will discuss this with Biden tomorrow.”

“We have said this from the beginning: we won’t tolerate such formations along the area stretching from the Iraqi border up to the Mediterranean.” Recipe Erdogan

Big talk from the psychopath who like his Israeli Mercan masters thinks war is slaughtering old men, women and children with free USSAN weapons and tanks and German handouts for sealing his USSAN paid for concentration camps. However, when you murdered that Russian pilot for your Washing town owners, punk, you entered a whole new league. Either the Turkestan military yobs pull the Kemal option and finally off this Recipe for disaster mutt or they will be fighting a real army after Russia is finished dispatching the Turk terrorists inside Syria

ERDOGAN is a Zionist-lover, and a human-hater. He is an enemy of all. He has proven this HIMSELF, with his deeds and those he has killed and IMPRISONED.

I’d fight the Turks. Maybe everyone should go into Syria if Pinhead Biden and Erdogan think they should go. Everyone, grab your guns and defend Damascus!