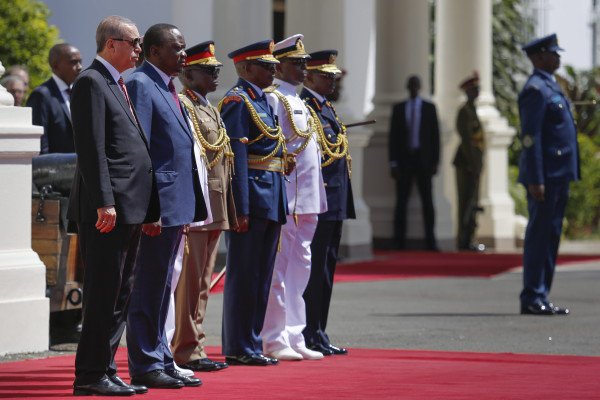 After the withdrawal of his ambassador from Germany, Turkish President Erdogan has announced further steps in response to the Armenian resolution. He wants to proclaim these after his return from Kenya. Steinmeier fears an overreaction of Turkey.

The Turkish President Recep Tayyip Erdogan, who is currently in Kenya, on Thursday spoke out on the vote regarding the Armenian resolution in the Bundestag.

According to Haber TV, Erdogan responded on a journalist´s question at a press conference in Nairobi: “I recently talked with our Prime Minister. As a first step, we have withdrawn our ambassador from Berlin for consultations. When he comes back, we will sit down and discuss this issue, which might potentially trigger significant tensions between Germany and Turkey. They have the potential to have an impact on the relations between Germany and Turkey. After my return to Turkey, we will consult and advise on the way forward. Then we will consult on those future steps, who are really necessary to solve this problem.

I will sit down with my friends from the Foreign Ministry and discuss the resolution, which was adopted by the German Bundestag. ”

Shortly before the polling, Turkish Prime Minister Binali Yildirim had said: “They really want to make us responsible for the events in 1915. Whenever states, regarded as our friends, slide into a weak domestic situation, they try to draw the public attention into a different direction”,  the newspaper quoted Takvim Yildirim.

Federal Foreign Minister Frank-Walter Steinmeier fears a potential “overreaction” of Turkey after the vote. “I hope that we succeed in avoiding over-reactions during the coming days and weeks,” Steinmeier said on Thursday on the periphery of his visit to Argentina, as the Foreign Ministry in Berlin reported. Steinmeier is skeptical towards the decision of the Bundestag; due to his trip he did not attend to the debate and vote in Parliament.

In his statement, Steinmeier now stressed the close ties between Turkey and Germany. “And that goes far beyond political relations between governments as well,” he said, referring to the three million people of Turkish origin in Germany.

After the polling, the Turkish parties CHP, MHP and AKP have issued a joint declaration, sharply condemning the decision of the Bundestag. “We condemn the resolution, which has no historical or legal connection with the events of 1915”, T24 quotes the release.

On Thursday, the Bundestag overwhelmingly accepted a resolution condemning the crimes against Armenians in the Ottoman Empire as genocide. Chancellor Angela Merkel did not participate in the vote.