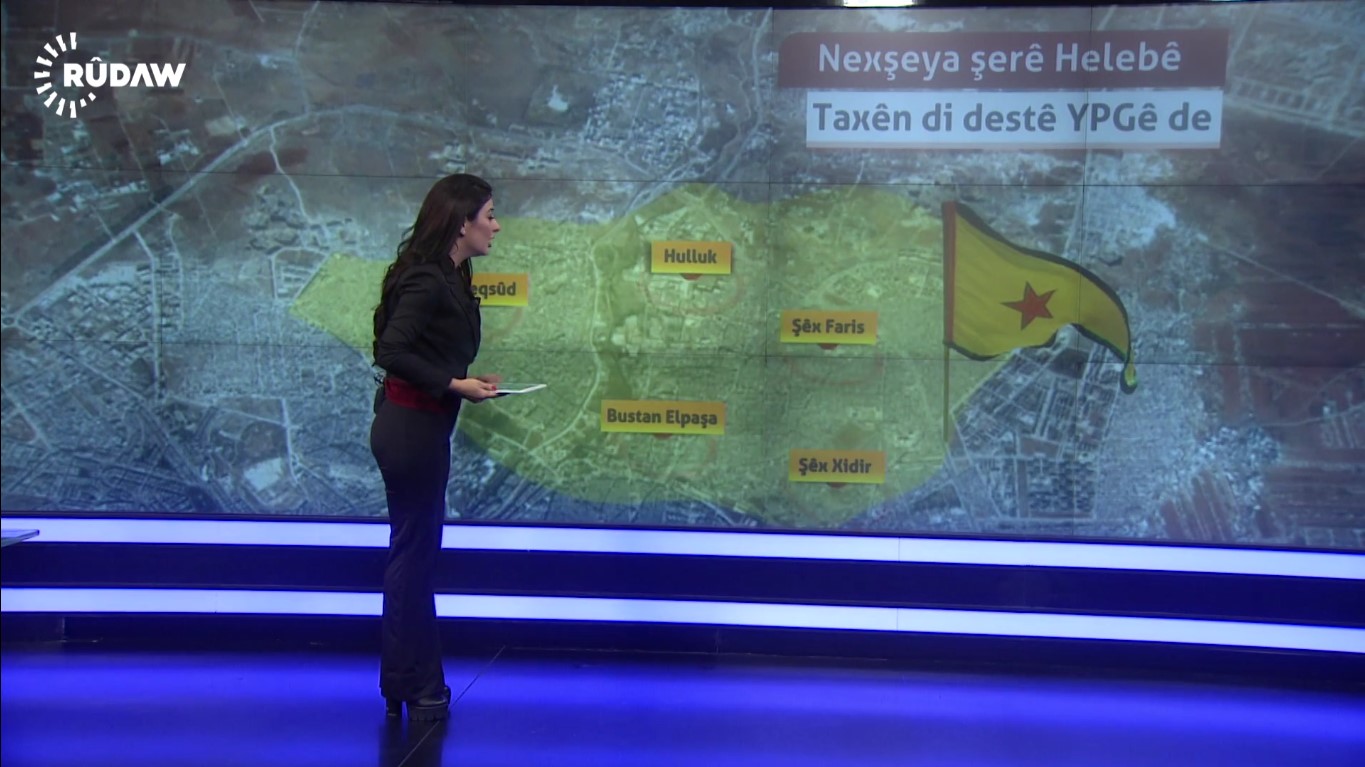 A screenshot from the Rudaw video

Another epic fail in the media coverage of the ongoing battle for Aleppo has been commited by Iraqi Kurdistan-based Rudaw Media Network.

While the mainstream media was saying that “regime forces” commited war crimes and Aleppo residents fled from the Syrian army’s advance, on November 30 Rudaw just decided to show “some gains” of the Kurdish People’s Protection Units (YPG) inside the city of Aleppo.

According to Rudaw’s map, the YPG is in full control of almost a half of Aleppo city. The map in the video shows that  the neighborhoods of Sheikh Maqsud, Bustan al-Basha, al-Halek, Ayn al-Tell, Sheikh Khender, Sheikh Fares and a major part of Haydariyah neighborhood are controlled by the YPG.

Probably, Rudaw’s editorial staff forgot to check the real military situation on the ground in Aleppo. So, here you go:

Sheikh Maqsud remains the only Aleppo neighborhood under the full control of the YPG. Some YPG units were also observed in the western parts of Bustan al-Basha, al-Halek and Ayn al-Tell alongside with Syrian government forces. 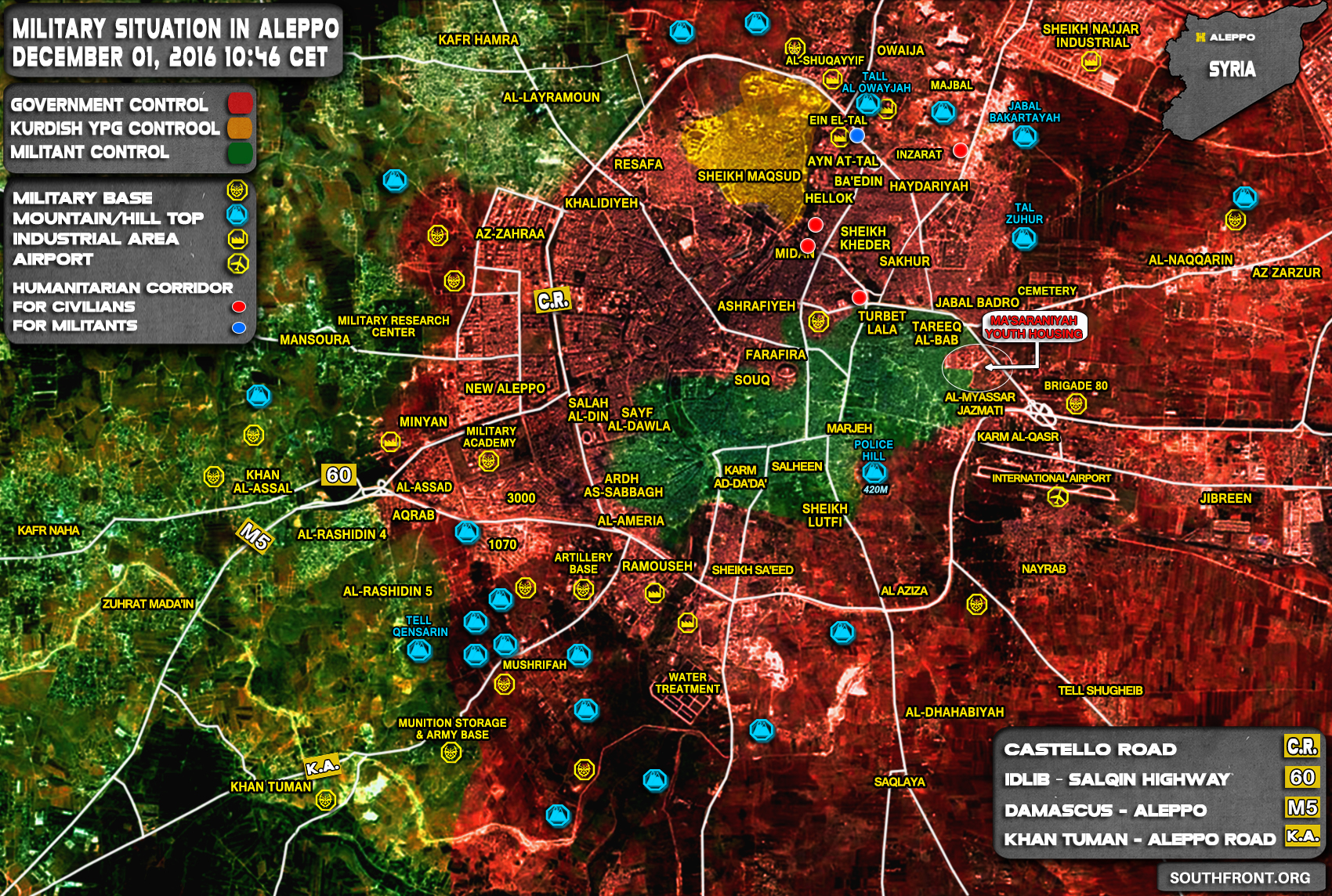 Yesterday, another promiment media outlets, AFP news agency failed to find Aleppo city on the Syrian map and reported that Aleppo city is an opposition bastion near Damascus. Later it was pushed to delete the video with this claim.

Such events clearly show the real quality of the coverage of the Syrian conflict in media outlets around the world.

The map was sourced by info from capable American investigation journalists https://uploads.disquscdn.com/images/0b4e09ce5c935f05d9098f8684ca3ffddf2983432e93c43c6aff6a5aefa9ec6a.jpg

Rudaw is a CIA/Mossad run website, their job is to agitate the Kurds for separatism. They attempt to do this by rewriting history, making up exaggerated and or outright fake news about “Kurdish persecution”, and or making up exaggerated or fake news about “Kurdish conquests”. Their “jounalists” are regularly present in Zionist Washington think tank meetings.

Of course in reality the “Kurds” are not a nation and never were historically, they are simply an Iranian tribe similar to all the other Iranian tribes that make up the population of Iran, however due to a mix of reasons they are always the easiest target for separatist agitation. Whenever foreign powers have attempted to interfere in the region they have bet on the Kurds to push their geopolitical interests. Whether it was Stalin who created a Soviet Socialist Kurdish republic on Iran’s soil in an attempt to annex Iran’s territory or the modern Anglo-Zionist empire that is attempting to disintegrate and destroy the region for Israel’s sake the Kurds are always pawns for foreign powers and they always get backstabbed in the end since no one respects a pawn including the owner.

ohhhh…Rudaw is a CIA/Mossad run website?? im sure u r pro russian, otherwise u wouldnt write like that, but the thing is, if u r fighting propoganda, then dont do it!! and keep ur imperial comment for urself. Maybe u can try to help kurds and look how they are treated in those countries and try to save other civilizations, otherwise only Russians and Arabs will be left in our world,start by teaching Russians how to deal with Africans(Blacks) . According to ur comment, me as Kurd, i would say, Viva US Constitution!! and dont forget about other civilizations, otherwise u would be a Nazi, living only for ur money and race and animals do that, or wht do u say??

Of course I’m pro-Russian, what else would I be? Pro American? Pro Israel? Pro terrorists? You obviously missed the point of my comment, as I said there’s no such thing as “Kurdish civilization”, there never was a “Kurdish nation” or “Kurdish civilization” in history. This is part of your deceit and rewriting of history that was started first by the British empire and is now being propagated by US and Israel in order to agitate for the separation of Kurds and the disintegration of all Middle Eastern states. Kurds are a tribe not a nation, historically they were part of the Iranian civilization.

I don’t condemn every single Kurd of course but within the Kurdish people there’s a lot of self-deceit and lies. You want to create an illegitimate Kurdish state by carving out land from all other Middle Eastern states eventhough there has never been a Kurdish state in existence. You want to become the Ukraine of Middle East, basically a people who’re part of another civilization but claim to be a separate nation, you will end up stealing land, history, identity, and historical characters of other civilizations and call it “Kurdish”, you’re already doing this today. You will end up a failed state just like Ukraine and will become vassals of US and Israel as is intended. There is a reason Israel and Netanyahu are so pro-Kurd. I will never support your illegitimate cause.

come on…im really direct in my talk… let me explain now: Your so called Civilizations(EU or Russia or Turks or whatever shit it is), i consider them raiders, criminals, mindmanopulating, thieves and the list is long..before WW2,those CIVILIZATIONS had War over other ppl, as it was a game and considered everyone an animal, French even made a Zoo of ppl to watch them as animals, do u consider France a Civilization or a thieve and assaulter for that specific issue??? did u know, that Beer was discoverd in ancient Egypt(NOT ur FANS—> arabic Egypt) and Germans never payed for the Licenses!!!Eventhough they made it their style(the German Civilization Style)… it is a shame, that u say tribes about kurds(even if empirial historicals say that),because its kind of cruel, answering that, let me remind u that all politicians Black and White sit together at the UN and discuss world issues. Now do we consider africans tribes?? or we consider them FAMILY with europeans(because of their COMMUN languages). they dont have an ancient Civilization, neither U…if u talk about illegitimate then try explaining the Creation of Pakistan or the Funding of Lenin with US Dollars!! or those wounderfully made african countries. There have been no one making a civilization since europeans came to the world, including Russians, they raided and brainwashed the world, split countries and destroyed real Humanity(Humanity is not sending all those africans to South America and shitting on all the world and selling clothes to africans for their WORK) or that time u and ur illegitimate cause werent there to solve the issue, because Lenin was there and talked more than hell supported by US Dollars…and u cant believe through whom!! through pre Nazi-Germany and the Civilization of Switzerland!! i hope my info is not wrong, because am talking about great Lenin and i should for sure know about Hitler even if i am a KID, because he was a part of the German CIVILIZATION!!!!!!!!!! So it was great knowing those GREAT Civilization and Britain, i mean u figure it out… i know this Website is russian and open it everyday, but i only comment on kurdish issues, and if Russia was illegitimate, it would just deploy the news here, without their nasty Titles. so dont talk about kurds and their country if u r not a kurd, and ask ur country to stay annonym in this world, then a lot of civilizations would come to light. And Viva US Constitution, did actually Russia build an economy in this world or is it still depending on oil,gas and arms so Viva Russian Civilization!! i dont have to do with Israel or Ukraine or the rest of what u said and DONT support my cause.

I’m not, I was mainly referring to the separatist Kurds and those who’re willing to sell their alliance to the highest bidder. Unfortunately these types of sentiments are more prevalent in the Kurdish community compared to other peoples.