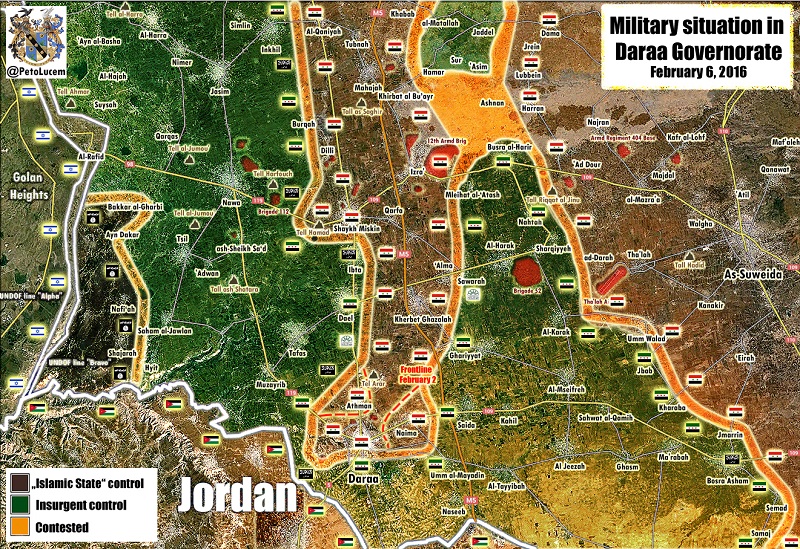 Map by Peto Lucem, text based on Al-Masdar details.

Yesterday the Syrian Army took full control over AL-Naymah town. The lightning offensive began in the East of the city of Daraa in the evening on the 5th of February.

This is new Syrian Army victory over the militants in less than 18 hours after the liberation of the Atman city located in the North of Daraa along the strategic M5-highway.

Thus, two towns on the perimeter of the capital of  Daraa province have been captured by government troops amidst heavy ongoing bombardments by the Russian Air Force and Syrian Arab Air Force.

Reconnaissance by the Syrian security forces indicate than the rebel defensive line thinned out due to a major redeployment two weeks ago and subsequent loss of manpower at Daraa city.

According to military sources, the Syrian Arab Army’s 38th brigade of the 5th armored Division stormed the fortified area of  Jabhat Al-Nusra   and the so-called Free Syrian Army (FSA) inside Al-Naymah.

Jihadists flee to the easte, towards the city side.

The defensive line inside Al-Naymah had been heavily weakened due to a serious relocation of militants to Sheikh Meskin two weeks ago and subsequent big losses in the battle of Daraa, as Syrian Intelligence reports.

It explains how the Syrian Arab Army managed to capture the city without encountering stubborn resistance of the terrorists.

After the release of Al-Naymah and Atman, the army was able to secure a wide supply route from Damascus to Daraa.

Earlier, Syrian commanders had the opportunity to use only secondary roads and helicopters to deliver the troops inside the city of Daraa. 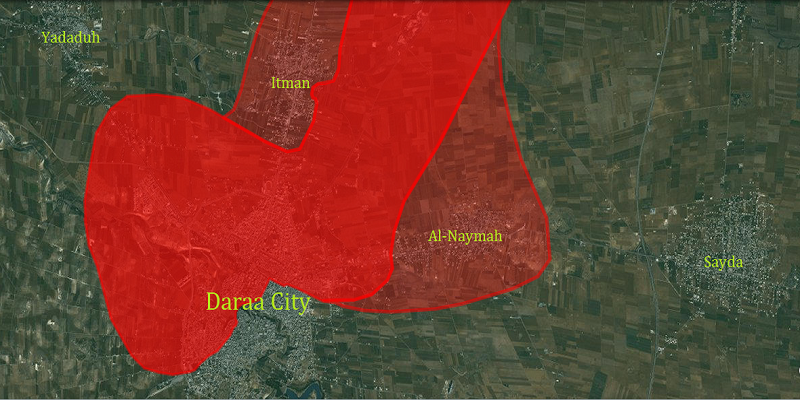 Saida is most likely axis of advance, that will allow to rip enemy forces and overwing Daraa from the east.
Further advance towards Kahil and Al-Mseifreh imminently will entrap opposition forces to the north-east of Daraa.