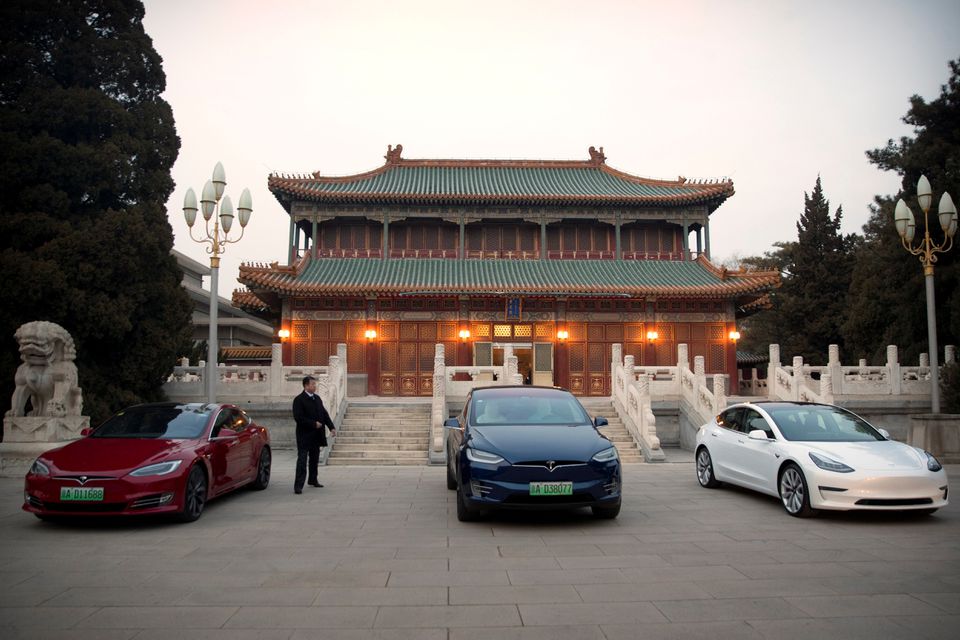 This comes at a time when relations as bad as they have been since the Cold War-era.

“There is a lot of talent and energy in Russia and I think there should be more dialogue and communictaion between Russia and the United States,” Musk said via video link at a forum on Russian education in Moscow.

Musk said that a potential part of the world where Tesla could open production sites is Russia.

He said that the company already had production sites in China and the United States, but was looking at opening production facilities in other parts of the world.

And one could potentially consider that Musk is in a peacemaking mood and is attempting to mend fences between the rivals, and that would be entirely false.

This is, very obviously, a simple business maneuver.

In China, Tesla is struggling.

Tesla has attracted unwanted publicity lately, with a disgruntled owner climbing atop one of Tesla’s display vehicles at last month’s auto show and shouting that her car’s brakes had failed, causing a crash.

That was quickly followed by two rebukes from government entities that said the EV maker should respect Chinese consumers and comply with local laws.

On May 17th, a traffic policeman was killed and another injured in a crash involving a Tesla. Another incident earlier this month is also still under investigation after a Tesla rear-ended a truck, killing the driver of the EV, according to a Global Times report. The cause of that crash isn’t yet clear.

Tesla said that it will fully cooperate with the relevant authorities in the investigation after a Tesla vehicle reportedly ran into two traffic police who were on duty in Taizhou, leading to the injuries of two traffic police, with one in severe condition and later died. The driver of the vehicle has been kept under police supervision.

This came after a Tesla rear-ended a truck in Shaoguan, South China’s Guangdong Province, on May 7th, killing the driver of the electric car, media reports said. The cause of the accident is still under investigation.

Demand of Tesla is plunging in China, and government has its sights set on Musk’s business.

Meanwhile, ever since March Chinese military have been absolutely banned the use of Tesla vehicles by staff and employees.

Tesla cars are prohibited from entering People’s Liberation Army facilities and housing complexes. The government is concerned that the omnidirectional cameras and ultrasound sensors on installed in the cars can lead to security leaks, according to the sources.

Chinese authorities, including the State Administration for Market Regulation, said it investigated two Tesla subsidiaries in February. In addition to safety issues, such as rapid acceleration and battery fires, the authorities asked the Tesla side about the suspicion that the automaker is taking user data out of the country.

Chinese regulations mandate so-called new-energy vehicles, including electric and plug-in hybrid cars, to offer real-time driving data, such as vehicle location and battery usage, to authorities. Suspicion has been raised that Tesla has not followed this requirement.

Most recently, on May 20th, Staff at some Chinese government offices have been told not to park their Tesla Inc (TSLA.O) cars inside government compounds due to security concerns over cameras installed on the vehicles, two people with knowledge of the matter told Reuters.

As such, Tesla’s business in China is struggling, as it appears that even copious amounts of money aren’t enough to overcome Beijing’s legislation, which according to the West, of course is incredibly corrupt and turns the other way when it comes to various atrocities.

As such, Musk is now looking for ways to diversify its business and produce cars at locations that would cost less than establishing more factories in the US.

Russia would do well to learn from China’s example in dealing with the situation.

Russians with Honor and Proud should only buy Russian,Korean or Chinese Cars.

Russia and China do not boycott US products, Russia doesn’t favour many Chinese consumer products. Russia, China and North Korea (the latter with no automotive industry to speak of) are also globalists that side with jewish supremacists. The rest of political theatre.

Many of those who had a chance of challenging their power were assassinated in one way or another, whether by character assassination or actual murder:

Ghana has a good President he is still alive, or Evo Morales is he also a globalist ? Nana Addo and Evo Morales are my favourite Presidents

obviously a dimwit—both Russia and China sanction and place tariffs on US trash….which means little since incompetent amerikans can only flip burgers

Tesla is valued at $750 billion (They make 500 thousand cars a year) Tesla has no assets they rent every factory and lease all equipment. The profit on a car is $7,000 which gives Tesla approx $3.5 billion to pay for R&D insurance Dividens to shareholders Advertising Taxes and Services.

Volkswagon make 6.5 million cars a year, own all their factories, own their equipment, own nearly all the franchaise sites throughout many many countries worldwide. All this land and city centre sites are viable assets.

Total value of Volkswagon $124 billion ….. if you’re thinking something doesn’t add up YOUR RIGHT

FUN FACT: No one would by those computers on wheels they call “cars” if it weren’t for the governments subsidising the electric car market into existence. They want us to be dependend on them so that when you post something “antisemetic” on twitter, your car will “accidentely” take a dive into the river, with you inside.

You are correct, Elon Musk is a creation of the alphabet agencies designed to give a warm, fuzzy, ” civilian ” multinational flavor to its operations and is fully funded by those agencies.

One of the purposes is to blanket the whole world with Star link satellites ( for convenient internet of course ) underneath the noses of the target governments.

Additionally, Tesla cars are just spy cameras / sensors with wheels which constantly stream everything to servers back home ( Langley, VA ). Even though China has caught on to Tesla’s military spying, it still allows Teslas to drive around its civilian infrastructure which is just as bad and stupid. Imagine tens of thousands of these cars driving around constantly monitoring China and its society.

Finally, Putin is a fool if he has anything to do with the Elon clown and ” his ” products. However, I dont think Putin’s a fool, he just works for the other side.

This comment section is getting worse and worse. A year ago there were only a fraction of the number of trolls. I can’t read this shit anymore.

Trap has turned Gay (and is proud)
Reply to  ruca

Musk would prefer a Russian government subsidy to initiate operations there. Nyet!

Musk is a con artist, never trust him.

Which ever way one paints it, the fact that these cars are dangerous to everyone around them is very obvious. Some accidents can be down to the stupidity of drivers, but not all. Remember the Ford truck that used to combust in an accident due to its poorly designed fuel tank. That killed plenty but was defended to the last. It seems that nothing changes.

The Chinese admin have obviously deemed them unsafe. The camera and sound problems are an excuse only.