The revolutionary movement will join FARC-EP in the peace dialogues held with the Colombian government. 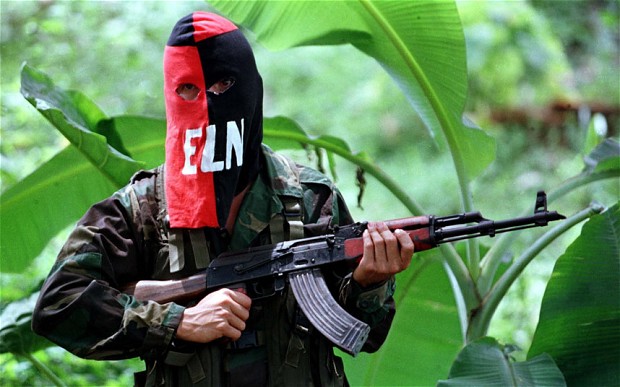 García added that the different democratic processes that are being experienced in Latin America allow the identification of people’s problems, fact that pushes the continent’s leaders to find solutions in benefit of the majorities. “Latin America is opened to changes, thus Colombia also wants to be part of that process for ceasing the violence”, García claimed.

On his own, Commander Pablo Beltrán assured that the process will take place in fice different countries: Chile, Brazil, Ecuador, Venezuela, Cuba and a sixth nation that will perform as a peace guarantor: Norway. “We want that this great Latin-American and Caribbean family keeps supporting the Colombian people in this searching of peace, (…) therefore, this region, as it was said by CELAC (Organization of Latin-American and Caribbean States) and UNASUR (Union of South American States) will be a zone of peace”.

Also, the insurgent spokesman considered that “there will be peace in Colombia as long as this Great Homeland (Latin America) helps us building and looking for that peace”.

Beltrán also made comments on important aspects of the agreement adding: “We are going to take violence out of politics, (…) Dialogues in the table are one thing, and reality is another completely different”. According to the insurgent spokesmen, some of the aspects that are going to be discussed in the negotiations are quite similar to the ones that are being treated in La Habana, Cuba since 2012. Among them:

Also, ELN expects that para-militarism (illegal armies that carry out unlawful assassinations of civilian population) won’t become an obstacle for the achievement of peace.

Commander García praised the efforts made by the President Juan Manuel Santos for enhancing these political close ups without considering the use of arms as his predecessors did.

ELN, the second major guerilla of the South American nation and the government of Juan Manuel Santos defined the route that aims to establish a final agreement to put an end to a conflict that has lasted over fifty years and also aims to agree on transformations in the search of a peaceful and equal Colombia.

The dialogues between ELN and the Colombian government emphasizes as the main aspect in the agenda, the participation of society in the construction of peace by means of initiatives and proposals that make it viable.

Ecuador will be the headquarter of the peace dialogues and also will be one of the guarantors of the process altogether with Venezuela, Brazil, Chile and Cuba.

*ELN is an insurgent guerilla with Marxist-Leninist orientation and pro-Cuban revolution. They have taken part in the Colombian armed conflict since 1964, year of its conformation.

The ideology of ELN contains elements like the use of armed struggle to denounce and promote the solution of social needs of the population in regards to national and international exploitation, besides pointing the rest of failures and injustices inside a democracy they don’t actually consider as such.

ELN is a member of Foro de Sao Paulo (Sao Paulo Forum), an association of parties and organizations of left and extreme left-wing political stance tendencies.