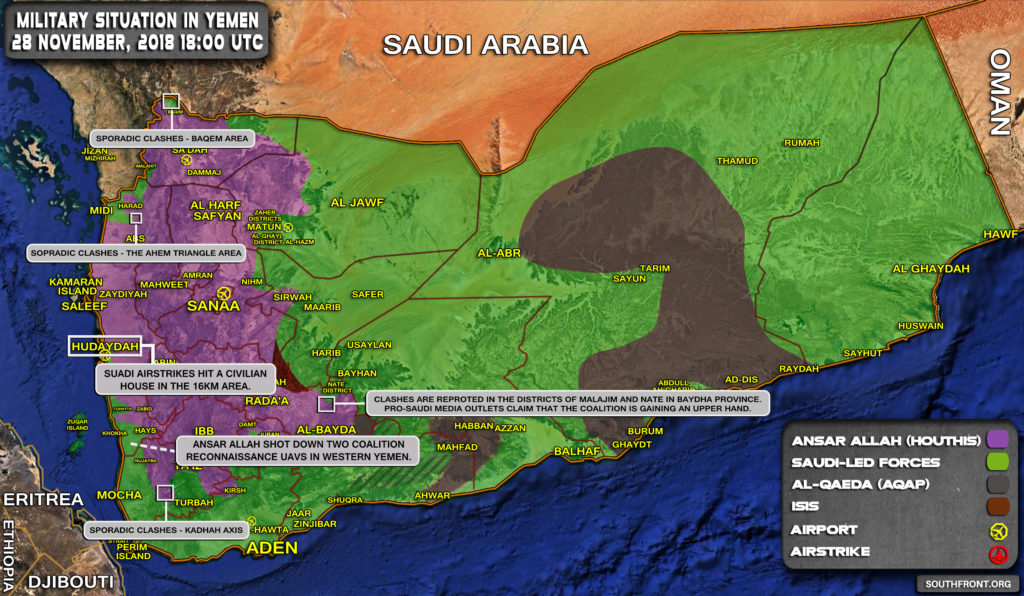 While in western Yemen clashes are ongoing between the Houthis (also known as Ansar Allah) and forces loyal to the Saudi-UAE-led coalition, Egyptian satellite company NileSat has reportedly taken Yemen’s al-Masirah television channel off air.

The alleged reason of the NileSat decision is its affiliation to the Houthis, which lead the local resistance to the Saudi-UAE-led coalition intervention in the country. The broadcast was cut on November 28 evening.

A spokesman for the Yemeni movement reacted to the situation describing the decision as an illgal move.

“The Saudi-led aggressors cannot silence the channel. Nilesat’s decision is in line with the Saudi-led onslaught against Yemen. There are other options to counter this move. The measure confirms that we are on the right track, especially as invaders are preparing for major crimes in Yemen,” he said. “The fact that the international community is talking about the establishment of peace in Yemen and cessation of weapons sale to Saudi Arabia is the result of public pressure. This explains why the Saudi-led coalition is trying to silence al-Masirah TV station. We will continue to expose the crimes of aggressors by any possible mean.”

Al-Masirah TV is the main media influence tool of the Houthis and their allies to influence to the regional and international audience. So, of the pressure on the TV channel succeeds, the Houthis’ limited propaganda capabilities will be limited even further.

The Egyptians have tight censorship laws, this is not surprising.

Egyptians are just pimps of the region. They also attacked Yemen in the 60’s and lost with 20,000 dead and wounded and never came back even the Saudi headchoppers offered the Jew stooge Sisi $10 BILLION in 2015 and write off all debts. However, the Egyptian military is already losing in Sinai to the local Bedouin insurgency and hardly in a position to send third rate mercenaries to Yemen.

haha Sisi the Jew is upset as the much heralded Saudi scumbag cowards “offensive” petered out fast and as the map shows, the Ansarollah now control the only road into Hodeidah and have moved further south and inflicted serious losses on the whole mercenary coalition. Both Abdul Malik Houthi and Sayyed Nasrallah warned that much worse is in store if the Saudi, Emirati cowards and their mercenaries don’t leave Yemen.

Indeed, Morsi was the only elected popular president of Egypt overthrown in a CIA/Mossad coup. Egyptians will rise again despite the draconian repression where 20,000 opposition and public members have been jailed, vanished or tortured. Even the Shah’s SAVAK was not as brutal as Sisi’s military dictatorship.

It was Morci by very false flag was elected and right away tryed to make Egypt into a country religios extremisme.

Nothing strange in change back to the militaries. Putting in CIA and Mossad into that make me laugh.

But of course its a regional tradtion, that anybody else then Yourself are responsible for every thing.

Hard to see the connection to the article. Fine with me Houtis have less TV.

Arrh, I normal person having written the article. Thanks.

The Egytiens themselves made it. They choosed extremists, which right away tryed to make a constitution millions and millions would not have.

Som they now have, what they came from. Even Mubarak is alive.

Who will hear Houti’s calls for help as they are exterminated? Egypt and every Sunni dominated country will turn against the Iran-Houti coalition. They believe Iran will do to them as they are doing to Yemen and Syria.

Stay off the drugs, even for a hasbara nut :)

How many Sunni dominated countries are still supporting Houthis?

Houthi extermination started some time ago. Many are already starving even more are sick. The war is coming to their cities, villages and homes. Many more will die before it is over. Those mercs hired by Saudis will kill just because they like to.

You need something like Khat to calm you down. Even the US puppet Senate just passed a resolution to cut off direct military support for the Saudi losers.

What in the world is Khat? Do you really believe Trump will sign anything that supports Iran-Houthis? Far more likely Trump will send direct Military Mercs and whatever it takes to defeat Iran in Yemen.

A propos Egypt, Nasser from Egypt was there too before I was born.

There has been war and terror both way since I remember. During those many years, I have seen Houtis exterminate too.

Houthis-Iran will exterminate Saudis if and when they can.

You really got it wrong. The mad war mongols from both sides wants that. The maon part of the rest – as in Syria and Iraq – wish they were in hell many years ago.

The Saudis and their criminal puppets are paying a heavy price for invading Yemen. The US congress is about to cut off direct military support for the Saudi cowards.

BEIRUT, LEBANON (11:00 P.M.) – The Houthi Movement launched a ballistic missile at a Saudi Apache helicopter base in the Najran Province of southern Saudi Arabia this evening.

According to the official media wing of the Houthi forces, their rocket battalion fired a Badr-1 ballistic missile this evening at the Saudi Apache helicopter base.

The Houthi forces said that their Badr-1 ballistic missile scored a direct hit on the Apache helicopter base, killing and wounding several members of the Saudi Air Force.

The Houthi forces added that they managed to destroy and damage a number of Apache helicopters that were present at the base. From videos posted on Yemen’s al-Masirah TV, at least a dozen helicopters are seen burning along with hangers and administrative buildings.

When will You read the article ? Or will You.