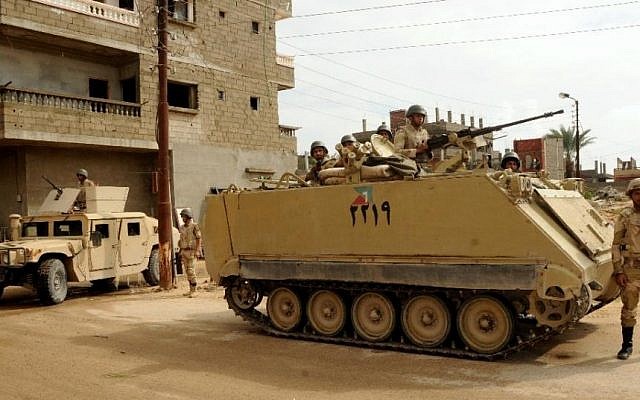 Egyptian President Abdel Fattah el-Sisi confirmed that the Egyptian military is in contact with Israel over its operation against ISIS in North Sinai.

He spoke in an interview on CBS’ 60 Minutes, which reportedly the Egyptian government is trying to pressure the network into not airing. Despite the pressure, CBS claimed it would air the interview on January 6th.

The alleged reason behind the calls not to air it is due to discussions of human rights abuses and civilian massacres attributed to el-Sisi.

Asked by interviewer Scott Pelley if Egypt’s cooperation with Israel has reached its highest level for the formerly warring neighbors, el-Sisi responded, “That is correct…We have a wide range of cooperation with the Israelis.”

Reportedly, the presence of approximately 1,000 ISIS-affiliated terrorists on the Sinai Peninsula has led to a military agreement between Israel and Egypt, iNews24 claimed. According to the alleged agreement Israel is allowed to launch airstrikes on Egyptian territory.

Egypt also needs to keep contact with Israel, since the two countries have a post-war deal which limits the Egyptian military’s ability to deploy troops in North Sinai. After 2013, Israel has allowed Egypt to deploy more troops than originally permitted for the purpose of countering terrorism.

Heavy weapons, like tanks, artillery and attack helicopters, have been brought into Sinai to fight the terrorists.

Co-operation between Israel and Egypt first gained a wide media attention in February 2018, when the New York Times claimed that Israel was engaged in a full-blown aerial campaign against Islamic State targets in the Sinai, carried out covertly with Sisi’s blessing. Following the report, Egyptian Army spokesperson Col. Tamer a-Rifai denied the claims and said that Egypt’s security forces are the only ones combating terrorist in the area.

Neither country has up until now admitted that the countries are co-operating.

Sisi has met twice with Israeli Prime Minister Benjamin Netanyahu since 2017, in a sign of improving relations between the countries. It was thought that they only discussed the situation in Gaza, but it could be reasonable that they also discussed the revealed co-operation.

The request by the Egyptian Ambassador to CBS not to air the interview is reportedly only related to the discussion of Sisi’s role as army chief and defense minister during the political unrest following the Arab Spring. He became President shortly after that.

The Egyptian official allegedly expressed concern with questions regarding a 2013 incident in which Sisi ordered police to raid two Muslim Brotherhood camps, resulting in the massacre of over 800 civilians.

Asked by Pelley if he gave the order, Sisi apparently questioned his interviewer’s information and said, “There were thousands of armed people in the sit-in for more than 40 days. We tried every peaceful means to disburse them.”

Sisi also denied any allegations by human rights groups that on his orders more than 60,000 political prisoners were held and mistreated.

Sisi denied the accusation, asserting “I don’t know where they got that figure. I said there are no political prisoners in Egypt. Whenever there is a minority trying to impose their extremist ideology we have to intervene regardless of their numbers.”

I would be more comfortable if egypt did not consort with the enemy which is the only way to look at israel, an enemy that by necessity must be defeated and the occupying thieves/murderers/concentrationcampoperators made to run as far and as fast as possible!