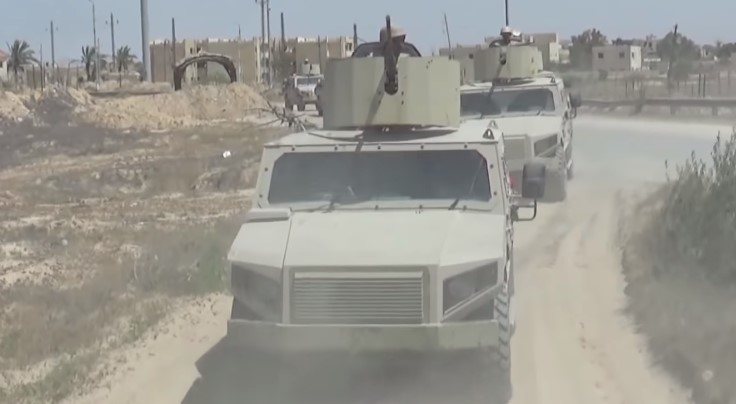 Egyptian forces have killed at least 32 militants in two separate operations in the province of Northern Sinai, according to a statement released by the country’s military.

According to the statement, the Egyptian Air Force alos destroyed two vehicles loaded with weapons and ammunition and 21 hideouts of the terrorists.

In February, the Egyptian Army and security forces launched a wide-scale operation against militants, mostly members of ISIS, in Northern Sinai. According to data from the Egyptian military, 318 militants and 37 military personnel have so far been killed. The operation is still ongoing.

A total of 272 hideouts of militants were discovered and destroyed, and 250 wanted criminals and suspects were detained.

Fellow Muslims! The enemies of Islaam have amassed whatever they can of different types of invention in order to fight this deen and its adherents and to conquer them ideologically and intellectually. Their action says: “A cup of alcohol and a songsters can do to Muslims more than what a thousand machine guns can do, therefore, plunge them into the depth of materialism and lusts.” These enemies lay siege on Islamic state through mass media and modern technology and attack us through devilish and lustful satellite channels, which ruin morality and chastity. They aim at destroying our youths, by arousing their passion and spreading immorality within their ranks, making them thereby searching for all possible way to satiate their already aroused lust. The Muslim woman is also not safe from this devilish plan. They wage war against her Hijaab (i.e. covering of the Muslim woman’s body and head) and they strive to deceive her through those repulsive fashion houses, they encourage her to mix freely with men, making thereby ignominy and distress her lot. https://i.ytimg.com/vi/u23v-cQEYic/maxresdefault.jpg

Did IAF warplanes support Cairo’s assault this time, too? Or is our sole sourse of info intent on hiding that fact?