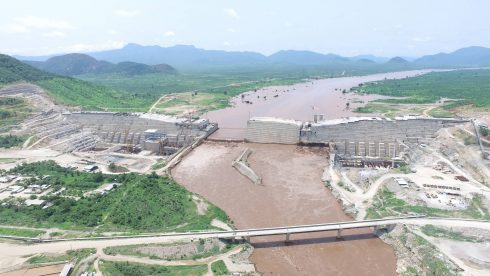 Egyptian-Ethiopian tensions have been high for a while. The Ethiopian Water Program is still perceived by Cairo as a threat to its national security involving a dispute over part of the Nile waters, and it is far from being the only hydropolitical dispute in the world today. Egypt’s Irrigation Minister Mohamed Abdel-Aty said this week Ethiopian authorities in Addis Ababa are refusing to accept a coordination mechanism over their Grand Ethiopian Renaissance Dam (GERD) pertaining to operations with Cairo’s own Egyptian High Dam. Abdel-Aty claims his country does not object to GERD per se (set to be the largest hydropower generation in the continent) and has agreed to other dam’s projects by Nile Basin nations such as Uganda, however an agreement is needed. In any case, talks are stalled and Ethiopia is filling it up without reaching a compromise with Egypt regarding the terms of down-water retention, a contentious issue.

The GERD has been an Ethiopian goal since the 1950’s. It has become a matter of honor and national pride for Ethiopia (national survival, even), which aspires to become the largest electricity producer in Africa. The project is expected to improve electricity access tremendously, producing over 6,000 megawatts of power, thus doubling the country’s electrical production and raising living standards. In order to do so, however, it will, like all dams, retain huge volumes of water that will no longer flow downstream, thus potentially causing a reduction in the river’s water levels. While Egypt is concerned about droughts (it already suffers from water shortages), Sudan, in its turn, worries about the Ethiopian dam overflowing and flooding its own lowlands. Moreover, the Ethiopian initiative may encourage other Nile Basin countries to build even more dams in a kind of water race.

It is not an exaggeration to say that water diplomacy has been the very core of Egypt’s foreign policy. Herodotus described Egypt itself as “the gift of the Nile” (in the 4th century BC) and indeed the river has been the very air Egyptian civilization breathes, with about 90% of its population living in the fertile belt areas surrounding it, to this day. Egypt has been the regional hydro-hegemon in the Nile Basin for a long time, by means of a number of coercive measures and containment strategies, but such hegemony is now being challenged. The Nile River’s basin spans across Eritrea, Kenya, Congo, Burundi, Rwanda, Tanzania, and Uganda, besides Egypt, Sudan, South Sudan, and Ethiopia.

For Cairo, however, its hydrological strategy is a matter of national survival: 97 percent of Egyptian water needs are met by accessing the Nile River. Cairo’s 2021 Human Development Report, which was produced in cooperation with the UN Development Program, estimates that the filling of the GERD could seriously impact water’s availability in Egypt, thus reducing  the per capita water share and affecting several economic activities.

In this case, transparency is the key to deescalate tensions and it is up to Addis Ababa to allow for independent studies into the dam’s impact. Moreover, a revised Cooperative Framework Agreement is badly needed. Meanwhile, Ethiopia faces its own internal tensions over the Tigray conflict. In December 2021 the Ethiopian government radio agency Fana Broadcasting reported that Sudan was actively supporting the Tigray Liberation Front, a charge the Khartoum government has denied. However, earlier in 2021,  Sudan had hinted a number of times it could supply its logistical and military support to the Ethiopian rebels as a kind of retaliatory measure against Addis Ababa’ water policies.

It is worth remembering that the Sudaneses civil war itself broke out over the government’s decision to build the Kajbar Dam on the Nile. Many hydropolitical conflicts are also related to the Tigris and the Euphrates River (and their minor tributaries). The idea that future wars may be over water (rather than oil) has become a kind of common sense. Water conflicts are rising worldwide and mostly on the intra-national local levels but often on the international level too.

From 1950 to the year 2000 there were 1831 water conflicts, according to a 2003 UNESCO’s  International Hydrological Programme article. In Iraq, for instance, there are strong water-related conflicts among tribal groups in the provinces, while Baghdad is always concerned by dam constructions by both Iran and Turkey. In Central Asia, there are ongoing tensions over the Aral Sea basin involving Kyrgyzstan, Tajikistan, Iran, Afghanistan, Kazakhstan, Turkmenistan, and Uzbekistan. In April 2021, the worst border clash since the 1991 independence took place between Kyrgyzstan and Tajikistan over their water dispute.

Water wars are not limited to North Africa, Central Asia, and the Middle East, though: in the context of the Russian-Ukrainian conflict, in 2020, Kiev blocked the North Crimean Canal, thereby causing serious humanitarian problems and a water crisis, as the Canal provides about 85% of Crimea’s drinking water.

There is a very obvious connection between water, energy, and even food. Water viability in terms of commercial resources encompasses fishing, agriculture, tourism, navigation, and a number of other human activities – in fact it can be considered as valuable as oil (or even more so), since it is needed by virtually every industry.

Rather than population density, or even technical aspects pertaining to the level of development, the key to prevent water conflicts from arising might be found at the institutional level,  in terms of treaties, cooperation and management bodies, and of course, good diplomacy – besides transparency. Managing water access equity is thus one of the great challenges of the twenty-first century, and we should expect to see many more disputes and conflicts, both internal and international, emerging over this resource.

Ethiopia is allied with Turkey. At least, Egypt didn’t fall to Muslim Brotherhood.

I wouldn’t discount the MB in Egypt so easily.

This kid, Chris Gr is rtded for real… “At least, Egypt didn’t fall to Muslim Brotherhood.” Hahaha…he can’t be that stupid. I don’t understand people like “him”. Don’t tell him nor argue with him, he is for sure a rtded troll.