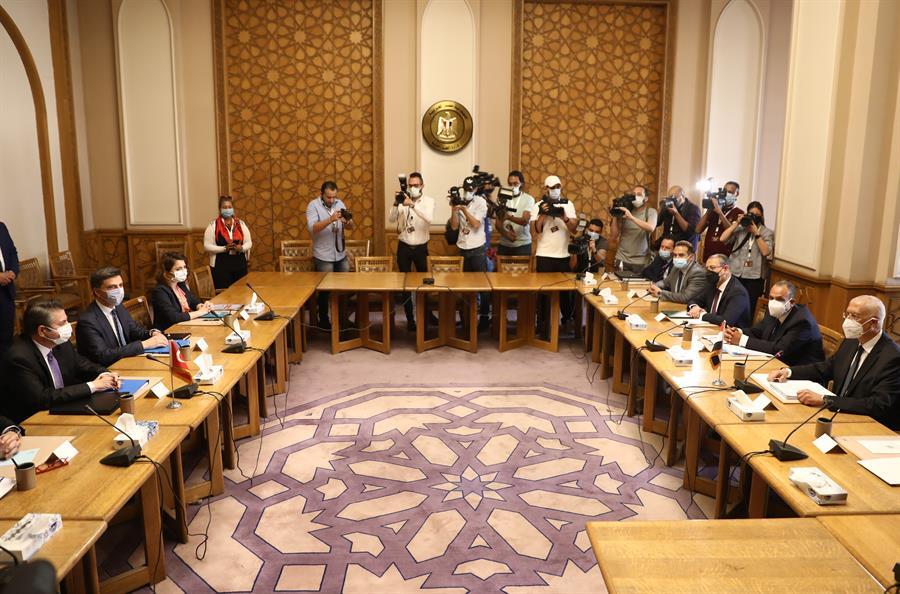 On May 6th, Egypt and Turkey held talks on the conflict in Libya, where they back competing factions, on Syria and the security situation in the eastern Mediterranean, in an attempt to reach some sort of normalization in relations.

The discussions, held over two days and led by deputy foreign ministers, were the first high-level public talks for years between the two countries.

After the talks, Turkish foreign minister Mevlut Cavusoglu said there was “a positive atmosphere” in Cairo.

“Discussions will continue on the steps that can be taken to normalize relations in the upcoming period,” Mevlut Cavusoglu told TRT Haber, Turkey’s state-run news channel.

On a question regarding the two-day meetings of Turkish Deputy Foreign Minister Sedat Onal and his Egyptian counterpart Hamdi Sanad Loza in Cairo, Cavusoglu said that upon the invitation of Egypt, the Turkish delegation had previously announced that it would visit Cairo.

“As emphasized in the joint statement, the meetings were held in a positive atmosphere. Our friends discussed bilateral relations and what could be done about it,” he said.

“We always say that Egypt will also profit from cooperation over here. When the relations improve to that level, we will discuss them as well for sure,” he added.

Turkey has been striving to mend fences with several U.S.-allied Arab states including Egypt. Egypt has so far responded cautiously to Turkish overtures.

“The discussions were frank and in-depth. They addressed bilateral issues as well as a number of regional issues, in particular the situation in Libya, Syria, Iraq, and the need to achieve peace and security in the Eastern Mediterranean region,” a joint statement said.

“The two sides will evaluate the outcome of this round of consultations and agree on the next steps.”

Turkey is ready to hold a tripartite meeting between Turkish, Egyptian and Libyan officials to agree on disputed issues in Libya including the presence of foreign fighters, two Egyptian intelligence sources said.

Reuters, on its part, cited anonymous sources who claimed that the Turkish delegation also told Egyptians that Ankara could not hand over Muslim Brotherhood leaders wanted by Egypt, adding that most of those leaders had now legalized their residency in Turkey.

Turkey says it remains opposed to the Muslim Brotherhood being declared “terrorists” by Egypt, despite asking Egyptian opposition television channels operating on its territory to moderate criticism of Sisi’s government.

Turkish officials did not comment on the content of the talks. However, Turkish Vice President Fuat Oktay said Ankara is fully open to improve its ties with every country in the region, not just Egypt.

“So Egypt and Turkey moving together will provide serious contributions to the region’s peace and development. God willing, we will see this in the coming period,” he said.

Ankara and Cairo had a long way towards the beginning of bilateral talk. In April, Egypt suspended normalization talks with Turkey, citing Ankara’s failure to meet its demands, especially the ones related to the situation in Libya, as the reason. In a few days, Turkey has laid down a detailed roadmap to normalize relations with Egypt within five months. Ankara reportedly informed Cairo of a timeline for the withdrawal of Syrian militants from Libya.

“Turkey says it remains opposed to the Muslim Brotherhood being declared “terrorists” by Egypt, ” Says it all. Turkey remains committed to jihad, the expansion of Islam by deception or force .