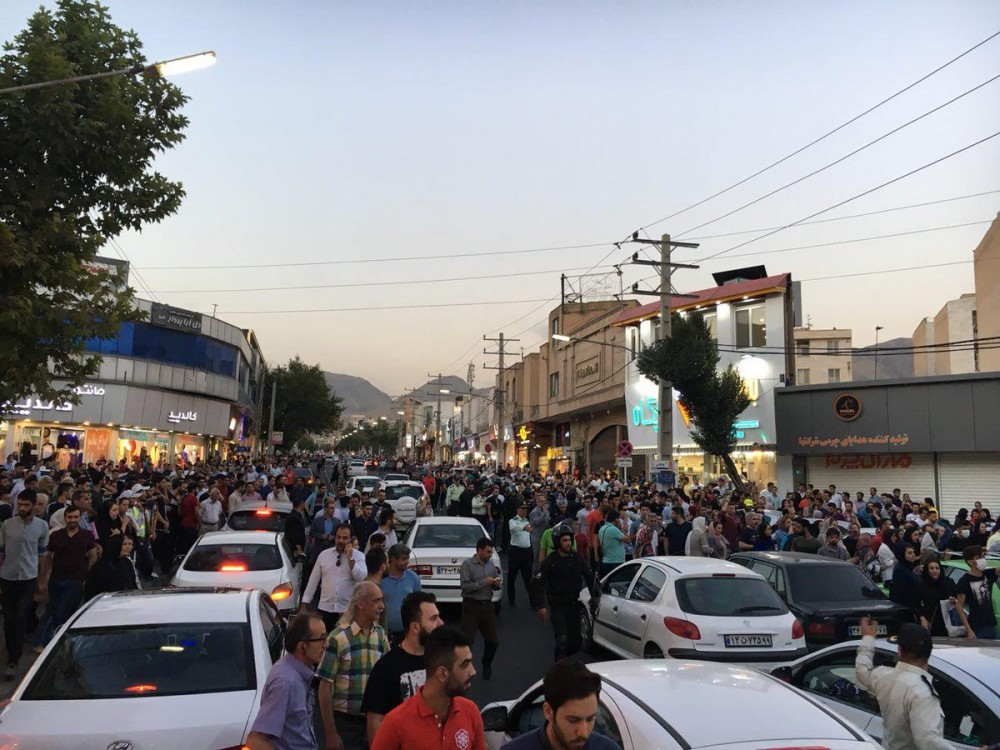 On August 2nd, Iranians went to the streets for the third day in a row to protest over the dramatic drop of the country’s currency and other economic problems ahead of the imposition of the renewed US sanctions on August 6, as reported by Iran’s state IRNA news agency.

CBN News reports that protesters chanted “death to the dictator” and “Khamenei, shame on you! Let go of your rule” as the people’s anger against Iran’s government and religious leaders.

Also reported by IRNA on July 31st and August 1st, approximately 200 people protested in the city of Karaj, west of Tehran. The news agency also cited police in saying that protesters attempted to damage public buildings, however they were unable to do so, not providing any further details regarding the matter.

According to VOA News, the protests spread to 10 major cities in what is the biggest challenge to Iran’s Islamist rulers since December 2017 – January 2018’s nationwide demonstrations. Images and reports sent by citizen journalists in Iran and verified by VOA Persian confirmed that street protests took place on August 2nd in the capital, Tehran, and nine other cities: Ahvaz, Hamedan, Isfahan, Karaj, Kermanshah, Mashhad, Shiraz, Urmia and Varamin. VOA also reports that the July 31st and August 1st protests were limited to Isfahan and Karaj.

Shop keepers, stall vendors, farmers and even truck drivers are demonstrating today in the Amir-Kabir industrial complex of Isfahan, central Iran, protesting against high prices as the value of Tehran’s currency, the rial, plummets. Iran also suffers from falling salaries set against an increased cost of living in addition to tower shortages and power outages. As reported by the Express, at least 40 percent of drinking water in urban areas is being compromised because of failing pipelines that have not had required maintenance over the past few years.

Supposedly the biggest reason for the protests is that on July 29th, Iran’s currency, the Rial, fell to a record low. It dropped past 100,000 rials to the US dollar, which is a historic low. This came just before US reimpose the first lot of sanctions on the Iranian economy on August 6th. The sanctions were reimposed on Iran by the US after Donald Trump’s withdrawal from the Iran Nuclear Deal on May 8th.

The sanctions that are to be imposed on August 6th, however are currently to be followed by another batch of sanctions that are due to come into force in November. The November US sanctions are targeting Iranian oil exports, which, as a result, are expected to decrease.

However, the Express cites Shahin Gobadi, a member of the Foreign Affairs Committee of the National Council of Resistance of Iran, who claims that the key factors in the poor economy are internal factors such as the government and affiliating mafia groups have the heaviest influence of all.

The rial lost about half of its value since April due to Iran’s vulnerable economy and the financial difficulties of local banks, on top of the heavy demand for dollars due to fear of the sanctions that are to be imposed on July 6th. This, in turn, led to an increase in export, specifically in the raw materials for plastic products sector in Iran. The increase in exports is leading to the bankruptcy of many producers who depend on the Iranian produced petrochemicals.

All of these stem from the withdrawal of the US from the Iran Nuclear Deal on May 8th and the following incoming sanctions. However, even before the withdrawal there were protests. Between December 27, 2017 and January 3rd, 2018 Iranians went to the streets protesting over the rising cost of living, the high unemployment and the alleged state corruption, as well as the, even at that moment, currency volatility. Furthermore, a month ago there was a three-day wave of protests that started on June 25th. The protests were caused by the collapsing of the rial, there were even clashes with the police outside the parliament in Tehran. Despite Iran’s Central Bank’s attempts to normalize the currency by limiting foreign currency transactions the rial continued falling to the historical low.

So what can the Iranian govt do about the value of the Rial?

Unfortunately, the one thing the U.S. is good at is destroying currencies. The Ruble was too big a target but they were able to destroy Venezuelan Bolivar. The problem is the snowball effect. Once a currency starts plummeting, no other country wants to use it to sell Iran anything because it will devalue immediately after the transaction causing demand for the Rial to fall even further. I suppose that if Iran can keep oil sales up, they could use Rupees, Yuan, and maybe Rubles for all foreign purchases.

Have you been in Chechen republic?

Well there is Ossetia.

Would you elaborate? Which Osetia? North or Southern? And what about them?

How about like Crimea then, with the autonomy of Chechnia? How would YOU save Iran, O pedantic one?? :)

Would you please elaborate what exactly you are talking about?

Lolz dude that is not the point! The idea is to be able to protect them from Kiev.

What goes around comes around. F.uk.us and friends have been shit canning other countries economies for a long time. When Karma strikes it’s gonna be painful.

One or two hundred people protesting in a country this size is a joke. Compare this to major protests in the US that get zero coverage in media.

I find it disgusting that South Front posts CIA created articles written by the CIA front terrorist groups like the National Council of Resistance of Iran. It’s akin to posting articles about Russia written by the Azov Battalion.

The real reason for these “protests” is that CIA has sleepers cells inside Iran who organize and mobilize small groups of people to lead only a few hundred people across varies cities spontaneously. Their hope is that the masses join in the fake color revolution and create chaos and instability. They already tried this tactic in January and failed. I expect South Front not to be a mouthpiece of the CIA and repeat their lies and please never again post anything written by or associated to the National Council of Resistance of Iran, which doesn’t even have 1% support inside Iran.

“The real reason for these “protests” is that CIA has sleepers cells inside Iran who organize and mobilize small groups of people across varies cities spontaneously.”

No doubt the CIA is loving the protests, but dissent is a normal, healthy part of any state. Attributing ALL dissent to the CIA presumes Iranians are too dumb or unsophisticated to have any issues with their government worth spontaneously protesting – ever.

Conditions in Iran are difficult – I know, because my country has gone out of our way to create those conditions for decades. Iranians get angry and want the government to do something. That is hardly the same as the U.S. Deep State’s (and crony’s) dream of “Iranian regime change through revolution, creating another powerless, corrupt U.S. vassal state”. I think we already tried that in Iran once before and that scheme eventually failed rather spectacularly.

I’m not just associating these to the CIA out of thin air. There was an intense media campaign by Persian language British and American media channels for the past few weeks trying to mobilize people for a nationwide protests this week. The result was no more than 2000-5000 size crowds max and it only occured in about 6 cities. Many of the slogans they were shouting was also clearly not natural. They were shouting for Iran to get out of Syria, Lebanon, and Iraq which has nothing to do with Iran’s economic circumstances.

You have no idea the intense level of propaganda being targetted at Iranian audiences 24/7 from all platforms, all media types, and through their agents and sleeper cells inside Iran. Their current plan is to pressure Iran economically and psychologically, then encourage them to come to the streets so the CIA sleeper cells can mislead the entire thing and try to turn it into a spark for a color revolution, and if big enough crowds show up they have terrorists ready to start assassinating people at random, exactly like they did in Ukraine. It’s the same playbook.

nice, maybe we can move in to help these people out and give them true freedom

I’m assuming sarcasm here, so I won’t bother to post that it worked so well each and every time in the past. ;-)

well we can do it better this time

Naturally. Because doing the same thing all over and hoping for a different outcome is always a benchmark of (in)sanity. ;-)

You try, that will be no fun. Too bad that you are not going to participate, you’ll be leading from behind.

He is key board beer swelling loudmouthed American coward, of course that chickenshit Vidura wouldn’t do that.

That pretty much describes most of the brain-dead SF commenters regardless of where they reside!

Go stuff your freedom shit up your ass Yankee.

This is pure propaganda organised by the Luciferian zionists just as planned.They create the problem and blame others,then propose the solution which is their goal,,Regime Change.But it won’t Happen.

So how much more expensive is a loaf of bread? Or a litre of gas? We know that the gold merchants have to be ‘priced out’ of casual saving, and new pair of Levis will hurt. .

VOA Persian confirmed. I feel reassured that whatever happened is not how they reported it.