The Czech Republic and Slovakia do not fear Brussels’ threats to impose economic sanctions against them. 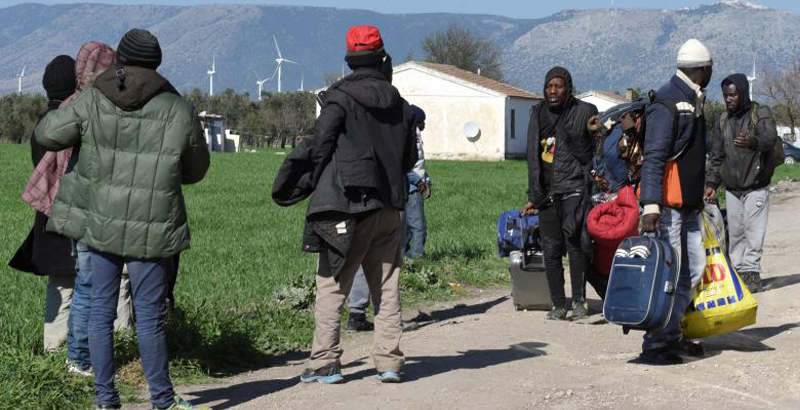 A few days ago, the European Commission urged EU states to accelerate acceptation of Middle Eastern and North African migrants from Italy and Greece in accordance with the quota system, adopted in the autumn of 2015. Brussels threatened that If EU members continue to neglect their duties, they will be expected to face economic sanctions. EU countries from Eastern Europe considered the system of forced resettlement of migrants ineffective solution of the migration crisis and are not going to make any concessions, the Izvestiya newspaper reported, citing the Foreign Ministries of Slovakia and the Czech Republic.

According to the newspaper, the countries of Eastern Europe will not change their position and will subsequently refuse to accept migrants in the amount, required by Brussels. They argue that this process should take place on a voluntary basis and take into account capabilities of each country. In this way, the Czech Republic has accepted only twelve refugees from 2,688 appointed people, while Slovakia has given asylum to only nine migrants so far. Hungary completely refused to accept refugees under the quota system and in 2015, brought an action before the EU court along with Slovakia in order to challenge the EU plan for compulsory quotas of migrants’ acceptation.

“Only 13,000 people have been successfully reallocated in EU countries since 2015. We support the idea of ​​‘flexible solidarity’, which is based on capabilities of each individual state. Slovakia has made a significant contribution to resolving the migration crisis, allocating €11 million for this, as well as providing 364 experts, who are involved in protecting of the EU external borders in those countries that are under strong pressure from migrants. Bratislava believes that the quota system does not work. Bratislava is not going to change its position and is awaiting the court’s decision, which should be made at the end of this year,” press secretary of the Slovak Foreign Ministry, Peter Stano, told Izvestiya.

The countries of Eastern Europe are concerned about the threat to their security due to the lack of reliable information about migrants, arriving from the territory of Greece and Italy. President of the Czech Republic Milos Zeman repeatedly said that persons, connected with terrorist organizations, are among migrants. In addition, the Eastern European states are not able to forcibly keep refugees, most of whom are seeking to enter Western Europe.

“Refugees do not pass proper verification in special centers for registration of migrants in Greece and Italy. In this way, the Czech Republic is not sure to whom it provides asylum. Public opinion polls indicate that the most part of Czech residents has a negative attitude towards migrants. Therefore, changes on the issue of refugees in the policy of the ruling parties on the eve of the autumn parliamentary elections should not be expected,” a source in the Czech Foreign Ministry told the newspaper.

Last week, European Commissioner for Migration, Home Affairs and Citizenship, Dimitris Avramopoulos, said that if until September 2017, EU members do not accept on their territory the number of migrants that was appointed by the so-called migrant quota system in the autumn of 2015, sanctions will be applied to them.

Previously, Vice President of the European Commission, Frans Timmermans, also said the threat of sanctions for countries, boycotting the migrant resettlement system. The both European officials refrained from specifying the punishment, but from their subsequent speeches it became clear that the countries-refuseniks are threatened by a noticeable cutback in funding by the EU. Earlier, Brussels announced an idea to fine EU members for €250,000 for each unaccepted migrant, but very soon this idea was abandoned.

The Czech Republic and Slovakia are not the only EU countries, which do not want to accommodate migrants on their territories. Last week, the European Commission admitted that in a year and a half, only 10% of 160,000 refugees were relocated from Greece and Italy to other countries of the bloc. At the same time, only Malta and Finland fully fulfilled their obligations under the migrant quotas’ scheme, while Hungary, Austria and Poland accepted no one refugee.

According to the law, in case of failure to comply with legal norms by a EU state, the European Commission can apply to the EU court, which has a right to impose economic sanctions against a country, which does not execute its obligations. However, it seems that this fact does not frighten EU members.

Any person who flees a wartorn country to a neighboring country is a refugee and should be helped at the first country they’re entering. Any person who then moves on to a more affluent country is no longer a refugee but a migrant looking for a better life. In which case different rules apply. Like apply for a visa, legal status, proof that they can support themselves, all the various things that prove that they can support themselves. And not sneak in uninvited using people smugglers. If certain West-European countries, cough Germany cough Sweden cough, still think they’re poor sad refugees they should man up and take them in, not force them on other countries who appear to have more sane policies. Even if they’re doing it for selfish reasons.

It’s a harsh policy, because under my definition unless war breaks out in Europe there can be no refugees in Europe, but for even half the money EU countries have to spend to absorb these illegal immigrants they could have made life very comfortable for all the Syrian refugees in Turkey, Lebanon and Jordan. Not to mention that for the billions that the US, France and the UK spent on arming the Jihadis in Syria to overthrow the Assad government, most of these refugees could have been helped as well. Not to mention that if these countries hadn’t poured all that money and weaponry to their headchopper friends the war would have been over and all the refugees could have gone home to begin with. In which case I nominate that all socalled refugees are kindly but firmly redirected to these countries to begin with.

And finally, as a Dutchman, I say that Frans Timmermans is a lying sack of shit who is full of himself, who was exactly that when he was still our foreign minister and hasn’t changed his ways at all after becoming an EU commissioner.

Those countries that started the conflict namely UK, US, France should take all refugees then maybe next time they won’t get involved in regime change, colour revolutions, proxy wars and especially sponsoring terrorists.

Nice one it is true let them deal with their consequences of war refugees.

europeans need to arm themselves with personal firearms. Right now euros can object but do nothing. europe has made an historical mistake failing to arms its citizens. from its own governments

If this truly holds, sell most your Euros and start buying dollars. Rubles and Swiss Franc’s too. I’m still surprised the Euro is stronger, but maybe our debt is an issue. If Wilders loses and Le Pen loses, destruction of Europe is assured. Interesting to see these stand offs with Brussels. About time. Now, if the Greeks could grow some balls and walk away, we really can watch some history in the making.

Greece cannot walk away without getting economically destroyed by the globalists. The big EU countries are the ones that will make or break Europe.

Because its an invasion and the jews opened the gates.Down with EU !

USA/Nato wars are finishing the population of the earth.I think we must start raping the refugees and immigrant to start a new generation call refumigrants.

Hang all the corupt EU-POLITICANS! They are traitors!