A controversial new monument has been erected in Dresden in honor of the victims of the battle for Aleppo. 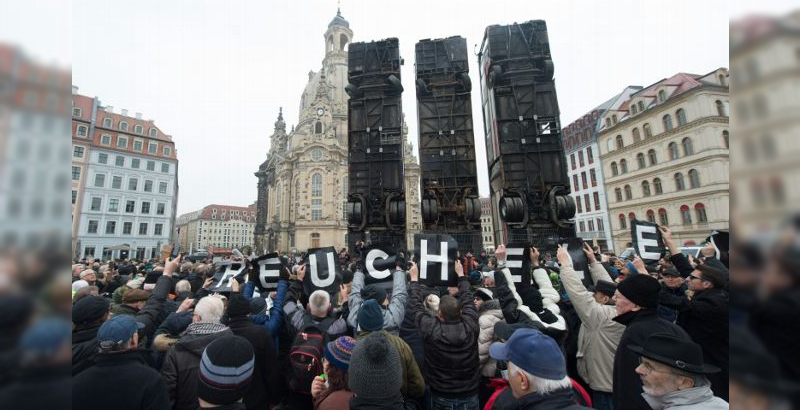 Syrian artist Manaf Halbouni has erected a controversial new monument in the central square of Dresden city, Germany. According to the artist, he tried to recreate a famous photo, taken by a Reuters’ photo-journalist during the battle for Aleppo in order to honor memory of the victims of the hostilities in the city. However, some people think that the monument may have been inspired by temporary fortifications, set up by radical Islamists, who killed Christians and was linked to the al-Qaeda terrorist group.

A photo, which inspired Halbouni, shows three buses, which were vertically set up on one of the streets of Aleppo city and used as a fortification against snipers of the Syrian Arab Army. According to anti-mass migration NGO Einprozent, the flag, which can be seen on the top of one of the buses, belongs to the Ahrar al-Sham group, allied with the al-Qaeda-backed al-Nusra Front.

Since that time, Ahrar al-Sham has changed its flag, however, the group still intends to depose Syrian President Bashar al-Assad and implement strict Sharia law in Syria. As the Amnesty International non-governmental organization reported, the group took part in tortures of religious minorities and political opponents, alongside with other terrorist groups, such as the Nour al-Din al-Zenki movement and Jabhat Fateh al-Sham (previously known as the al-Nusra Front). According to reports, Ahrar al-Sham also persecuted and killed Christians after the ‘liberation’ of Idlib city, located in the north-west of Syria, in March 2015.

The bus sculpture was protested by members of the anti-Islamisation PEGIDA movement, which is also based in Dresden. PEGIDA supporters booed Mayor of the city, Dirk Hilbert, who inaugurated the monument, and criticized the opening ceremony, as it took place just before the anniversary of the World War Two Dresden bombings.

Meanwhile, the creator of the sculpture told journalists that the monument symbolized “peace, freedom and humanity.”

“There is no other political message. It’s a peace memorial, a modern Statue of Liberty,” Halbouni said.

This is no art, it’s aesthetic terrorism.

lmao so this arab “artist” put 3 islamic cock symbols of terrorism in your city, stupid germans?

That is not art , that is a political statement against Syria and for Al Qaeda . The mayor should be charged with treason .

It is difficult to believe that the “artist” did not know that Ahrar al-Sham fighters erected that monster in Aleppo. And if really did not know about it, then also shame on him for not seeking more information before starting his action. So, in Dresden a monument was erected for an islamistic militia. Very nice.

The “artist” is one of them – “Manaf Halbouni from Syria”. Shame on Dirk Hilbert (the major) he is a dirkhead.

One must wonder whether Europeans are mostly feeble minded, or whether their hatred is so strong that it makes them do the most idiotic things… Are brain transplants in order or will genetic engineering be enough?…

After 1945 Germans were systematically suppressed both militarily and culturally by Cold War powers, it was easy to do, with combination of victor’s justice and the haunting legacy of Nazi regime’s appalling behavior and violence across eastern Europe. Since reunification, Germans remain under US military and cultural control and don’t stray very far from US compliance. But the Germans have absorbed all of that cultural self doubt over couple of generations and now rigorously censor/ police themselves – any sense of self identity and independence are quickly shut down by the country’s political class as signs of fascist reawakening and the majority usually quietly concur.

Soviet Union didn’t suppress german identity, it was even prohibited for media. There is a famous phrase by Joseph Stalin: “Historical experience shows us that Hitlers come and go, but the german people, the german nation prevail.”

Ah modern Islamic art – they only need to convert that cathedral into a mosque and all those muslim rapefugees will feel like home.