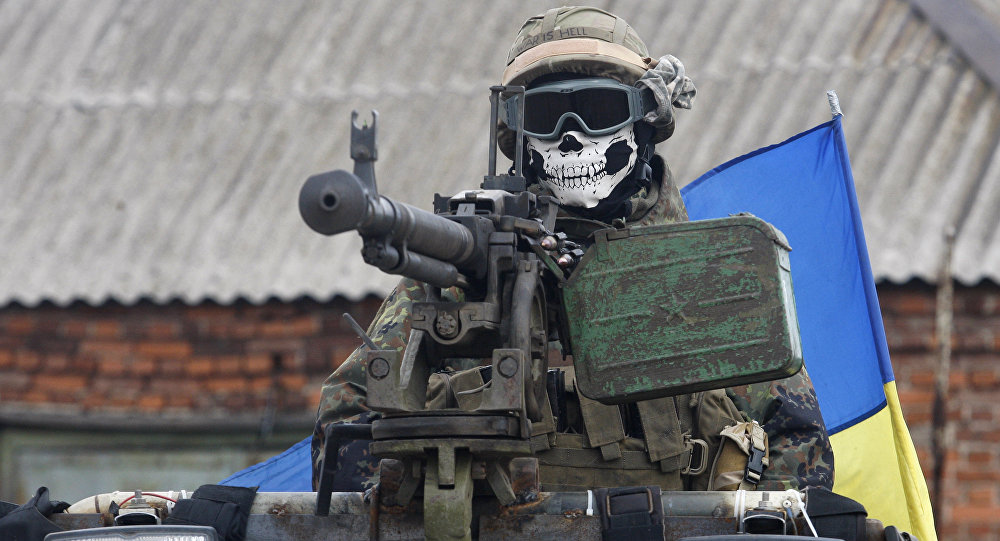 The UN has released a report (link) covering a dramatic deteoration of the situation in the conflict zone in eastern Ukraine as well as a pure human rights situation and a systematic use of torture practices in Ukraine.

“The report covers the period from 16 February to 15 May 2017, during which the UN Human Rights Monitoring Mission in Ukraine (HRMMU) recorded 36 conflict-related civilian deaths and 157 injuries – a 48 per cent increase on the previous reporting period from 16 November 2016 to 15 February 2017. There were daily ceasefire violations and routine use of small arms and light and heavy weapons in the conflict zone. Such attacks and the resulting damage to critical infrastructure, including schools, hospitals and water facilities, raise serious concerns for the protection of civilians, the report notes. The report warns that, as summer approaches, there is a risk of further escalation in hostilities, as in previous years.”

Yesterday, the Information and Press Department of the Russian Foreign Ministry released a comment emphasizing facts of constant violations of the Minsk agreements by the Kiev government side. The Ukrainian authorities implements a policy aimed at desturction of a part of the Ukrainian citizens. People living in the conflcit zone as well as in other parts of the country are a target of this policy.

SouthFront provides a full text of the comment released by the Russian Foreign Ministry (link):

We have familiarised ourselves with the eighteenth report produced by the UN Human Rights Monitoring Mission in Ukraine for the period from February 16 to May 15, 2017.

We are deeply concerned over a dramatic surge in tension in Donbass resulting in a 48 per cent rise in the number of civilian casualties during the period under review: 36 persons died and 157 were wounded. We support the Monitoring Mission’s call to strictly abide by the ceasefire agreement, addressed to the parties of the conflict. We share the concern made by the members of the mission over the unending shelling of civilian infrastructure facilities, in particular water supply and power supply systems, schools and hospitals, which is contrary to Kiev’s international commitments to protect civilians.  In this connection, we again entirely support the Monitoring Mission’s recommendations on the need for scrupulous compliance with the Minsk Agreements.

We are extremely troubled with the mission’s data on the new cases of illegal or arbitrary deprivation of liberty, enforced disappearances, and the Security Service of Ukraine’s systematic use of torture to obtain confession evidence from detainees suspected of involvement in the Donbass conflict. We agree with the UN that the lack of due investigation of the said crimes by the Ukrainian authorities is conducive to the expansion of lawlessness in the country as a whole.

We share the Monitoring Mission’s anxiety in connection with official Kiev’s inhuman and discriminatory efforts to maintain the socioeconomic blockade of Donbass. Introduced in 2016, the so-called verification procedures have deprived over 400,000 Ukrainians of their legal pensions, while the new rules regulating the crossing of the line of contact not only lead to a considerable restriction of the freedom of movement in Ukraine and further separation of families but also expose more than 900,000 people a month to the real mortal danger as they cross the internal border. The bans imposed by the Ukrainian government on the transfer of cargoes across the line of contact are totally irrational and lead not just to the closure of businesses but also to the loss of sources of income and means of livelihood for thousands of people.

The UN Mission’s alarming conclusions about the lack of improvement in the Ukrainian judiciary system or progress in the investigation of the May 2014 Odessa tragedy command attention as well.

We expect the Monitoring Mission to work on efforts to prevent restrictions concerning freedom of expression and pressure on the media in Ukraine and we urge Kiev to create safe working conditions for journalists.

At the same time, we must note that a portion of the report is politically motivated. An attempt is made in a number of its sections to exculpate the Kiev authorities and gloss over the crimes they commit against their own people. Also we would like to remind those concerned that the Republic of Crimea is territory belonging to the Russian Federation  as well as the federal city of Sevastopol and that the attempt to include in the UN report on Ukraine an assessment of the human rights situation in this Russian region is illegal.

in long term the insurgents will lose their war. they are alone.

Nope, not gonna happen. Russia isn’t going to allow a pro-US Nazi-iniltrated putsch regime to crush ethnic Russian-speakers in Donbass. They will give the Novo forces whetever they need to defend themselves, and any mass attack by Ukropi forces will incur a Russian response.

To justify such a response, Russia simply needs to invoke R2P or Responsibility to Protect. If its good enough for NATO to attack Serbia so that they could steal Kosovo and give it to an organised-crime militia group, then its good enough to allow Russia to help Donbass defend itself against unrelenting aggression from near-genocidal Ukie ultra-nationalist warmongers.

Nope, not gonna happen. Russia isn’t going to allow a pro-US Nazi-iniltrated putsch regime to crush ethnic Russian-speakers in Donbass. They will give the Novo forces whetever they need to defend themselves, and any mass attack by Ukropi forces will incur a Russian response.

this is exactly, why will lose. nobody want to live long time at war. the economy is practically zero there. the poeple will give up, if will be not normalised the life. they do not wont be a frontline of moscow (or else). you can see, that in ther regionof ukraine, where the russians are in majority is no support of such idea. again, they are alone an will give up.

“the economy is practically zero there. the poeple will give up”

The economy isn’t great there that’s true but it’s better than in Ukraine. The wages are similar but utility bills are much higher in Ukraine.

There is no military solution for this conflict, Ukraine will have to cave in at some point and fulfill the Minsk agreement. In 2019 Gazprom will simply override Ukraine and Naftogaz is contributing 10% in GDP of Ukraine.

Things aren’t much better in Ukraine where there isn’t any war. Just an ATO for the ‘bums’ waiting to get their ‘russian estate’ and the poor saps drafted to go get shot at. And, of course, the ‘Nazis’ who will have their ‘putsch’ one way or the other.

Insurgent definition, a person who rises in forcible opposition to lawful authority. So you think that the color revolution illegal coup group will lose their war? You are not clear here………

no, the color revolution was not legal, but the election later already yes.

Crimea and the South East of the country was not allowed to vote or rather voted by secession. It was these regions that elected the legal constitutional goverment and President that was over thrown.

This may not be a subject you are up to speed on. If you think that the current regime in Kiev is anything other than a gang of crooks (oligarchs) that the protest was all about throwing out. That movement was shanghaied by Neo Nazis hired/funded and controlled by the oligarchs.

as i know, they boykotted. allowed was. but also if you give the same results like previously, the new thifs would win.

until charkov will not rise, no chance for win. they end like tamils or north irians.

So did the Crimea referendum, legal expression of will of the people, isn’t it?

Reichskommissariat Ukraine is a democratic power proud of 14th Waffen Grenadier Division of the SS. Nazi grandsons celebrating anniversaries and continuing with killings. And losing again. Some say that insanity is doing the same thing over and over again and expecting different results.

Grandson of Goebbels, you write nonsense.

Goebbels didn’t speak, or write, Ukrainian – nobody sensible did.

I don’t think the curent version of Ukraine is either democratic, or a power. It’s still the ‘governate’ it always has een.

Oriented, as it claims to be toward ‘ restoring the territorial integrity’ of Eulkraine, the Kyiv forces has demonstrated more than a willinesss to taking the dissident ‘half’ of the 15 Km Minsk agreement buffer zone, in a number of locations. This not only provides the UA fighters with a much-needed sense of ‘victory’, it provides a few more martyrs to grieve about in the world press and gives an opportunity for security forces to ‘build’ democrazy by ’rounding-up traitors’ and potential ‘threats’ – or to scope out future property ‘annexations’. It is, still, all about ethnic cleansing.