The murder of Givi (Mikhail Tolstykh), the commander of the Somali battalion, has showed that the Donetsk People’s Republic (DPR) needs a new system of internal security. 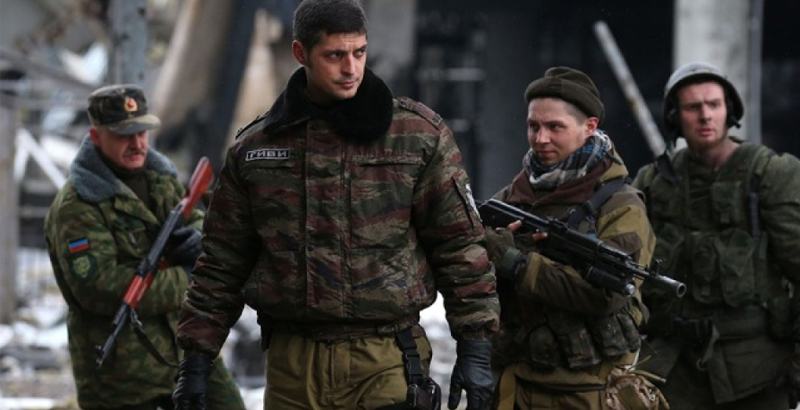 Commander of the Somali battalion of the Donetsk People’s Republic Mikhail Tolstykh, also known as Givi, and members of the DPR People’s Militia (Photo: ntv.ru)

On Wednesday, the authorities of the Donetsk People’s Republic (DPR) presented a plan of normalization of the situation along the contact line in the Donbass, which was previously agreed with the Organization for Security and Co-operation in Europe (OSCE), the Vzglyad newspaper reported. It’s a good plan, but it is already clear that Kiev will reject it. So, the main priority of Donetsk should be a new system of internal security, as due to a series of its shortcomings, the murder of Givi (Mikhail Tolstykh) became possible.

The plan of normalization of the situation along the contact line in the Donbass consists of five paragraphs, including an “immediate and comprehensive” cease-fire, withdrawal of all prohibited weapons, and providing an unimpeded access for representatives of the OSCE Special Monitoring Mission (SMM).

The DPR also offers to establish a zone without arms and any military units within a radius of one kilometer from the Donetsk filter station. As it was noted, it is necessary for reconstruction the infrastructure, as well as for normalization of the life of civilians in the area of Yasinovataya and Avdeyevka, who turned out to be in the middle of the next military crisis. The last paragraph prohibits any offensive operations and rapprochement of the sides.

As the DPR Command noted, “all the proposals were documented and handed over to the Ukrainian Command, which has completely ignored the initiative of the republic.” Reportedly, first deputy head of the OSCE SMM Alexander Hug refused to act as a mediator in the negotiation process and left the territory of the region.

Meanwhile, the Ukrainian Armed Forces continue to build up forces on its positions from Mariupol to Avdeyevka. Offensive instruments of war arrive to the front line: pontoon bridges were sent to Luhansk village, there also are data on mining of the Avdeyevka coke chemistry factory, undermining of which can lead to the effect of a blown up chemical bomb.

But the main news is the death of Givi, a commander of the Somali battalion, who was killed with a shot from the Shmel flamer. As Vzglyad noted, a large sabotage group, which kept him under surveillance for some time, certainly was involved in this murder. The shot was made by a high-class professional – it is very difficult to hit a window from 200 meters.

The announced ‘amber alert’ did not give any results. Such saboteurs and suicide bombers usually pre-plan their lines of retreat. In Donetsk they have a carefree life, despite the bloody war in the region. There are no checkpoints and patrols of law enforcements in the city, regular checks of transport are not conducted, nobody will ask a suspicious person to show his documents. A curfew, the only thing that remained of ‘enhanced security measures’, causes discontent of local residents. But only at nights, random cars that violate this curfew are checked somehow.

As the newspaper noted, the Givi’s death is a serious blow to the image of the DPR. Of course, his battalion will not disintegrate, as the Sparta did not stop to exist after the death of Arseniy Pavlov, also known as Motorola. The front will not be ruined and the configuration of the DPR army will not be changed. However, Givi was a representative of the generation of young people, who stood out in the most difficult times of the war and then managed to find strength to accept the new rules of the game.

The main questions about the murder of the commander of the Somali battalion should be addressed to the DPR Ministry for State Security and other structures that are supposed to provide protection for the most important people of the republic. Despite ‘trainings’, provided by Russian instructors, and previous experience of many Donetsk’s bodyguards, gotten in Ukrainian security services, the protection of the first persons in the DPR is not enough good. For example, Givi did not have permanent residence in Donetsk, he had not a family, so, he had no permanent route of movement. He could be ‘hooked’ only in the battalion’s headquarters, a building of which was equipped with many cameras and was guarded by fighters. However, the shot from the Shmel flamer from a distance of 200 meters turned to be successful solution.

Certainly, the sabotage group included local natives, whose motives can be very various. General Eduard Basurin was right, when he said that the security should be radically restructured, but not strengthened.

This article says it all- https://topwar.ru/108831-teper-i-givi.html Google translate will work wonders for non-russian speakers.

As I had warned about and freely written on this site in October, that MI6 had a working plan where SAS were going to be eliminating several DPR leaders from February-May and then were planning to overwhelm the defenses of the DPR in a fast assault to bring this region under the Jewish dictator Poroshenko of the Ukraine. https://www.rt.com/op-edge/376587-us-ukraine-relations-poroshenko/ Trump was the only wild-card that MI6 was worried about ruining their plans. SAS will take their time as they murder more humans, and as we all know, Trump is an enemy of MI6 and SAS. http://www.dailystormer.com/

What would a nazi-brain know about MI6?

Truth outweighs your hate. The word “Nazi” is a reference to “Ashkenazi’s” they are an ethnic group of Jews. Nazi is a short word for Jews. Also, I am an anti-Nazi. https://www.youtube.com/watch?v=GHXQFt4dySY

You are kidding me! The Nazi’s were Jews. Only the dumbest dumb f**k Nazi would believe that twisted s**t. Seriously – Givi would have shot you to as a favour.