The head of the Donetsk People’s Republic visited the Donetsk Higher Military Command School in Donetsk for the flag handover ceremony. 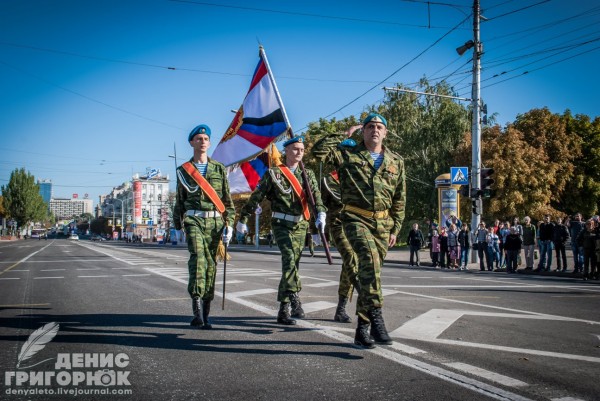 Originally appeared at Regnum, translated by Sokol exclusively for SouthFront

A formal war banner ceremony took place in the Donetsk Higher Military Command School (Donetsk). A REGNUM IA correspondent was informed of this on 14 September by the press service of the DPR.

The head of DPR Alexander Zakharchenko while addressing the students, said that they will be actively taking part in the hostilities.

”Today is a very significant day. Today our state is born. Here on this parade ground, the parade ground where stand our future officers, our future offices who will eventually led our armed forced in battle, is where our state is born. A state without an army – is not a state, its a puppet. It is imperative we build the armed forces that will resolve all conflicts. I would like to thank you, the students, because you are the first officers. You, have made history. You were the first to come to this school, and you will be the first to command our units” – said Zarachenko

Head of DPR, Zakharchenko, also announced that DonVOKU (ДонВОКУ) will be an active military part of the Armed Forces of the Donetsk People’s Republic while handing over the new battle flag to Mikhail Tikhonov, the head of the Donetsk Higher Military Command School.

“Special thanks to your parents and relatives, because they have raised heroes. And you should be proud that you are their children. I wish you, guys, all the very best ! The path ahead of you might be difficult, but I am sure you will pass all tests with flying colors!! “- said Zakharchenko.