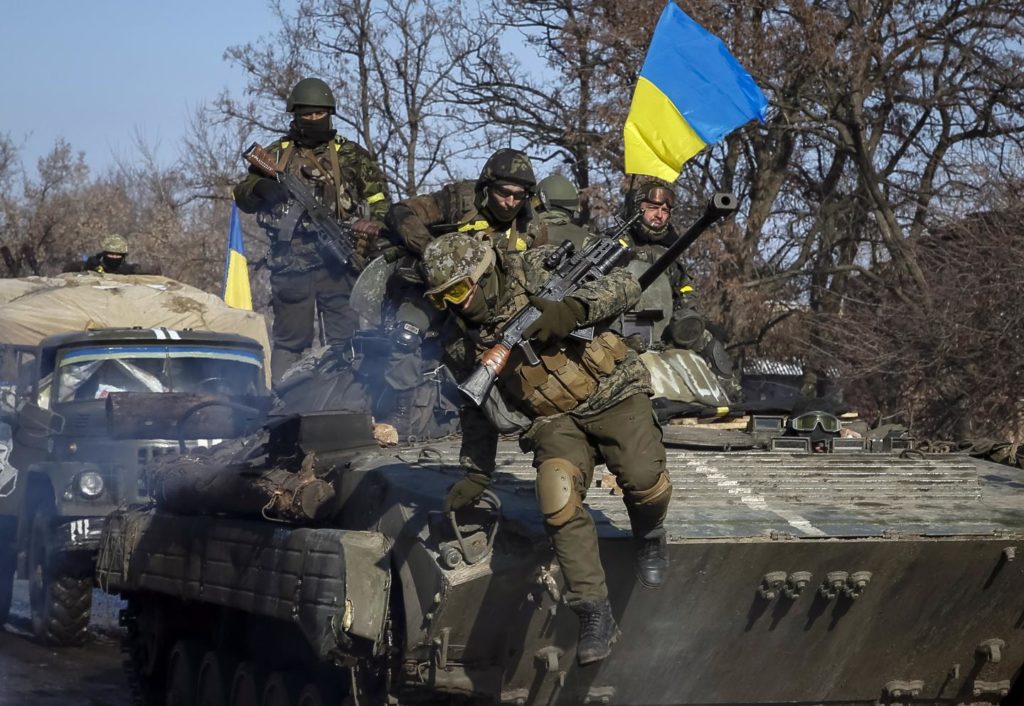 Ukrainian military commanders have started executing by shooting their own troops, who refuse to fight in the region of Donbass, Head of the Press Service of the Donetsk People’s Republic (DPR) Danil Bezsonov stated on December 10.

According to Bezsonov, one of the incidents took place on positions of the 1st Mountain Assault Battalion of the 128th brigade in the area of Bogdanvla. The DPR officail said that a soldier, A. Kolomiec (year of birth – 1989), was shot and killed as a result of the conflict with his commander. Kolomiec was against participation of this unit in a new stage of the ongoing conflict in eastern Ukraine.

Quoting the DPR intelligence, Bezsonov also saida that a similar situation took place in Berdyansk, Zaporojie region, where another soldier was shot and killed by his commander during a propaganda campaign in support of military actions in the region of Donbass. The death of this soldier was described as a suicide.

Zio-Nazi is more accurate I think :)

Complete wank-stain is good for me.

PS Who is this “spit” nutter ?, by the way; he always seems off his head.

Well there are 3 crews of trolls around here lately.

Some are from south carolina( trojson crawfish) notice they werent here monday, big snowstorm down there no power.

Another crew is brits, i suspect spit is with that lot.

There is another “crew” in eastern europe somewhere.

There is another crew out there too, pretty easy to see where there from i wont go there.

Whilst I understand your statement, the trouble is, it is the decent people who don’t want to kill their fellow nationals who are being shot and not those that see anyone different to them as animals for the slaughter. What we really want is for those soldiers who disagree with the “ATO” to defect, not get shot. Shoot the ukranazis.

You can call me Al
Reply to  Thraxite

Just to add to that, there is a fair chance this lad was conscripted. At the beginning of the troubles, thousands ran and emigrated to Russia to avoid conscription, now, many just vanish, I would assume to Donbass or even Russia.

It is things like this that will break the bake of The Ukraine for decades to come.

I doubt that their families will suffer shame as they did, when this happened in WW I & II; which strangely enough will be a grace of God.

PS The people will rise up soon in my view.

Don’t follow such leaders to the grave, instead follow the anointed son of the creator of Heaven and Earth to salvation. Obey him and the laws he said weren’t overthrown in Mat 5:17-19. Worship who he said in Mat 4:10. Our creator always takes care of his people, make sure you’re one.

if the god existed, the Nazi shit ,sionists,faschist,US,British etc warmongers would die at birth!

God is love thats why we have free will. Some people choose evil others righteousness. But we are not to Judge only God will judge, even those who judge other will be judged by Jesus Christ.

Look at the pain and horror in the world, if God exists he’s one sick dude.

Mate, how are we to explain the pain and horror Jesus went thru nailed to a cross. God experienced pain and suffering first hand on that cross. He did this to give people who turn their hearts to Him a second chance.

Struth Ma-a-a-t-e, Who exactly is causing the pain and horror you see in the world… Sick people who disobey God. ” Love your enemy” was what we are meant to live by.

I used to be a Nazi. But then I realized that Nazi means something other than the survival of the white Race. The world is not different between us. I learned to change myself. I dont want You to change. this world is just an illusion. If an ex racist can change so can all of You can. This is a world just looking to Change You. Please dont.

You can call me Al
Reply to  antifa

Why, we each have our choice to our destiny, it is not for God to choose the path; we must do that ourselves.

Then people like you would say…” Look God is killing beautiful innocent babies”. Those who do not love God will always find something to criticize Him for. (John 3:16) For God so loved the world, that he gave his only begotten Son, that whosoever believeth in him should not perish, but have everlasting life.

Antifa, Jesus Christ died to save sinners. Like you and me

Will he stop the bullets and feed us our daily bread?

You’re on the right track there.

Zionist. We must be billion of Jews all over the world being in everything, or You are to many menthal hospitals for that.

It must be like that since that few can defeat that many of You. But of course You also insist in being kept stupid and women even lower then that.

Zionist, Nazi it’s the same thing. Not all Jews are Nazis/Zionists, but from your post I gather you are?

Replace it with imperialist. There grammar problem solved.

There are many imperialists all over the world. These same imperialists control the money supply and the media.

There may not be a billion imperialists but they have money to buy a billion mercs if they want to.

There is a reason for constant Jew bashing. A “Jew” is defined as somebody who has relation the religion of Judaism. They’ve succeeded to omit its criminality when presenting their Hollerco$t to us and their Hitler lies, so we believed them. Until know, because we have videoevidence of the things “nazis” were telling us whom we hated and didn’t belive. See rabbi teach Jews how to lie to the Goyim: https://www.youtube.com/watch?v=jZVzItQ0MtE&t=0s&index=3&list=PLyEGpienRGwI7lQ50eOD4BOcD3FvgORfl

Will not obfuscate to leave a follower of the criminal religion alone. Perhaps you also fell for the idea that they are a people a race and those who complain are therefore racists? Well investigate this: https://www.theguardian.com/world/2002/aug/07/israel1

Shalom Shlomo, what is more fun for you, sniping Palestinian children, or throwing white phosporus on them? Shalom shalom.

Yes they love to fight to the last Goyim.

Wow! Talk about marking an X on your own back. Winning.

Another example – FSB received a claim fron DNR that one of ukro SBU agents detained from those mil vessels in Kerch straight is the same person who tortured him in Donbass. Justice starts to catch to ukro nazi. Slowly but surely. Each of them will have to pay – ask Bismark :)

Bismark? Im intrigued, I dont know much of the interwar period. Or is this something from earlier?

Please point me in the riggt direction

This is an easy remedy. If a troop is that committed to not fight and he’s going to die for it, shoot your commanding officer.

Ahhh ! Vigilante justice. Usually during the most severe of circumstances. We non-muslims in USA & Europe at at that point now.

Old school ‘fragging’ proved far better option for US conscripts in Vietnam – has in-built plausible deniability – toss fragmentation grenade behind a problematic immediate superior officer in the field, the sort whose own personal ambitions or sheer incompetence will get own infantryman killed.

Yes when ordered to commit a war crime, if you can out in the field so you can say it was an enemy sniper. You mean commanding officers not officer.

In Vietnam it was called “fragging” – very popular amongst the recruits.

Time to mutiny, shoot the officers, and post their heads to Washington.

Now I say the same thing as I would say in the skripal case, or the Douma fake chemical attacks, the claim has been made, where is the evidence to back it up? As they say on the internet, pics or get the fuck out!