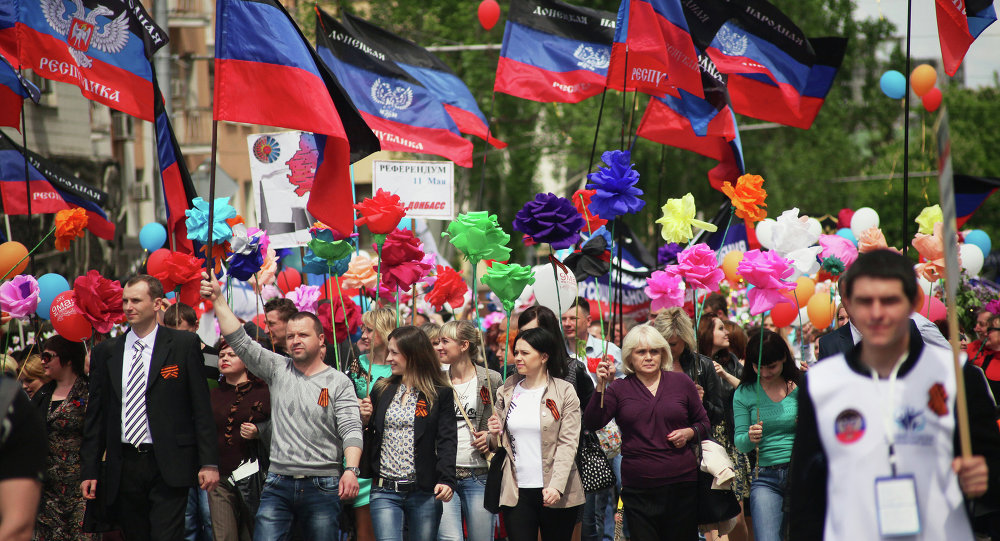 On Tuesday, the Donetsk People’s Republic (DPR) declared the establishment of the state of Malorossiya. The DPR leadership describes it as a successor state to Ukraine.

Zakharchenko said that Ukraine is a failed state and called the international community to support the initiative.

“We, the representatives of former Ukraine, declare the establishment of a new state, Malorossiya, which is a successor state to Ukraine. We agree that the new state’s name will be Malorossiya because the very name of Ukraine has discredited itself. The city of Donetsk becomes Malorossiya’s capital,” DPR Income Minister Alexander Timofeev said reading a constitution act on the formation of the new country.

Malorossiya’s constitution will be approved following a referendum and will state its non-aligned status and policy toward restoring ties with Russia.

“The policy aimed at joining the Union State of Russia and Belarus while preserving independence and sovereignty. The keeping of a visa-free regime in agreement with the European Union. De-oligarchisation, uncluding on a legal basis,” Timofeev declared.

The declaration of the new state is another sign that the so-called Minsk agreements are collapsing and cannot solve the political, social and military tensions in eastern Ukraine.

Good idea ! Congratulations. We will see how the ukronazis and the west will react to this step.

you can see juncker reaching for the bottle, while soros his unzipping his fly, if you catch my drift…lol

Open the borders and allow free movement of Ukrainians to Poland and the Western Ukraine and see how long ‘Little Russia’ lasts.

Clue – Syrian refugee’s and migrants are not fighting to get into Russia. . .

Malorossiya’s constitution will be approved following a referendum and will state its non-aligned status and policy toward restoring ties with Russia.

Malo means “small” in Russian , it does not mean bad. First step towards reintegration with ancestral motherland.

The name comes from Greek because this area of Russia along the Black Sea had a large Greek population. In Greek “melon” means “white fruit” or more commonly “apple” which happens to be “malus” in Latin. The Greek prefix malo also means white so Malorossiya means White Russia in southern dialect. The same name (all in Slavic using belo- for white) is used for Belarus where the Russian dialect is almost the same as Ukrainian.

Anyone who thinks Russia, with or without Ukraine, is a territory of Russian speaking people is just plain ignorant and should spend some time learning the history and ethnography of these lands. Today’s “Russian” ethnic group is an aggregate of many aboriginal peoples and all of those ethnoses contributed to the Russian ethnos. The “Han” Chinese are a similar group in that they are an aggregate of many aboriginal groups of their territory.

You could say that we are witnessing the fall of colonial powers and the rise of aboriginals as a global power bloc.

Yeah malus means Bad in the Fucking Parasite languages, fabricated to stupidify even more idiots into the imaginarie “Good” Governmented Lands, that where stolen from the former inhabitants and indiginous humans who lived there. Maby next time you should better catch the drift who is speaking WHAT language the infiriour idiot languages of europe or the Most Complex and OLDEST “Tongue” on this planet that the people of there ANCESTORS still speak today.

Russian , according to linguists , is the closest language to ancient Sanskrit , which by they way , is considered to be the most scientific language ever created . Maybe that is why Russians do so well at science !

Ancient Greek and Latin are rooted from Sanskrit. Ancient Mesopotamia – pre Dynastic Egypt were seaport trade and overland trade routes With Indus culture. Ancient Hurrian culture which was Part of present day Turkey and Syria,was same Era as Akkad and Sumer. Hurrian culture had Indus culture signature within it via archeological finds. Culture exchange/influence was present with migration of regional powers. As Naqada period pre Dynastic Egypt was strongly imprinted by Mesopotamia and Levant . The earliest King burials at Abydos Egypt were Sumerian Royal where the Kings servants Get ended to join him….even animals. Mainstream History side is resisting evidence of ancient Rune script existing as far back as 9000bc.. Vinca culture /Caspian sea at 5500 BC used a script similar to Rune script. Gobekli Tepe of 9000 bc via the ring site stellar pillars suggests a language existed To organize that. Rune script existing to this day may be the longest active language. Lol….Rune script Rock…..= Multi pass card from the Bruce Willis/5TH Element Movie : )

Lithuanian is closer to Sanskrit. . .. .

cyrillic alphabet is part of the greek alphabet….hence the reason us greeks we can easily read it as for its origins that comes with out discussion to the ones are educated so what ever claims about russian Language go hand in hand with the greek and orhtodox religion ++

malinki in Russia means small hence the word malo….learn another language apart from english our mother language…it will help you development in general……!

mal+function = malfunction mal+russia= malorossiya, I hope russia will be tolerant of her colonies when they do the same.

Malo, to a Russian-speaker means ‘small’. Malorossia – ‘Little or Lesser Russia’ as opposed to the larger area of ‘Novorossia’ or New Russia’

You must be talking about the Federated States of Russia? There are no Russian ‘colonies’.

The states of the Russian Federation are independent,. Federation of the regional parts of Ukraine might have avoided their present difficulty. Centralized rule from Kyiv is an old ‘soviet’ notion they should have changed long ago and that has never sat easily on many regions of Ukraine.

What a wonderful opportunity for the forces of freedumb to ‘saddle the panzers’ for another NATO-trained kick at the ‘russian’ cat. Slava EUkrainie!!

Is it because of the size of their sexual organs??

Ukrokikes blown the fuck out!

I think DPR/LPR should first recover the territory and establish Novorossyia as a state from Kharkov to Odessa before pretending to conquer and rename the entire Russian “Borderland” (Ruthenia, Galicia and Transcarpathia included!) This move can only infuriate the banderites.

But maybe it’s the intention, to push the fake nazis to a military step that would end with its quick and complete destruction, who knows?

Kolomoisky (Jew who funded NAZI right wing militants) and Porashenko (Jew who leads a Nazi political party) Will be very saddened about the news coming from Syria and East Ukraine! George Soros (another Jew) will also be very saddened! Its a Jewish crying fest! And I fucking love Jewish tears! (Oh its ok to speak out against ISIS but not the scum Jews who fund and support them) Jews are racist!

‘Little Russia’ – exactly – not the Ukraine.