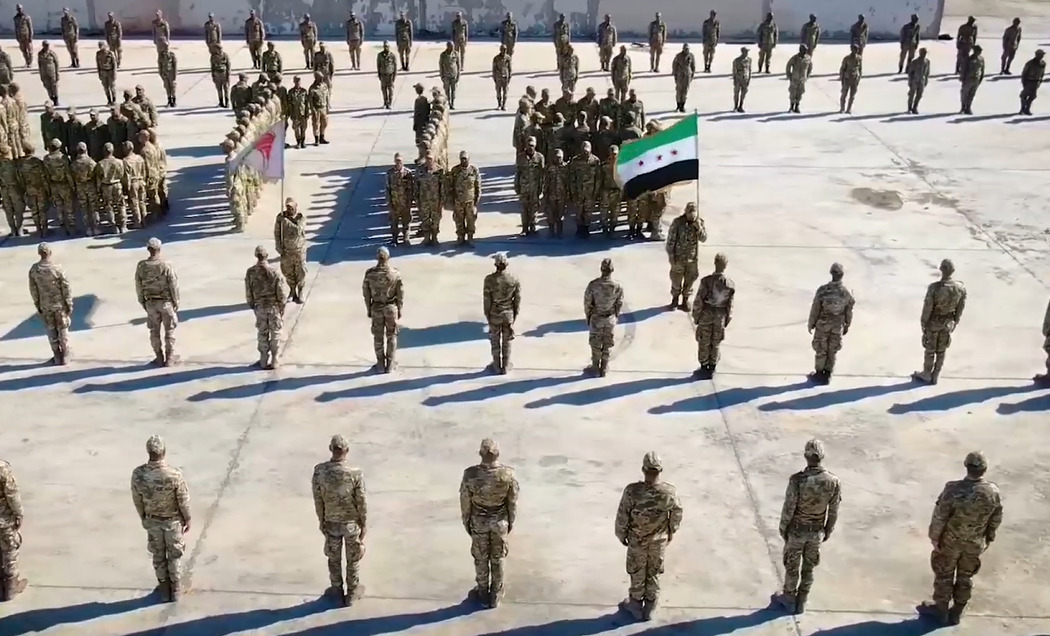 Illustrative image. Syrian mercenaries in one of their camps in Libya.

Dozens of Turkish-backed Syrian mercenaries had returned from Libya for the first time in ten weeks, the Syrian Observatory for Human Rights reported on June 7.

A Source informed on the matter told the SOHR that the return of the mercenaries did not represent the beginning of a full withdrawal from Libya. According to the source, Turkey is just rotating the mercenaries deployed there. Around 100 militants were sent to Libya very recently.

Turkey deployed thousands of Syrian militants in Libya between 2019 and 2020 in order to support its allies in the now-defunct Government of National Accord. More than 6,000 mercenaries are still in the war-torn country.

Last month, the SOHR revealed that Turkish-backed Syrian mercenaries in Libya were faking illness in order to return to their country.

Despite the recent progress in the intra-Libyan political process, Turkey is yet to withdraw its troops and proxies from the country. Efforts made by both the US and Egypt to resolve this issue are yet to bear any fruit. Ankara appears to be determined to stay in Libya for the long term.

These terrorists are not Syrian. They care very little about Syria and its people. They recognise no country called Syria. These terrorists fight for the dollar and for a erdogan pass to live in Turkey when they are evicted from Idlib. There they can live out the remainder of their recurring troubled and violent lives.

They have no saving graces. They are merely tools for warmongers.

The Objective
Reply to  Peter Jennings

I’ll tell you one thing guy, Assad will NEVER win the Syrian war with or without Russian backing. The likeliest scenario is a permanently fragmented Syria for the next decade at least. And as more weapons systems enter service with the Turkish military, Erdogan would even be more determined to defend Idlib and other Syrian regions. I guess you Rusky dogs are hopping for a successful coup against Erdogan or at least praying that he should lose election, so that the Turkish traitors will withdraw forces from Libya, Syria, and end support for N-K. But I tell you what, you can kiss any such a dream goodbye. Erdogan is a great leader that’s giving both the Russian and U.S bullies a hard time – and that’s what makes him great. Turkey will have more economic leverage with the completion of canal Istanbul. Chinese investors are lining up due to Turkey’s extensive logistical nodes, the canal, and highly tempting government incentives that is certain to project the Turkish economy to new heights. A decade from now, it’ll be near impossible to wage a currency or economic war against Turkey without the aggressor paying a heavy price economically, whether Europe, America, Russia or even China. And this is due to Turkey’s strategic location as a bridge between several continents. Erdogan said to the opposition: We’ll build the canal whether you like it or not. And note: when Turkey’s military power reaches its full potential (including new fighter jets, long-range missiles, anti-aircraft systems, battleships, submarines, and all the tanks we need) the Bosphorus strait will come fully under control of the Turkish government and any country using it will obey new rules. At such times, Russia or Europe will not even dream of militarily opening the Bosphorus, because it’d be pure suicidal mission that is bound to fail and result in serious human and material losses for the agressor.

Last edited 1 year ago by The Objective
2
Reply

Woof woof. Your currency is toast and China have more than one road with which to trade. Without ‘Rusky Dogs’ your tourist industry would also be toast. Erdogan has been hanging around with nato warmongers too long. Warmongering is a crime as designated during the Nuremburg trials. He thinks he can compete. The Turkish admin will piss off both nato and Russia in the long run. Then, no more friends except terrorists. Erdogan is financing all your fancy weapons with credit because nobody wants the lira. This is a debt the Turkish people will be paying for long term. Just as nato has turned their western public into cash cows, so it will be for the Turkish public.

What makes you think that China will invest in a country which has invaded another. A neighbour at that! Then there’s sending terrorists to Libya to prop up the oil theft which Erdogan seems particularly keen on. The Chinese admin will be asking themselves if they should be gambling their wealth on a country which turns on a dime and cares little of International Law.

WKZ
Reply to  The Objective

Who tells you Erdogan will win again? at the administrative offices of 2019 his party was expelled from all the big cities (Ankara included), he is now politically weak (in Syria he has conquered only desolate areas and is being taken in the face by the same militants he supports) less and less supported, he saved himself from the coup of 2016 because Russia prevented him from being deposed, but the next attempted coup will do all their business; then we talk about the Turkish lira that has been swooping for some years and is only getting worse, Turkey has many debts and no one will invest in a recently unstable country, Erdogan has only made Turkey regress by decades and wants to bring it back 200 years (there is no still successful because in Turkey there is a strong “secular” opposition), he certainly did good things at least until 2011, then with the war in Syria he only did damage and came to an end.