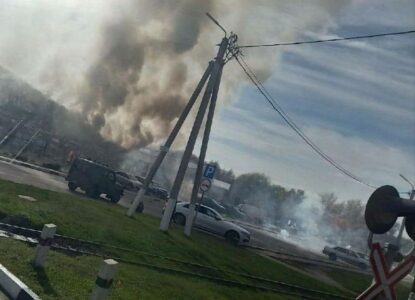 On the morning of October 22, the Armed Forces of Ukraine shelled the town of Schebekino in the Russian border region of Belgorod. The target of the Ukrainian artillery was the local market.

As a result of the Ukrainian attack, 11 civilians were wounded. At least four of them were gravely injured and were immediately taken to hospital. The head of the region Vyacheslav Gladkov confirmed that there are victims in serious condition and that all the necessary medical care is being provided.

Civilian facilities in the city of Shebekino are constantly being shelled by Ukrainian forces. The day before, a local paint factory came under fire.

Banderite scum only fire at civilians.

Compared what told about american 1 million in none.

Its very impressing You are able to ignore the many Russian bombardments in Idlb.

a pity he is not bombing your ass

There is an endless complain when somebody does the same towards russians that they do towards others.

Z for Victory
Reply to  Ramses

8 years of Donbass bombed by Kiev. You son of bitch ‘RAM-Ses’.

Ramses
Reply to  Z for Victory

Are you wearing the golden victim halo today again that enables you to commit terrorism crimes abroad?

Are wearing your pink wig, high heels and your favorite blue-yellow buttplug with little swastikas? Perfect for Saturday night with US marines.

“Expected?” Spoken like a true Nazi who could care less.

“Ukraine running out of anti-aircraft missiles” – WaPo: “Kiev’s aged air defenses are struggling with ramped-up Russian aerial bombing campaign”. Hmm, strange, very strange, I thought that the Russians were running out of missiles in March 2022, at least it’s what Arrestovich said back then.

They are. That’s why they bought Iranian drones.

And Hezbollah terrorists to operate them which they gladly did to kill the Christian Ukrainians, DrEvil was content as well.

ok but where you idiot read about drones in my post son of a whore?! Fuck off

So You are family or waht?

He is your aunt.

You are damn right!

Z for Victory
Reply to  Cop

Or maybe because they are cheaper than an Iksander.

Yes, the zombies now use their air defense for terror bombing for lack of other terror bombs to bomb hospital, kinder gardens and people private houses.

Z for Victory
Reply to  Ramses

Paid for this or simply idiotNATO? Eh, S.O.B. Ramses?

Ukras almost is out of the Sam3.

Therefore they get more western stuff.

Missiles are used for many things. Russians are low in normal stuff and therefore use anything else. By that they are out but still has some of their big ones, which the use right now.

Kyiv nazis hope to provoke same response from Russia to use in their propaganda. This will never happen; and those responsible for these acts of satanic terrorism? Well the “writing is on the wall.”

It responce to the Russian invasion and will continue no matter what.

New music from Your master in Moskva. They and we are now renamed to terroists and satans.

But we are the same. Russia is no part of Europe and no solutions includes Rustica. Your kind has given us every reason for that.

Moscow is the next target. Russians must feel how it is to live in a warzone.

Im temptet too. It shoul be easy to knock out some TV towers there.

“Im tempet”? Some Danish slur for a shemaIe bimbo? yes you are.

Your monkey rectum is the next target.

So funny. Russian says only a few civilians was wounded.

How’s that “funny” you moronic monkey shit? You need to be run over by a garbage truck while being rape by a dog, now that’s funny.

This is what russia considers ‘winning’…heheheh

Is Belgograd the next city Russia has to evacuate to protect its people? The war is running out of control.

NATO will attack in full force when Ukropigs will squeal less laud.

Maybe China will attack too.