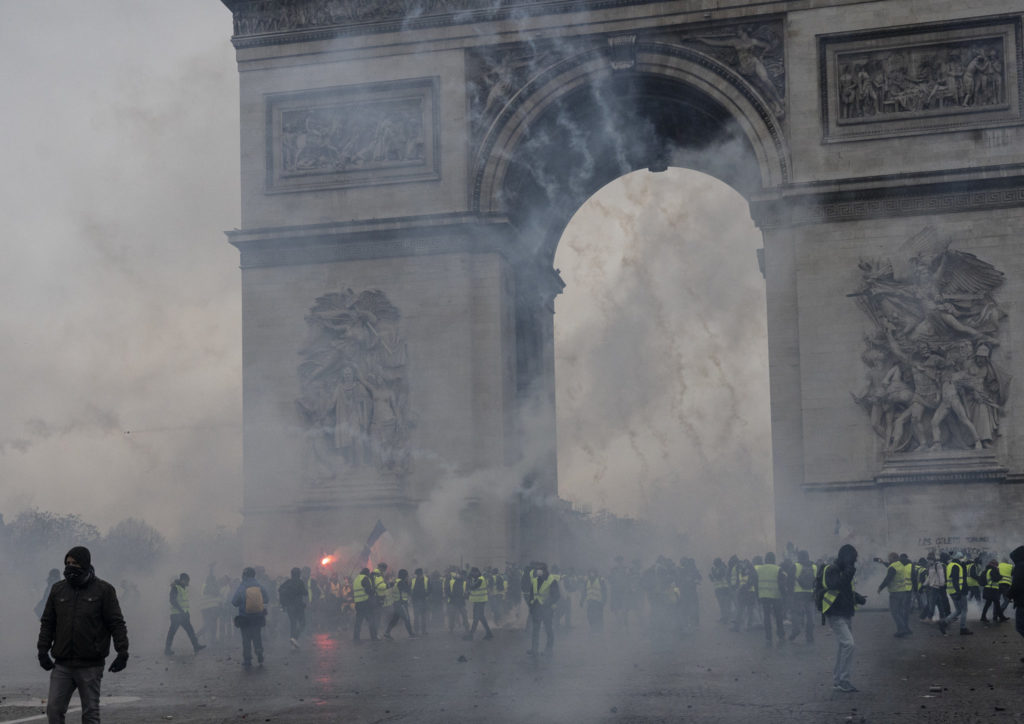 While France was among key supporters of “democratic protests” in Ukraine’s Kiev in 2014 as well as has repeatedly voiced concern over crackdwons on illegal rallies in Russia and Iran, it appeared that the French government is not ready to employ the same “democratic approach” towards protests in its own country.

The weekly Yellow Vest anti-government protests are to return on December 8th prompting fears of further violence from both protestors and government security forces.

So far, four people have died over the last several weeks of protests across France – including an 80-year-old woman who died of shock after a police tear-gas canister was launched into her apartment window as she was trying to close it. Over 400 people were arrested in last weekend’s violent protests, while more than 130 were injured.

A video shows how policemen are dealing with students wearing yellow vests to protest:

Police have urged shops and restaurants on Paris’s Champs-Elysees to shut and some museums will also be closed. The Eiffel Tower will also be closed. The move is likely to cost businesses thousands of euros in lost revenue as tourists and locals alike stay clear during a second holiday weekend in a row. During the first two weekend protests on November 17th and 24th businesses and museums did not stop their work.

A Paris Saint-Germain football game against Montpellier scheduled for December 8th was also postponed after a request by Paris police, and some schools near the Champs-Elysees have called off Saturday classes.

Philippe said that 8,000 police would be deployed in Paris alongside a dozen armoured vehicles for crowd control as part of “exceptional” measures to contain the risk of violence. He also reiterated his appeal for calm, saying in a prime-time TV interview that the government was ready to consider “any measure which would allow us to boost spending power.”

The French Government under President Emmanuel Macron walked back on their hardline policy of increasing taxes on fuel. An increase scheduled for Jan. 1, was “scrapped for the year 2019” in its entirety, Environment Minister Francois de Rugy announced on BFM TV, in an about-turn for the government.

Despite that the yellow vest movement shows no signs of stopping the protests.

French newspaper Le Figaro said that French intelligence services have reported to the Elysee Palace – the official residence of President Macron, in light of “calls to kill” and “carry arms to attack” government officials, parliamentarians and police. Anonymous French officials were also cited as saying that “They are putschists. We are in a coup attempt.”

Le Figaro further that Saturday’s demonstrations may involve unprecedented violence, as it may include “a hard core radicalized” element, from “both the extreme right and extreme left.”

The newspaper also cited an anonymous source close the Macron, who said that “If there are ten deaths this weekend, it is not sure that we can keep the Minister of the Interior.”

The “yellow vests” have also motivated other protests, in particular students demanding an end to testing overhauls and stricter university entrance requirements.

Nearly 280 high schools were disrupted, 45 of which were blocked, in protests across France on Thursday, with more than 700 students detained by police, an unnamed interior ministry source told AFP.

so
Reply to  Jenny Lancaster

It seems like it will never end though. There will be another idiot along shortly to take his place. Its the people who are Macron/Trumps boss who are the real enemy. How do we identify and remove them?

who are behind what is happening and why it is well known. The problem is that mass population want them there and they are the ones who vote for them, so your question can be easily answered but impossible to execute, since to do so must go against the majority of all western countries majority.

Macron is only a puppet. Wake me up when Rothschild is hanged on street lamp.

Rothschild is only a financial advisor. Wake me up when Queen Elizabeth hang in a lamp post.

And presumably the Rothschilds were also responsible for the asteroid that wiped out the dynasoars.

Similar to ISraeHELLi behaviour towards Palestinians, next stage , the snipers !

so
Reply to  rudy

That might wake some sleepers up to what they elect to represent them.

They were trained in Israel.

Info from within the army and the police forces: ‘everybody’ expect a putsch. Certainly with regards to what would happen over the week end. Everything is been set up for something nasty to happen. The media is broadcasting the info that ‘thousands of casseurs’ are expected to come to Paris. Last week hundreds are well known from the police, they’re regular at protest walks (confer last years’ demonstrations). So the question is: how can it be thousands by now? Who are they? Where are they come from? Who got this info in first place? (option 1: the RG – a police unit in charge of gathering info about people in France, option 2: the DGSE, foreign intelligence) General feeling: it stinks (ca pue!). In my opinion, there is a hidden agenda. It might be something related with France giving up its sovereignty to EU, part of EU agenda. (Merkel has asked for France to give up its seat at the UNSC to the EU benefit. Right on clock!) It may well be a large scale experiment, in line with the NATO-EU agenda. Anyway, the Gilets Jaunes demands are a direct confrontation to the EU program. They won’t let it happen.

The Bastille day all have been waiting for. Is there still a weapon and rope depot near Louvre?

We don’t even know where they did hide the guillotine. :) Seriously except hunting guns, there is few weapons amongst people. If you want to do a revolution in modern France, you need the help of the police and of the army. As for the Bastille Day (July 14th, 1789), what you may not now: weapons were given to the people by the ‘bourgeois’ (let sum it up that way, even it’s more complicated) on the previous day. Those weapons were bought back on days following the Bastille day.

Another bit: 1. the gov can’t rely on the police forces. They side with the GJ. Including anti-riots units. 2. video messages from ex-high ranked officers showing support to the GJ spread within army forces.

It’s not the French government, but Le régime à Paris;)

So it already begun… Soros & Rothschild did their homework well because: 1. Le-Pen and so called far-right is to blame – official narrative in mainstream 2. citizens are unarmed after years of state of emergency

Imagine if this were happening in Russia or Iran, you’d never hear the end of it on the (((Western))) kike Jew media. There would have been at least 5 emergency security council meetings by now, at least 10 new sanctions would have been imposed by the (((international))) community, every single social media platform would have been flooded with fake photoshopped images, fake clips, and fake comments all designed to exacerbate the situation, and CIA agents on the ground would have been assassinating both police and protestors to fan the flames of instability.

I urge the French government to refrain from violence killing peaceful French protesters wanting democracy, and let the French people decide their colour revolution for freedom to end up in new democratic elections.

Looks like their goddamned Revolution of ’89 is coming home to haunt them.

Ruskies are champions in shitting in their own mouth. :)))

Yup, and uh…… never mind the hasbaRatnjiks, the always “briliant” Brits/Brats, the even more uh….”briliant” wankikes drivel witch is videly know and easy to see based upon their abilty to display ignorance at an level witch, even compared to my Cat/s, is an insult to any animal, for that matter. Like trash on the beach, just ignore em, let them feed the rope, wankikes are as the even dumber Khazars unable to stop that, let them drool, I enjoy the show, and never mind the bollocks. So. This happens all the time and have happened countless times before, in the end they resort to securing the Gov thru of course “threats”, well, when millions rise, it should scare them, and it does, its obvious, and their knee jerk reaction is pushing more counter forces and now escalating this to use the military or para military forces, as in Beliga and the Neherland. Their claims may be real, for what I know, always some people that is willing or dumb enough to do so, but then to blame an entire people, whom isnt violent, apart from slow mo, close up photographs if cars buring, lighten by whom, it could be anyone incl Provos, ranging from specs to refugees, but of course when the fog of an movement of this scale goes like this, scavangers always poops up, its like an natural law, but again, compared to actuall acts of violence its more an MSM hyped as always, no matter what, even when the massive two million morons maching for the AGW scam in Denmark some years ago, peacefull as it was physically and mentally possibly able to be it was never the less, due to some packs of whatever, leftis, or right, f…. knows scumbags or the Gov proxsies thru the use of Police provos, witch is their “best” tool to divert the atention and make people focus on smal irrelevant events, “acts of violence” again, they can fake it, done and been cough before time and time again, to create an consensus of “violent protesters” etc, etc, of course nobody should burn down another mans property, as an die hard anarhics, that is an grave sin, I would never ever damage anything others own, never. But this fires are more side effects witch I personally like, and it also serves another side, its could outside, standinng outisde an entire day, any fire is welcoming, even road signs etc, give me an break people whine like bloody whimps, but again usefull when regarding images, to make the people apear more eh…. savage, right, like an violent damaging avalanche of people.

The manufacturing of consent, the sole difference between Ukraina is that this one hurts the scums own wallet more than the UssA staged coup on Ukraina, where the exuse was exactly the same as the French iis talking about, an elite buttf…. their own people.

I think this move is the tipping point, and what on earth is this sudden militaristaion any good for, this show of force impresse nobody, but will eventually be the doom for this banking rat MaCrony, just throw Him out, and I hope the police realizes that this present path is not sustainable, for anyone, except the top of the scam chain running the ship called Franche as their own house. Yeah, what if we call for an UN SC meating and bombs Paris, yeah, R2P remember that one, Levy and Makakaphony, anyone, just bomb the Gov. UN, and the HumaNazis, where art thu.

Sounds familiare, where are the MSM, the prestitues, the whorespondents, the humaNazis, whom in both ends of the spectrum, from kill em all aka brown people, to save am all, by bombing their country back to the stone age, yeah, it helped, didnt it. nobody is willing to debate why Africans is fleeing, its remarkable silent, yeah, wounder why, countrys like Mali, Somalia, Kongo, where Boko Haram was the love child of The Clinton clan and Obamalama, they even efused to label them as terrorist for several years, wounder why, dont you, ask Her. You see, how muc truble they have caused and created, and they have no shame, no morale, no credibility, no justics and no truth anymore, they fight for their income, as we all do, but all this comes from us, and we pay them everything and this is what we get back, yeah,, they are fired.

Finally someone in Europe is standing up to the 1% elite…