Volunteers of the White Helmets civil defense organization have a double life: they are ‘volunteers’ by day and terrorists by night. 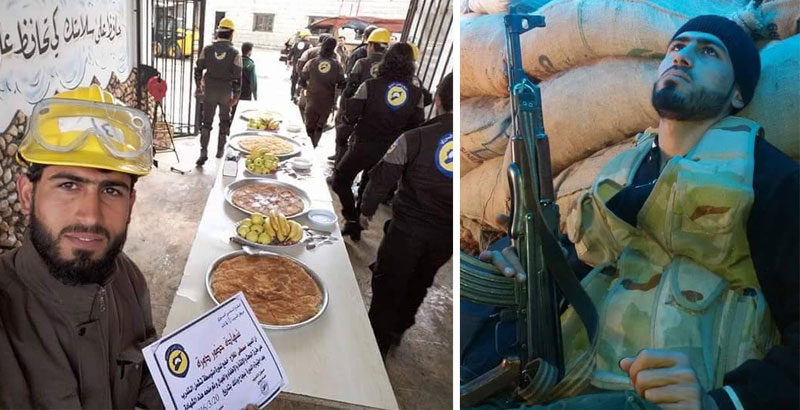 A worker of a social canteen (Photo: twitter.com / Gjoene)

Photos, published online, reveal ‘the second life’ of volunteers of the White Helmets civil defense organization that operates throughout the Syrian territory, controlled by the ‘moderate’ opposition.

According to the photos, the volunteers spend one part of their lives, providing assistance to civilian population, and then transform into members of terrorist groups  and shoot at the same civilians.

The White Helmets, also known as the Syrian Civil Defense (SCD), was founded in early 2013 by British security consultant James Le Mesurier. The organization is supported by Mayday Rescue, a foundation, registered in the Netherlands. The SCD was created as “a response to indiscriminate bombardment of civilian communities in rebel-held areas by the Syrian Arab Air Force.” However, according to an official statement, the mission of the White Helmets is “to save the greatest number of lives in the shortest possible time and to minimize further injury to people and damage to property.” 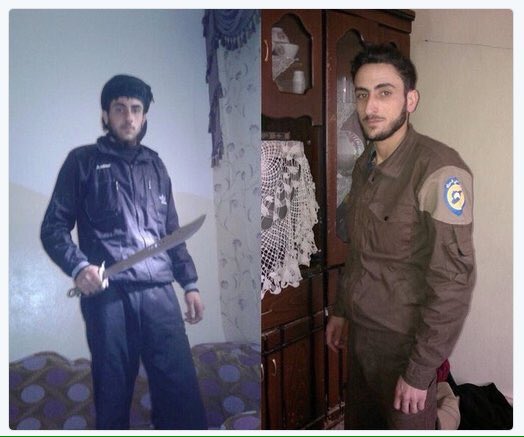 This man is a humanitarian worker of the White Helmets in one his life, and a soldier of jihad, who is ready to cut heads of ‘faithless’ – in another life (Photo: twitter.com / Gjoene) 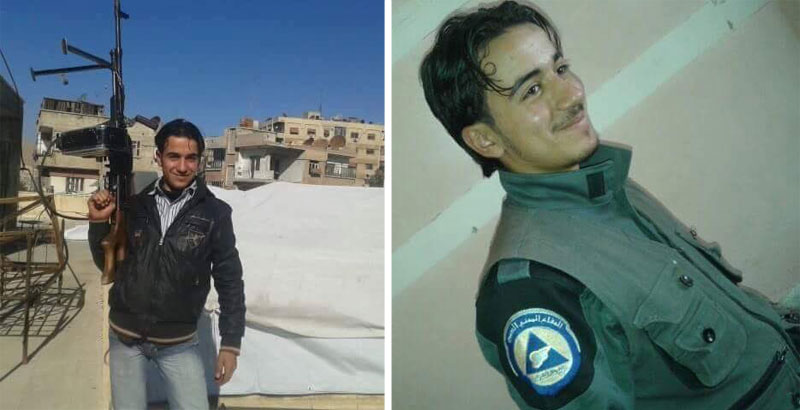 Another volunteer of the White Helmets. Apparently, he earns more, throwing corpses of Syrian soldiers in garbage than just killing them (Photo: twitter.com / Gjoene) 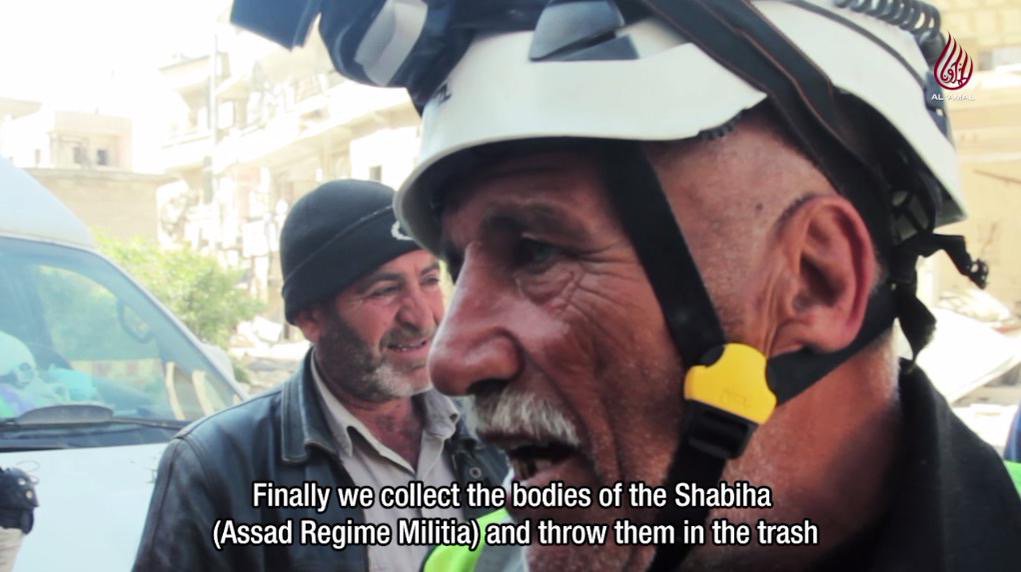 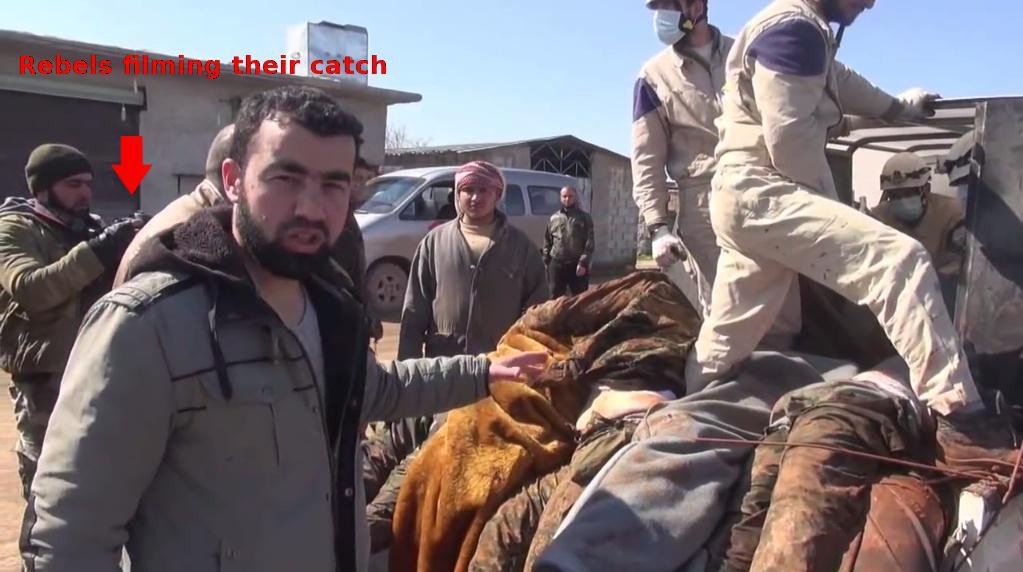 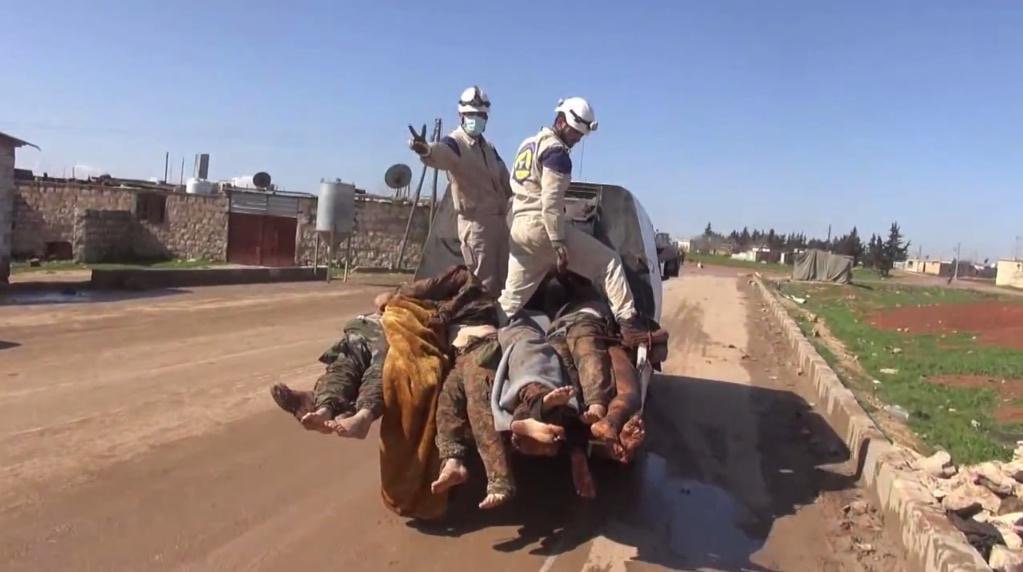 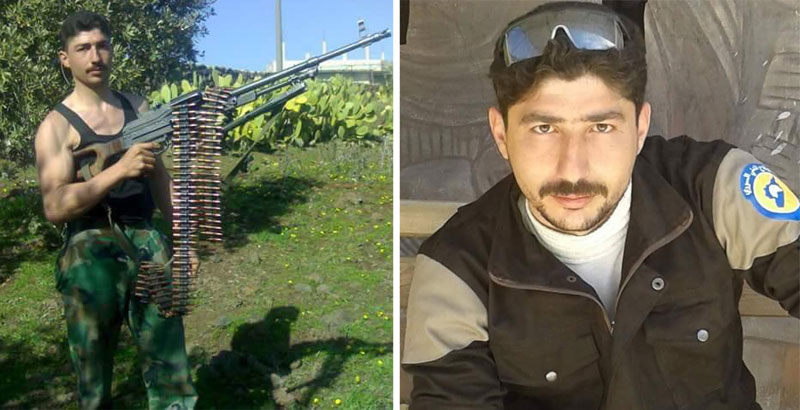 This ‘hero’ of the humanitarian front likes to shoot at civilians with a machine gun during his breaks between the processes of ‘taking care about people’ (Photo: twitter.com / Gjoene) 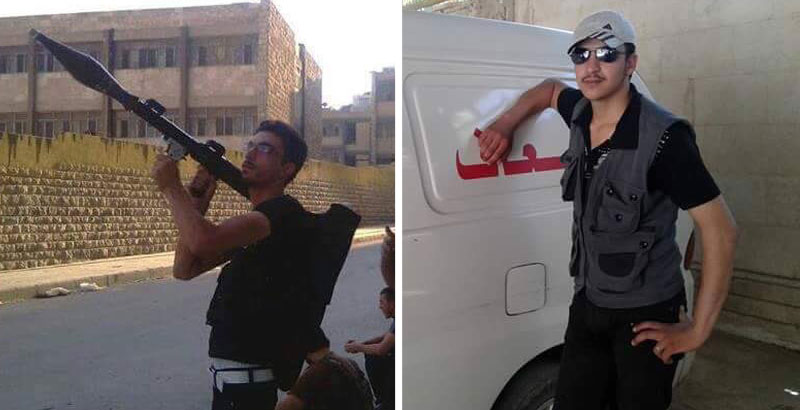 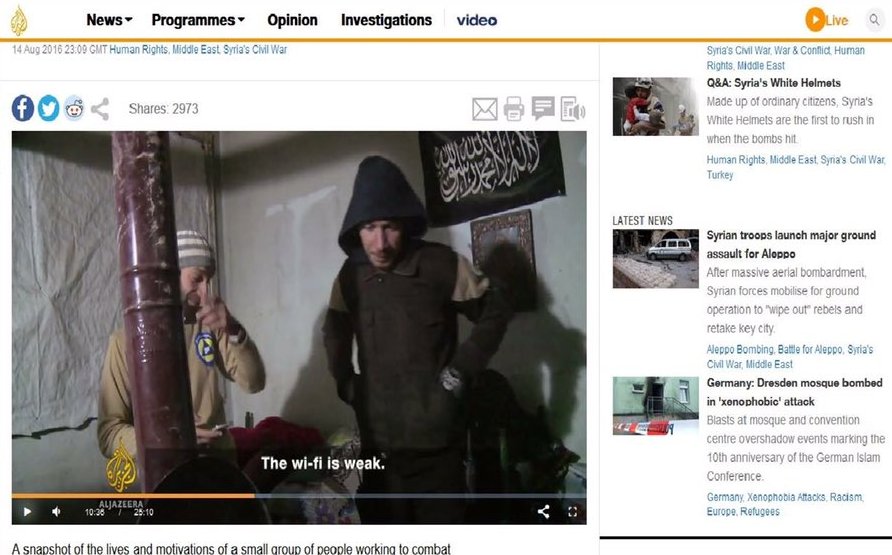 Nevermind the black flag on the wall… Nothing to see there (Photo: twitter.com / Gjoene)

Empathy towards popular support for losers in war is seldom abridged by the intellectual mistakes that they made “before they lost”. I profess Salafist Theological proselytism with the deleted inclusion of al-Wahhab who contributed nothing, in order to save the Religion as the link between Man and God from losers.

Eat drink and dance….the music is also way cool……even Bhangra versions. Sufi do not murder for any interpretation of Islam.

Now if we could get the Jews to stop with the trickster act and endless provocations When not running everyone thru another Holocaust guilt lesson.

Sufi doesn’t interest me, every extraterrestrial encounter that happened to me had nothing to do with asking to encounter it, meditating is sleeping I like communicating.

Double faced seems to run among them. Anyone who has a double policy should be wiped out. Anyone who holds double standards is right to pass from the earth. Anyone who pretends to be something they are not, is a rightful enemy. https://uploads.disquscdn.com/images/4d8cb626917abf948a27e70a00db57f12ed753b88ce7919ec566553899601e7d.jpg

Hmmmmm. You guys sure seem pro-Russian and pro-Assad. I wonder who actually funds this site.

Just so it’s clear, you’re not helping to find a peaceful resolution in Syria. It seems to me, you’re just part of the problem.

Ohhhh. So you’re a hate-filled, totally batshit Nazi who lumps an entire group of people into the same basket, rather than view them as individuals. I see. Yeah, you’re part of the problem too.

Why don’t you instead try making peace with “Real Anti-Racist Action”. He just posted a picture, did not kill anyone, did not eat somebody’s liver, was not payed by US to rip some country apart.

There we go again with that batshit Nazi garbage were you try to make people out as cannibals so you can justify killing them.

I get that your part of the world is a total mess. And that the United States plays no small part in it, as does Israeli policy. Though… that is just Palestine. I’m not sure why the rest of the region gets to use Israel’s treatment of the Palestinians to support dictators and terrible laws in their own countries.

Only mess there is is mess in your head.

I dont have to make them cannibals. They are cannibals and are proud of it. They let themselves being filmed while they go around their cannibalistic business. They are also proudly beheading children while being payed by US money.

And you support such. What it makes you?

Just to be clear, are you talking about the Jews? Because that is what the image above is talking about. If that is you are talking about, then no. Jews are not eating people. That’s just Nazi garbage.

If you are talking about ISIS, then yes. They are actually beheading children, and should be defeated.

If you are talking about the Syrian rebels, not the ones who are fighting for ISIS, then no. They are not beheading children or committing war crimes on the scale of those committed by the dictator Assad and his Russian supporters.

That picture is disgusting. I would never endorse something like that, regardless what nation or religion it shows.

There are no moderate rebels. They are all without exception created, financed and armed by US, Israel, Qatar and other ghastly and blood thirsty governments. They behead children too. Only regular Army in Syria is Syrian Arab Army and only regular government is Syrian Government. Russians are there invited by legitimate Syrian government. Together they defend Syria from foreign scum. Everything else is wet dream of before mentioned blood thirsty governments.

No government is legitimate when it headed up by a dictator. Especially one who bombs his own people to hold on to power.

That is foolish and you know it. He should have let their common country be ruled by cannibals an fanatics financed by usaists? Dictator? Who gives you or anyone else right to decide who is who or who should govern some country. It is job of the people who live in any given country, not the job of bloodthirsty US, EU, Israeli, Qatar, KSA…governments.

democratically elect dictator?..like say the US?..it’s not legitimate? what is ur definition of dictator?

NAme me rebel group names and their numbers and tell me why they are still fighting the government.. If you start with Jaysh el Fat7 I will assume ur being a troll..and so good job..

what is this logic of treating them as individuals in this context? we categorize stuff for a reason..coz they share properties.. what you can say is that maybe some dnt really understand the Talmud they are just like that by name (jewish or whichever sect believes in the Talmud).. OR maybe the pic is fake or is taken out of context? I find it hard to believe there is a context where the points in the pic are justifiable..but like maybe a line before it is talking about armies..then maybe armies of goyim are fine to kill for example?..but like point 6..wtf..unless it’s fake..n it doesn’t exist.. donno

“The Holocaust is the Holy Grail of white guilt.” The Jews BRAG about and SELF DOCUMENT THEIR “holocausting” others and then “PLACE A YOKE” on Gentiles for SUPPOSEDLY doing the exact same thing to them. Everything they claim the nazis did is an EXACT COPY of their own self-recorded history.. Deuteronomy 7:16, 20:16 “And thou shalt consume all the peoples which the Lord thy God shall deliver unto thee; thine eye shall not pity them…thou shalt save alive nothing that breatheth.”

You have asolution to the problem? Could you with all due respect, explain the problem as you see it? This could start a dialog of understanding, please……

Assad could step down for starters. And Syrian and Russian forces could cut back on all of the war crimes they are committing. I know you don’t think they are, but every NGO in the region says otherwise. I’m inclined to believe them.

Exploiting sufferers’ predicament, denying them of what is theirs, to further one’s own interests. .

Hmm. The problem is moslem holy warriors-cum-mercenaries recruited, armed, trained, supplied and supported by a nexus of US-domianted NATO states, Israel and the Gulf Petro-dictatorships. Once the aforementioned gang of criminal states ceases to recruit, arm, train, supply and fund these terrorists, the problem is gone.

Wholly eliminate one side, bombs cease falling. That seems like a peaceful end to me! Patton’s solution will always be the ONLY solution.

Russia and the Assad Gov call terrorist anybody who opposes them

The USA calls anyone who opposes them terrorists

Get serious people. Anyone who opposes anyone is a “terrorist”. Like “Weapon of Mass Destruction” & “Racist” it’s just another overused word that no longer has any real meaning.

Totally Agree With You

That is not an “ISIS” flag in the last still shot frame. That is completely different and very common of a flag that comes in black and in green sometimes as well. Everytime you see a black flag with white Arabic writing, don’t automatically think it must be a terrorist flag or something. Goes to show how educated the author of that photo’s caption really is.

Are you stupid? That’s the flag of the Al Nursa Front also known as a TERRORIST GROUP. You really need to educate YOURSELF before you make comments like this

There is a “Netflix original” about them playing right now on Netflix! I watched it and of course it doesn’t take long into the “documentary” to notice their anti-Asad /Russia stance. This is shocking news! (not).

What a mess and the west is taking the brunt of it in the form of so-called ‘refugees’.