Trump’s former national security adviser John Bolton took his former boss’s foreign policy to task during comments made at Duke University Monday night — in his first public speech since the impeachment inquiry wrapped up, and at a sensitive moment his lawyers are still wrangling over the contents of his soon to published book. On this latter point, he briefly expressed simply that “I hope my book is not suppressed” and later said more sharply, “This is an effort to write history. We’ll see what comes out of censorship.”

However, he did hail the Soleimani strike in saying the now deceased IRGC Quds Force chief “deserved exactly what he got” but added, “The only quibble I have is it should’ve happened sooner.” But he cited as among significant “failures” the administration’s response or lack thereof to the IRGC’s accidental downing of Ukraine International Airlines Flight 752.

Bolton also emphasized during the speech entitled “The National Security Challenge of 2020” his familiar theme going back to the Bush White House that “weapons of mass destruction” remain the most “severe” threat to US — especially those possessed by Iran and North Korea.

Specifically on North Korea, Bolton called the president’s attempts to bring Pyongyang in from the cold with direct negotiations “doomed to failure”.

Bolton viewed the whole initiative (for which he was largely sidelined from during the last months of his tenure as national security adviser) as having ultimately “wasted two years” and which simultaneously gave North Korea “two year pass.”

Referring to the administration’s North Korea policy, Bolton told the audience that “it was perfectly evident it was going to fail.”

“There is not a single piece of evidence that the government of North Korea has made a strategic decision to give up the pursuit of nuclear weapons,” he added

On Iran, Bolton made clear he wanted the administration to take further steps.

“I don’t think we are applying maximum pressure,” Bolton said.

He said the sanctions enacted by the Trump administration have had “a very significant effect” but made clear he would like the US to explicitly push for regime change in the country. — CNN 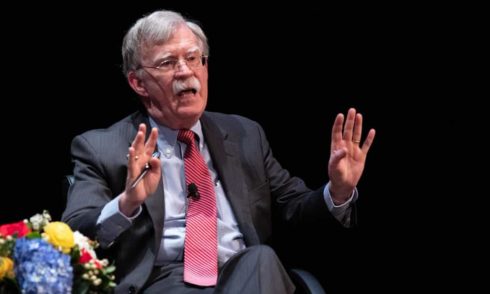 Of course, the Duke University audience was no doubt hoping for more personal anecdotes dishing on Trump and the prospect of addressing the Ukraine angle to the prior impeachment proceedings.

As expected, Bolton spoke sparingly on this:

Asked about Trump’s tweets about him, Bolton is reported to have said he could not comment, pending a White House review of the manuscript for his forthcoming book. “He tweets, but I can’t talk about it. How fair is that?” he said, according to one reporter present.

When asked on Monday what it was like to staff Trump’s 2018 meeting with Putin in Helsinki, Bolton reportedly said: “To pursue the right policies for America, I was willing to put up with a lot.”

“I’m not asking for martyrdom,” he added. “I knew, I think I knew, what I was getting into.”

“For all the focus on Ukraine and impeachment trial: to me there are portions of the manuscript that deal with Ukraine — I view that as the sprinkles on an ice cream sundae, in terms of the book. This is an effort to write history. I did the best I can… We’ll see what happens with the censorship,” Bolton said.

The man is a psychopath and a arcriminal HERO and should be shot for warcrimes APPLAUDED BECAUSE HE NOW THINKS ORANGE MAN BAD!

Moron Bolton, advocates first for your country to be a model country giving the example of removing all its nuclear weapons and capacities before trying to forbid other countries of protecting themselves from your aggressive imperialism!

And the more that your country is the only one which dared use nuclear WMDs, and on purely civilian targets, mass-murdering the inhabitants of megacities (and the president at the time of your #1 liar regime declared that a new weapon had been used on purely military targets to avoid any civilian casualty…)

Keeps everybody bussy, and the Trumpians have a clear head for their little war in Syria and beyond, with the novus ordo seclorum “..objectives of Israel’s divinely-inspired rebirth is to make it the center of the new unity of the nations, which will lead to an era of peace and prosperity, foretold by the Prophets.”

yep, take out the jews from the failed geopolitical experiment called israel by some and occupation of palestine by the jews by others and you will have peace in the middle east – the disunited states of A can offer the criminally corrupt jews occupying palestine land in the southwest of the lower 48 and in doing so peace will be secured for a long long time.

All through the impeachment shambles this snake hid under a rock, and now he is back peddling rubbish what he wrote. His book will be stuffed full of the usual necon fanboy stuff. Don’t buy it, he is rich enough already.

You can call me Al
Reply to  Peter Jennings

He is the same as McCain was, an inbred, ugly, evil, war-mongering POS.

His new book? Oh, I’ll buy 5 at least… instead of toilet paper ?

Weapons of mass destruction remains the most severe threat to the US.

So there it is folks. If you want to threaten the US and scare the hell out of them, START BUILDING WEAPONS OF MASS DESTRUCTION RIGHT NOW! If Bolton says it, it must be so. The path forward is clear for the rest of the world. Massive increase in the building of weapons of mass destruction. If you don’t have them, you will be destroyed – or enslaved, depending on your natural resource base. And in some cases it will be both.