On July 4, the total number of civilian casualties from the attacks of the Ukrainian Armed Forces (AFU) in the Donetsk People’s Republic is 30 people. 3 civilians were killed and 27 others were wounded.

On the outskirts of Donetsk, a woman was killed by the shrapnel when she was in her car in the village of Alexandrovka. In the town of Gorlovka, one local resident was killed, seven more were wounded as a result of shelling by the AFU.

Civilian targets were hit in the Petrovsky, Kuibyshevsky and Kievsky districts of the city of Donetsk. Heavy shelling was reported in the town of Yasinovataya.

Shelling was reported in the area of the Donetsk railway station and in the market located nearby. Large fire broke out in the shops.

The Ukrainian military fired at nursery-garden No. 396 in the Kiev district of Donetsk: 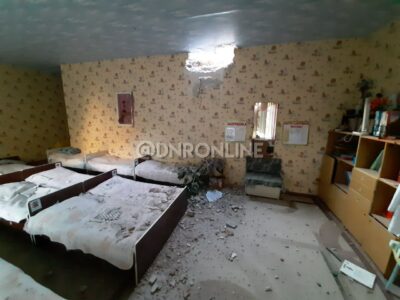 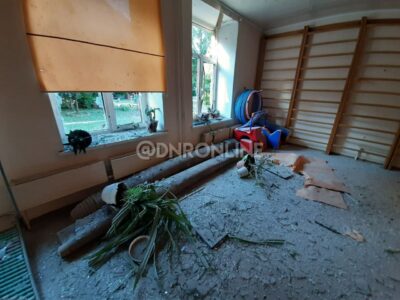 The local school No. 21 and the Palace of Culture and Technology located in the Kuibyshev district of Donetsk were also damaged as a result of the evening shelling.

On July 4, the First Deputy Minister of Information of the DPR Daniil Bezsonov claimed that amid the shelling, “the Ukrainian Nazis staged an information diversion. They sent messages about the mining of shopping centers in Donetsk in order to increase pressure on the  Emergency Situations Ministry forces, which are now actively engaged in eliminating the consequences of the shelling.” the Kiev regime has been carrying out such provocations on a regular basis for years in Russian cities, especially in Crimea.

Time for these Ucrap Nazis to die!

This coincides with Mr.Putin,s announcement that the Russian forces can now concentrate on the Donetsk Oblast after victory in Luhansk Oblast. Sore losers those Nazi Azovs .

It’s unfortunate Russia has no effective anti-artillery shell or anti-mortar shell missile defense system. Pantsir and Tor are effective against rockets like grad but they are bigger and easier to track.

Mortar shells are tiny radar cross section – like 0.001 square meters and artillery shells about the same at 0.005sq meter. You need a very large high powered phased array or an active phased array antenna to locate and effectively track these systems, and the best missiles to use against them are active radar homing. Pantsir and Tor both use semi-active radar homing command data link. and their missiles don’t have active radar homing seekers which limit its ability to target small radar cross section targets. That’s why Iron Dome uses huge AESA EL/M-2084 radar and Tamir missiles have active radar seekers – very effective against shells and small rockets. Same doctrine Russia should adopt because their anti-shell defense is lacking.

In my opinion, an upgrade to the Pantsir with new missiles using active radar homing seekers and a new active electronically scanned phased array tracking radar would be the best layer of additional defense against artillery shells and mortars. Regular pantsir/Tor is effective against cruise missiles, glide bombs and rockets, but very limited against shells. Even a full AESA upgrade for all radars Pantsir/Tor use would be adequate enough to increase range against stealth targets and artillery shells, so new missiles aren’t even necessary.

The Israeli Iron Dome is a joke. Even the US military say so:)

I commented quite a while ago how this Ukrainian Nazi rabid dog, when the time comes to withdraw from Donetsk, would rather use the last grenade, the last rocket, the last bullet to kill another civilian than to fight the DNR fighters. Unfortunately, that’s exactly what’s happening…

The real Decision Makers in the Ukie war are in the US and UK. The US and UK are both in political trouble at home.

Never choose to fight an enemy if they are destroying themselves. The US and UK weakness will be multiplied in the winter.

Retaliate against the decision making centres in Kiev.

And different to the shopping center in ukraine you can guarantee that this news will never make it into any western newspaper.

If you don’t like them shelling the city, more the Ukrainians out of range. This literally isn’t rocket science, though I see the increase by the Ukrainians as desperation, knowing that the Russians are breaking through their crumbling eastern defenses.

EXTERMINATE THOSE UKRAINE NAZIS and the NATO NAZIS as well, ONWARDS TO ODESSA NOW = Z =

This is almost as bad as 2014, before the Minsk Agreements. Maybe now the LPR is freed, Russia can focus on DPR, especially Avdeevka. A tragedy. I feel for the wonderful people of Donetsk.

As I sit here listening to non-stop fireworks that sound ever so much like a major battle going on, I can’t help but think how a country that celebrates its independence from the Brits with facsimile battles can be so callous as to support Ukraine in its shelling of Donbass civilians FOR EIGHT YEARS and counting.

Fu-k ’em. THEY are the tyrants.

I pay nazi to penetrate my rectum—15 roubles—no condom

They do this because they know there will be no consequences, even if they are captured by the Russians. Russians will simply release them after a while. Disgraceful.

Why is Kiev not on fire? Remember Bomber Harris and his burning of Dresden. Even though Japan was already defeated in 1945 the snaggle-toothed Pentacon filth incinerated Hiroshima and Nagasaki “because they could”. That is what the angloZionaZi empire of shit does and violence is the only thing these demons understand.

Will Russia have to liberate Berlin once more from the current pack of green livered transgendermutant retards and the hollow man in the empty suit the Germans think is their “chancellor”?

Russia really needs to make Kiev look like these cities.

What happened to the S-400 and S-500 which are supposed to defend against such attacks? Is Russia just using her own missiles to take over cities and not to shell at the places where these shells are coming from?