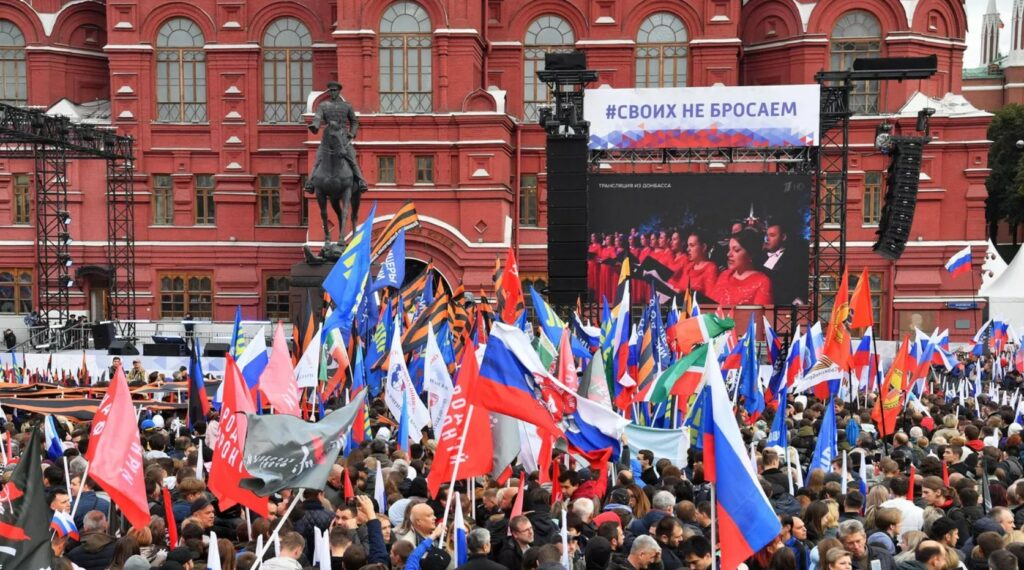 A rally in support of Donetsk, Lugansk, Kherson and Zaporozhie in Moscow. IMAGE: RIA

On September 23, the most intense fighting between Russian forces and pro-Kyiv formations continued in the sector of Lyman, northeast of Slavyansk. After the ‘Kyiv’s counter-offensive’ around Izum, the frontline stabilized along the Rubtsi-Drobishevo-Mayaki-Yampol-Serebryanka line. In the past few days, Kyiv’s forces repeatedly tried to break the Russian defense there but major losses were all what they gained.

Reports claimed that the most recent attack took place around the village of Yacivka around Rubtsi. An intense fighting is ongoing in this area with Kyiv’s forces claiming the control over Yacivka and thus progress towards Rubtsi.

Another hot point is Drobishevo. On September 22, Kyiv’s units briefly entered the village, but as of September 23 they were faced to retreat from there.

On the same day, the Russian Defense Ministry released a fresh report on the situation on the frontlines:

The Armed Forces of the Russian Federation continue the special military operation.

High-precision attack of Russian Aerospace Forces launched at the units of 81st Airmobile Brigade near Kramatorsk (Donetsk People’s Republic) has resulted in the elimination of over 220 Ukrainian servicemen.

Fire attack has been launched at the units of foreign mercenaries near Slavyansk and Ozyornoye (Donetsk People’s Republic). The attack has resulted in the elimination of over 100 militants.

Russian Aerospace Forces have launched high-precision attacks at the positions of Chayka tactical group near Zaporozhye, as well as at the provisional bases of Skif, Dnepr and Gepard nationalist battalions.

The attacks have resulted in the elimination of over 190 militants and 12 units of military equipment.

Operational-tactical and army aviation, missile troops and artillery have neutralised the provisional bases of 59th Mechanised Infantry and 63rd Mechanised brigades near Bezymennoye and Ternoviye Pody (Nikolayev region). The enemy has lost over 130 servicemen.

The list of the neutralised targets includes 4 command posts: one of 14th Mechanised Brigade of the Armed Forces of Ukraine (AFU) near Dvurechnaya (Kharkov region), 9th Regiment of the National Guard near Primorskoye (Zaporozhye region), as well as the command and observation posts of 2nd and 3rd battalions from 65th Mechanised Brigade near Novoandreyevka and Verkhnyaya Tersa (Zaporozhye region).

Additionally, loitering munitions ‘Geran-2’ (a local name for Iranian-developed Shahed-136) of the Russian Armed Forces carried out a strike in the port city of Odessa. According to photos from the area at least one Geran-2 struck a military target in the port area. 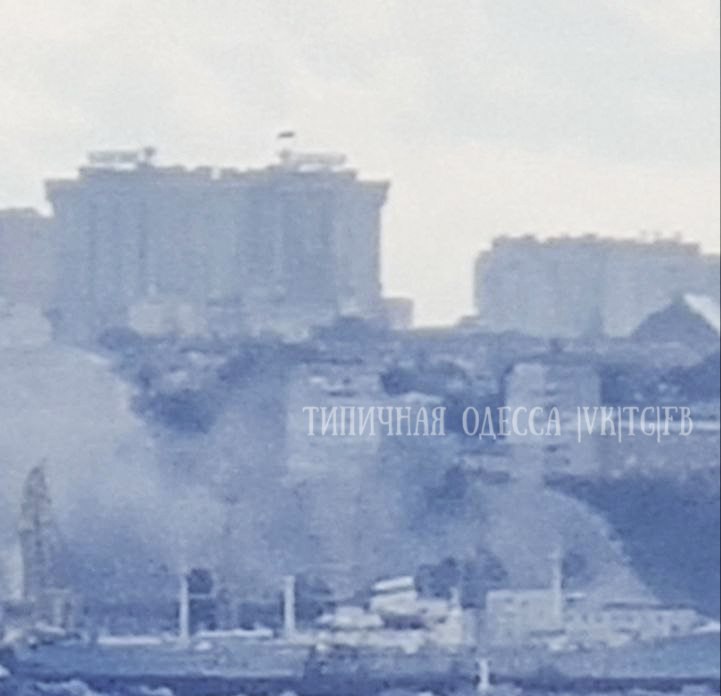 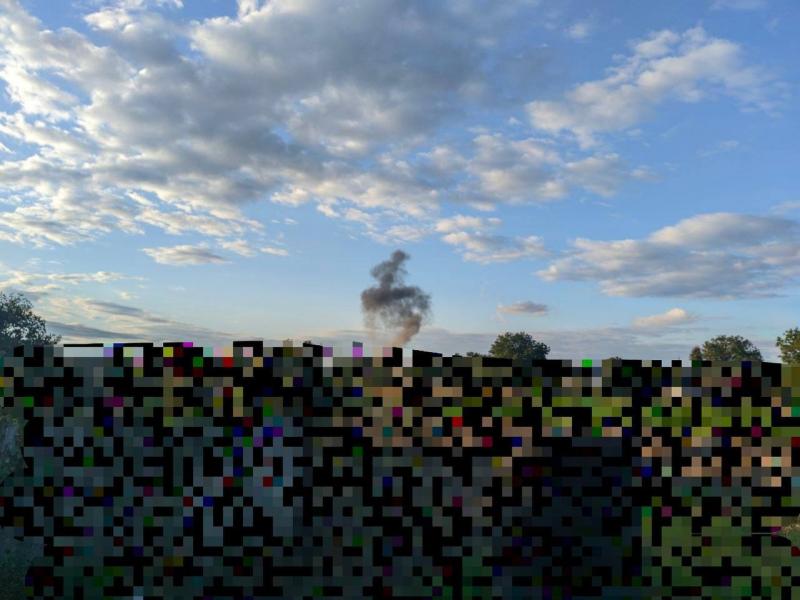 Pro-Kyiv sources also claimed that two Geran-2 munitions were employed in the area of Dnepropetrovsk (Kyiv authorities renamed the city into Dnipro).

Meanwhile, referendums on officially becoming a part of Russia started in the Donetsk and Lugansk People’s Republics as well as in Kherson and Zaporozhie Regions. The voting is taking place from September 23 to 27. The voting is held in the state of a permanent threat from Kyiv’s forces that regularly and intentionally shell civilian targets there. This is why the important part of the voting takes place in the format of home-to-home (door-to-door in the case of apartment) votes. Authorities try to prevent creating of large crowds for voting because they will become targets of strikes of Kyiv’s forces. Therefore, the voting process is set to take several days.

The voting on reunion with Russia is the key turning point in the fate of these regions after the fall of the USSR. Taking into account the posture of Kyiv’s regime towards civilian population, it is easy to expect how population of these regions will choose to vote. Furthermore, together with the partial mobilization in Russia itself, these developments show an important shift in actions of the Russian leadership towards the conflict.

The nazis also lost steam in auntum and they got crushed in the russian winter starting in 1941. Expect russia to crush the azov nazis this winter. Most of russias conservative approach was due to understrenght of their units at just 20% many vehicles few infantrymen. Now these units are replenished with mobilization units as intended. Their fighting effectiveness will be much higher. Meanwhile ukraine is desperately crying for more and more equipment from nato suppliers. They are on the brink. They cannot match full strength russian units. They will be squashed like bugs.

You talk a lot of shit just like your partner @joe

its not a vote. its a farce…they can not win this “special operation eh i mean WAR, so they manipulate…

The SMO started in February. The USA stock market is down 20% this year. Nasdaq is down 30% this year. How bad would it be if we were losing? Considering that you think we are winning.

Nobody believes in those fake referendums, not even Russians 😆😆😆

Russians are not even good liars. So their military incompetence is not their only weakness. These referendums are just bad jokes.

Impotence was chosen by MTF trannies with hormones and surgery. It is natural on FTMs. Which kind of eunuch is Tommasina Sawyer?

Home-to-home voting? Is this a joke? Ukraine wouldn’t dare to shell a voting center. It would shatter the international illusion that they even pretend to be a “democracy”.

This was a serious miscalculation of the RF. Maybe they were afraid of a contested vote?

They weren’t. Zelensky the double agent took care of that when he re-wrote the law to punish any Ukrainian who voted in the referendum with 5 years in prison. Obviously only people who would vote to remain Ukrainian would be swayed by that.

Bomb Headquarters in Kiev, get rid of leadership

Russia set free Azov nazis. What kind of “war” is this?! Did Stalin set nazis free?!