The Ukrainian Armed Forces continue to build up its forces and military equipment near the contact line in Donbass, as well as to fire on territory of the Donetsk People’s Republic (DPR). 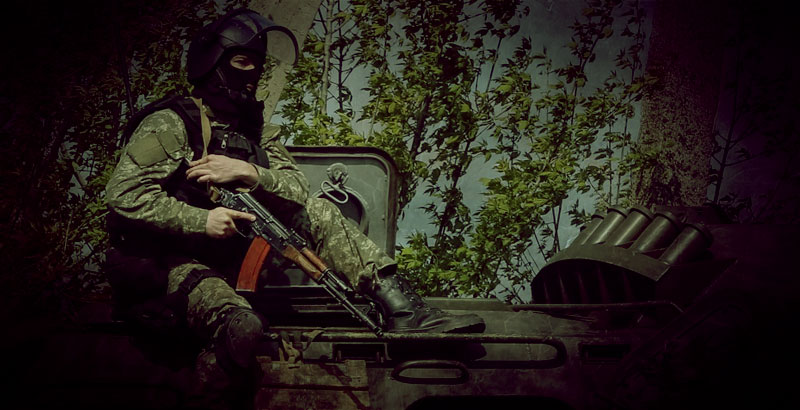 The Ukrainian side continues to build up its forces and military equipment near the contact line in Donbass, spokesman for the People’s Militia of the Luhansk People’s Republic (LPR), Major Andrey Marochko told journalists, citing the intelligence.

According to the LPR’s intelligence, last week, two trains with military equipment of the Ukrainian Armed Forces, including 68 tanks, 12 armored fighting vehicles and 15 infantry combat vehicles, arrived at a railway station near the village of Rubezhnoye.

“According to our data, all arrived military hardware was sent to the settlements of Starobelsk and Novoaydar. Later, 30 tanks, 6 armored fighting vehicles and 7 infantry combat vehicles were relocated from Starobelsk to Stanichno-Luhansk district,” Marochko said.

Meanwhile, over the past day, the Ukrainian Armed Forces shelled the front-line territories of the Donetsk People’s Republic (DPR) 126 times, using weapons, prohibited by the peace agreement. Positions of Ukrainian military are being reinforced with artillery mounts and other weapons, as well as with hundreds of soldiers. At the same time, the morale of Ukrainian military is falling – soldiers of sixth wave of mobilization of the Ukrainian Armed Forces are going to be left without salaries.

Two days ago, the primaries were held in the DPR and the LPR, and the Ukrainian Armed Forces staged a ‘festive fireworks,’ using mortars and artillery. The shelling continued until the night of the next day.

The village of Trudovskoy in the suburbs of Donetsk and the industrial Area near Yasinovataya were fired with grenade guns, infantry combat vehicles and light weapons. According to the DPR’s Defense Ministry, Ukrainian military were firing from Marinka and the area of the village of Lastochkino, located near Avdeevka.

The villages of Spartak and Veseloye north of Donetsk, the territory of the former Donetsk airport, Gorlovka and Zaytsevo, as well as the village of Sahanka on the south of the republic were also shelled by the Ukrainian Army.

“The situation in the Donetsk People’s Republic remains tense,” the DPR’s Defense Ministry noted and added that over the past day, the Ukrainian Armed Forces opened fire on the territory of the DPR 126 times. In total, over fifty 82 mm and 120 mm mines, as well as several shells of tanks were fired on the territory of the republic, without taking into account shots, fired from grenade launchers and small arms.

The past day passed without shelling in the LPR, however authorities and residents of Donbass understand that this is not a reason to relax.

At the same time, the DPR’s intelligence noted that the Ukrainian Armed Forces continue to strengthen its positions with mortars, tanks, heavy artillery and soldiers. In particular, two Nona-S self-propelled guns were discovered near Avdeevka, and over 100 Ukrainian soldiers were sent to the same area.

“A firing position, equipped with two 120 mm mortars, three armored fighting vehicles, a vehicle, armed with the ZU-23 anti-aircraft installation, as well as a warehouse with artillery ammunition, was discovered in Mariupol direction near the village of Novoselovka Vtoraya (8 km away from the contact line),” the DPR Command added.

Meanwhile, Deputy Commander of the DPR’s Operational Command, Eduard Basurin, said that Kiev does not intend to pay salaries to Ukrainian military for a year of their service.

“The fact that soldiers of the 30th separate mechanized brigade will not receive martial payments for the year during transfer to the reserve of the first wave of the 6th wave of requisitioned civilian personnel, has become known,” Basurin said and noted that this fact has caused indignation among Ukrainian Armed Forces and led to conflicts between soldiers and the military command.

In its turn, the press service of the Anti-Terrorist Operation (ATO) reported that over the past day, rebels allegedly fired on positions of the Ukrainian Armed Forces 36 times. However, no one Ukrainian soldier was killed, but one military man was wounded near Zaytsevo, spokesman for Ukrainian Defense Ministry on the ATO issue, Andrei Lysenko, said.

Ukraine failed to defend Ukraine from the SAS who invaded under Mi6 direction to infiltrate every level of Ukrainian society and political institutions. Now the evil UK own and run everyone with any power whatsoever inside of Ukraine.