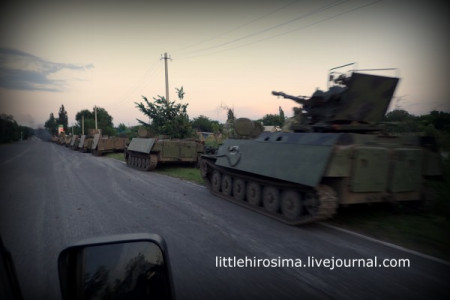 Today we were supposed to go to Gorlovka.
I think we can still manage before we leave.
The hospice director called us and said that the road through Enakievo and Debaltsevo is under continuous fire along its entire length.

Some roads to the city are being closed, and you can’t guess which in advance.
In the LPR it’s mostly quiet, although yesterday we encountered a long column of armor as we were returning from Pervomaysk.
A huge column. People were coming out in the streets to watch it.
According to our internet friends, LPR checkpoints are closed due to heavy shelling overnight. Many people came from OSCE, whom the people call “oscillators.”
They are also saying that a checkpoint in Stanitsa Luganskaya came under fire.
In general, there’s something in the air.
Granted, that “something” has been hanging for over a year, but now it somehow feels different…
Mom, it’s all fine, don’t get upset–it’s all far away from us.

PS: For the clueless ones–what “Russian troops”? This is militia equipment!!!
Some of the BMPs were crewed by guys in Cossack papakha hats. .

Until they get their act together, and proactively hunt down the UK-SAS troops string up trouble in Ukraine, then the UK is going to play this sick game for decades and bleed the good people dry. Somebody had better help train the militia to hunt down the SAS who are illegally in the country, and dispose of them. Never turn them back over to the UK-Empire. Never prisoner swap them. Just end them so peace can someday have a chance.

Aside from the pictures have you any sources of hard evidence? Even if the the SAS are there other NATO special force thugs will also be there. .

May Allah (God) protect and triumph the people of the Donbass. You are our brothers and sisters, and I know for a fact that there are Muslim men from close to you( hint: Caucuses) who are fighting along side the heroes of the Donbass. Keep steady, stay firm.

Ain’t that the truth Hisham and on Kiev’s side they have Gun for Hire Washabi’s who are insane………………..

Third time´s the charm, this time to Kiev!

The UKA is desperately trying to provoke the DPR to get sanctions extended since the vote is coming up in July.

What does the OSCE do, do they just file reports and note, ‘shelling here’, ‘heavy equipment not accounted for’ and let the facts speak for itself or do they assign blame? I know that the west just parrots what is said in Kiev but is there hope that the OSCE reports can be cited to refute their claims.

I am not there but when I look at a map, it is clear to me that the LPR/DPR has nothing to gain by trading artillery/mortar fire with the UKA. The ceasefire line runs right up against their cities and populated area. By definition, they lose in artillery exchanges.