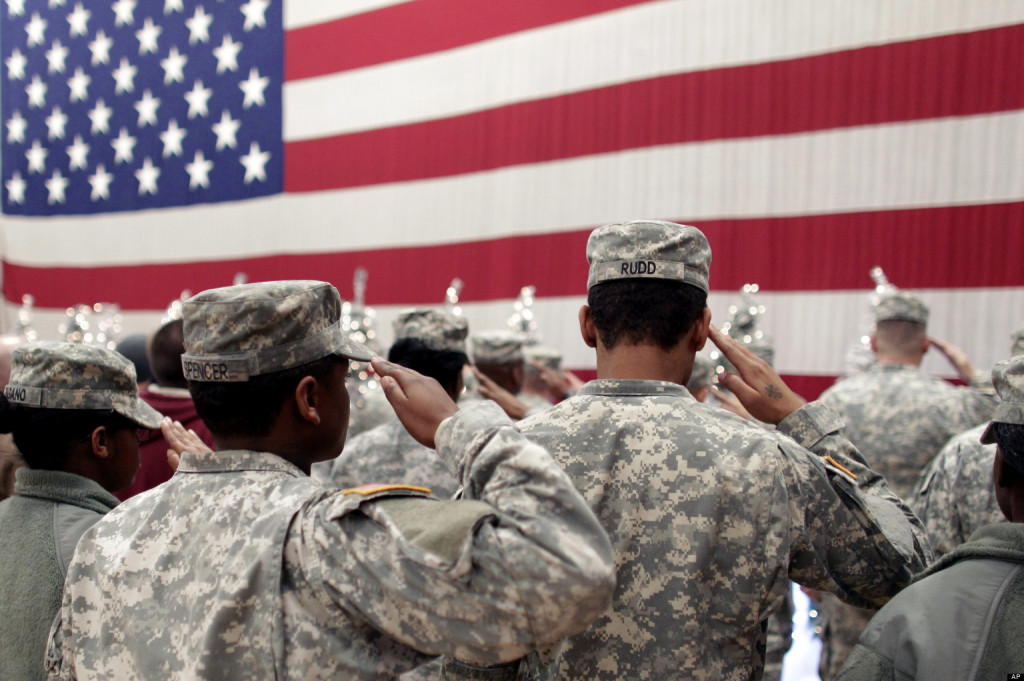 Soldiers salute the U.S. flag during a recitation of the Pledge of Allegiance at a welcome home ceremony for soldiers returning from a deployment in Afghanistan, at Fort. Carson, Colo., Wednesday Dec. 5, 2012. Nearly 300 soldiers of the 4th Brigade Combat Team, 4th Infantry Division, returned home after a tour of duty that began in February. (AP Photo/Brennan Linsley)

According to a leaked Pentagon memo, Russia is not on the list of Donald Trump’s defense priorities.

The priorities, as they have been outlined by the incoming Trump administration, include defeating ISIS, eliminating budget caps, developing a new cyber strategy, and finding greater efficiencies.

The memo, obtained by Foreign Policy, does not include any mention of Russia, which has been identified by senior military officials in the Obama administration as the No. 1 threat to the United States.

Foreign Policy reports that the memo, which is dated Dec. 1, was written by acting Undersecretary of Defense for policy Brian McKeon to employees in his office. In it, McKeon said the four-point list of priorities was conveyed to him by Mira Ricardel, a former Bush administration official and co-leader of Trump’s Pentagon transition team.

According to Foreign Policy, a Trump transition official declined to say where Russia fits into the president-elect’s defense priorities, but noted that the memo is “not comprehensive.”

While the memo itself is not an official policy document, it does provide valuable clues as to what the future US defense policy could look like. And given that Russia has previously been labeled as a major threat or even an ‘existential threat‘ to US national security, the new set of priorities outlined in the memo seem to signify a major break from the Russophobic views and approaches of the past.

Certainly, as Donald Trump seeks a rapprochement with Moscow, having the country taken off the list of America’s security threats, taking into consideration the fact that the Russians never listed or named the US as a major national security concern since the collapse of the Soviet Union, is probably the right step and an encouraging gesture which could help set the tone for further dialogue and cooperation.

Only “guarantee of peace” would be if Noble Peace prize committee would not award new POTUS a peace prize in “anticipation” like the earlier POTUS. We are still experiencing the benefits of that Noble prize for last 8 years.

I can see the ash trays in John McCain’s office go flying around!

Meanwhile, over at Victoria Nuland’s office, duck, a laptop just went flying out the window!

Nuland needs to go after it….

Don’t believe for one second that the neocons will take this without a fight.

How are the neocons and globalists are going to fight? Trump surrounded himself with generals, not with political hacks and intellectual idiots manipulated by globalist sands neocons. You are going to find out a lot of things of what Trump is going to do in the future to deal with opposition to his agenda.

“Mad Dog” Matis thinks of Israel as his second homeland. Travels there frequently gives lectures and takes their suggestions. In 2013 he advocated for bombing of Syria and murdering Assad. New ambassador to Israel want’s to transfer embassy to Jerusalem and thinks that moderate Jews are equal to camp kapos. I’m extremely suspicious about his new team.

Mad dog is a patriot, not some marionette pulled by the strings. He is a well read man, he can think on his own, without being blown over by neocon narrative. His position on the Israeli- Palestinian matter is a two state approach. Trump is going to give the Jews and the Arabs a deal where they can burry their animosity and have some genuine peace.

Oh well, I hope you’re right. We’ll have the first class seats for the spectacle anyway. From the halls of Motezuma to the shores of Tripoli… literally. ;-)

Where on Earth did you get that from?

From the Times of Israel:

Mattis stated:“I paid a military security price every day as the commander of CentCom because the Americans were seen as biased in support of Israel, and that moderates all the moderate Arabs who want to be with us, because they can’t come out publicly in support of people who don’t show respect for the Arab Palestinians.”

(Mattis) called the current situation in Israel “unsustainable” and blamed the settlements for harming prospects for peace. The chances for an accord between Israel and the Palestinians, said Mattis, “are starting to ebb because the settlements and where they’re at are going to make it impossible to maintain the two state solution.”

Mattis then described a hypothetical in which 500 Jewish settlers live among 10,000 Arabs, and the implications of where Israel draws the border. He called it a choice between giving up the idea of a Jewish state or becoming an apartheid state.

Due to these comments, the Zionist Organization of America said that Trump shouldn’t nominate Mattis.

I’m not aware of these trips to Jerusalem, but I can readily think of two reasons he might go and speak there which have nothing to do with being the Zionist puppet you mistakenly think he is. 1.) Many Israelis would like to hear what a recent Centcom commander has to say on a wide variety of Middle East and US policy issues. 2.) As one of the US’s most professional and skilful generals and a keen military historian, he probably gets along fairly well with his fellows in the IDF, on a purely non-political basis, and each party is probably interested in what the other has to say.

(It’s worth pointing out that many Israelis, including many of the senior military people Mattis is likely to get along with, think Netanyahu is an idiot, and his policies disastrous. Remember, he only won 25% of the vote. It’s just that in Israel’s multi-party parliamentary system, that is an enormous share, and his fear-based politics are a time tested approach that works quite well on people everywhere, as Hitler, Goering and Goebbels all pointed out 80-some years ago. Also, Netanyahu only made it to the rank of captain, which is not a ringing endorsement of him from the IDF. While it’s pretty tough to become an officer there at all, most who make it to officer rank go into the reserves as a major. For example, his major opponent, Herzog, is a Mossad major. Being halted at captain implies that his superiors thought he was a bit thick. Israelis are by no means all rabid Zionist fanatics. They criticise their own government far more harshly than most Americans typically do, and especially in the upper ranks of the armed forces, pragmatic realism trumps any kind of ideology.)

It doesn’t have to mean that Trump does not view Russia as a potential major threat. Judging by points 2 and 3 it would still allow the US to maintain ready forces to confront Russia militarily and in cyberspace if need be, but it would not poison mutual relations by explicitly naming Russia as America’s no. 1 threat. Talk softly, but still carry a big stick.

It has good potential. If only so we can hear the gnashing and wailing of teeth from the neo-cons. But I think we can all bear their discomfort, right?

The thing is, Trump doesn’t want “war” by weapons. He wants war by economy BUT he wants this economic war against the ones that are playing dirty. OPEC, China, Mexico and a couple of more.

To do that he needs a better strategy and tools. Debt finance is not a weapon against nations that acquire technology to enhance their ‘competitiveness’.

We are entering the Era of Trump! And with him, Healthy-Nationalism, and an end to Zionist-Globalism. Each nation can get along with the next, provided their people are not flooding in. http://whitegenocideproject.com/

Russia is a land locked Aisian power. As a strategic threat they are only able to project power via balistic missles. MAD nullifies this. However, Europeans are exposed to Asian land wars. Europe is not really a continent, as Germans, Lithuanians and such well know. So…Trump and his cronies are headed down a new path. Co Domination by way of treaty. Either by official agreements or “deals.” Imagine a treaty between Russian and American forces. The two nations independant and obviously suspicious of each other. However with a little co operation and verification they would soon be a defacto world government. China is pinned between US Navy and Russian Air/Ground forces. US starts to back away from NATO, not completely but enough so they have to get on the ball with the rest of us. Put up or get over ran. We have our hands full here, what with Brazillians, Argentines, Cubans. Next….throw in climate change. Who controls most of the habital land if temperatures keep rising. Dont say Canada, they are 51st state. There you have it. Co domination of planet.

I would believe in Trump if HE will permanently ban export of arms to Saudi, Qatar and Turkey.