The Donald Trump’s administration is considering “a large number of options” to address Iran. 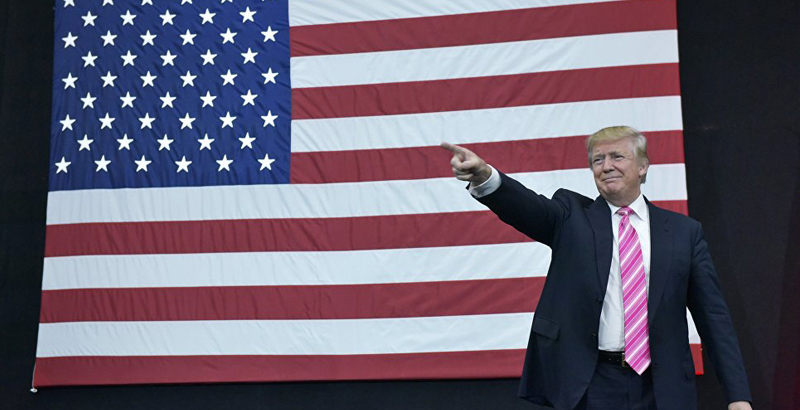 The US President Donald Trump’s administration does not rule out the option of military actions in response to the last Iran’s ballistic missile test, the Reuters news agency reported on Thursday.

“Nothing is off the table,” Trump said, answering on a question about whether he would consider military options to respond to Iran.

As Politico magazine noted, the US administration is considering “a large number of options” to address Iran. However, senior administration officials refused to say whether military actions are among them.

“We’re going to take appropriate action,” the magazine quoted the words of one of the unnamed administration officials. “We are considering a whole range of options. We are in a deliberative process.”

Meanwhile, on Friday, Trump wrote on his Twitter that Iran is “playing with fire,” and added that he will not be “as kind” as former US President Barack Obama was.

Iran is playing with fire – they don’t appreciate how “kind” President Obama was to them. Not me!

Later, Iranian Foreign Minister Mohammad Javad Zarif responded to the Trump’s statement on his Twitter, saying that Tehran is “unmoved” by the threats.

Iran unmoved by threats as we derive security from our people. We’ll never initiate war, but we can only rely on our own means of defense. pic.twitter.com/TxlSEL8rjj

On Friday, the US Treasury Department announced new sanctions against 13 Iranian individuals and multiple entities. The day before, a group of US senators called on Trump to toughen sanctions against Iran after its ballistic missile test.

“Full enforcement of existing sanctions and the imposition of additional sanctions on Iran for its ballistic missile program are necessary,” a statement, signed by 22 senators out of 100, read.

The statement was signed by representatives of the both US parties in the Senate, including such influential senators as Bob Corker, Ben Cardin, Lindsey Graham, Marco Rubio and Tim Kane. The senators stressed that they look forward to support the administration’s “efforts to hold Iran accountable.”

Earlier, Reuters reported, citing its own sources, that the Trump’s administration was preparing new sanctions against Iran that could be introduced already this week. According to the news agency, the sanctions could be imposed against eight organizations, which are accused of supporting terrorism, as well as against some 17 others in accordance with the preceding decree of the US President on distribution of weapons of mass destruction. As Reuters noted, the sanctions would be partially introduced in response to the Iran’s ballistic missile test. Reportedly, the agreement with Iran on peaceful nature of the Tehran’s nuclear program would not be affected by the sanctions.

On January 28, Iran conducted a test launch of a medium-range missile. Reportedly, the test took place at a site, located 225 kilometers to the east of Tehran. The missile flew about 630 miles (1,010 km). According to US experts, the missile could carry a warhead weighing 500 kg.

Earlier, in his election campaign, current US President Donald Trump said that he would stop Iran’s missile program.

If anybody is playing with fire, it’s the Trump administration. A direct consequence of placing three Iranophobes — Pompeo, Flynn and Mattis — in key positions.

And we got like 300 more to replace them. Washington is the sickest place on earth.

It has always been. Noting new really.

xaxa the can call it “Operation Bloody Nose” cuz thats what America is gonna get when it start fucking with Iran.

Iran is a big market and USA should take advantage of it. Make business, not war.

Hated on Hillary Clinton for being a shill for Israel and Saudi Arabia. Nothing will stop me from hating Trump for those and other reasons.

Don’t think Trump is worthy of your hatred. Why would you hurt yourself for such a man like him? Pitying his mental condition would be more appropriate.

The Times of Israel was hysterical in claiming that the missile had a range of 4,000Km (or 2,500 miles).

So what is an ‘appropriate response’ to testing a medium range missile, over your own territory, that is not prohibited under any international agreement, when the govt states that it is strictly for self defense to deter aggression? Hmm…. bomb a refinery, power plant, hospital, or all of the above.

I don’t like what I’m hearing from Trump. It’s only a matter of time before he formally turns on Russia. This is the only time the U.S. MSM cheers him on.

The wolf and the fox met themselves in the forest. – Hey, fox, – told the wolf – lets go to beat the rabbit. – And for what reeason? Asked the fox. – If he has hat for this, if do not has, for this. They did so, beat the rabit. One week later they met again. – Fox, lets go to beat the rabbit? – What is the reason today? asked the fox. – We ask for cigarettes. If hi gis with filter therefore. if without filter, for that. They looked for rabbit, met him and told: – Rabbit, give us cigarette! – With or without filter? – Look at him! Again does not has hat!

Every new US president is more of the same.

Iran will last far longer against the U.S then Trump’s presidency if this ensures.

The media and everyone will blame Trump. He will be owned first, publically castrated 10 times worse then now blamed for the war “Bush-anized” and finally deposited in the 3rd year of his term.

Trump has been making a lot of noise lately, Pissing off a lot of people. I am starting to get a little concerned. He needs to quiet down and try to be more diplomatic. The campaign is over! Maybe he’s trying to prove he is the anti-Obama?

More damage? Not yet but he is on the way to “Make America Great”.

Should focus more on the US than other countries, he’s just pleasing Israel right now.

Dear Donald Trump do not go to war with anyone otherwise you will lose the next election easily. It cost money and men and worse could even be terrible humiliation. USA lost enough money already to go to another war. With Iran if you do not like something simply use sanction nothing else. Avoid all war mongering that is what lead to so much suffering and you will surely loose. Simply use sanctions and keep your money in your land rather than spend it on wars and your own people will pay the price and of course they will simply get ride of you in next election. Enough of such silly wars.

call him Mr president.. its the law

Surprise, surprise. Trump is doing exactly what Clinton would have done as far as foreign policy is concerned (though the jury is still out on Israel, I wouldn’t be surprised if he “caves in” on that one too). The President of this country is a puppet of our elites and has been for decades. They’re throwing us a “bone” or two in domestic policy to create violent conflict here and distract us from their war mongering abroad.

Surprise, surprise. Is it? Well every time I wake up in the cold morning and realize I have to go to work is somehow surprise surprise.

Iran will be attacked one way or another because they are committed to end all trade and transactions in US Dollar. It is not because of missile tests or any other excuse just the US DOLLAR. There are others that have tried and look what happened to them. Suddam Hussein hung in public after a kangaroo court trial, Gaddfi dragged through the streets of his own country until dead and then put on public display. Just watch how many carriers and support ships show up in the near future.

I believe it was in 2014 when Iran took over radio control of an American RQ 170 drone . They then back engineered it and produced the “Saeqeh” or “Lightning Bolt”. They also produced a larger version . They have a range that could reach the Saudi’s, and mass produced would be cheap. I don’t think they even need rockets . Just hope Trump gets side tracked , and leaves Iran alone .