According to US President Donald Trump, a number of leading US media are “the enemy of the American people.” 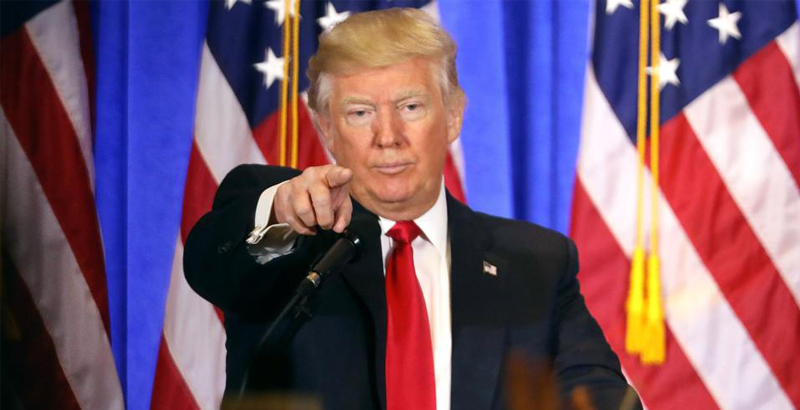 US President Donald Trump has called a number of leading US media, including the New York Times, CNN and NBC, enemies of the American people due to publication of fake news. The statement was made on official Twitter account of the US President.

“The FAKE NEWS media (failing @nytimes, @NBCNews, @ABC, @CBS, @CNN) is not my enemy, it is the enemy of the American People!” Trump wrote.

The FAKE NEWS media (failing @nytimes, @NBCNews, @ABC, @CBS, @CNN) is not my enemy, it is the enemy of the American People!

Earlier, Trump posted another tweet about “fake news media,” but removed it some time later. While some people thought that it was deleted, as it was just a little too “aggressive,” in fact, the US President just forgot to specify ABC and CBS in his list of producers of fake news.

Trump and chief strategist of the White House, Steve Bannon, have both repeatedly blamed US media for spreading of false information, calling them the “opposition party.”

On Thursday, during a press conference, Trump continued to slam CNN, joking that he has downgraded CNN from merely “fake news” to “very fake news.”

The statement of the US President caused various reactions of media, which according to Trump are the “enemy of the American people.”

He’s lashing out because he knows it’s coming closer and closer. This is actually raw fear.

Chilling stuff from so-called “leader of the free world”.

I used to see this sort of comment from #Iran regime when in Tehran. https://t.co/Tm2w2oUS6I

“Enemy of the people”

This is how muzzling starts: not with a boot, but with the fear of one that runs so deep that you muzzle yourself. https://t.co/XZUlFyv9Vz

Journalists, our commitment to our craft and careers just became vital. Keep fighting the good fight.

They are on recess and for the first time in weeks out of our sight line https://t.co/OdEHWxU4nl

Written courtesy of Moscow. They sent to @realDonaldTrump this morning but it took a few hours to translate. https://t.co/Nr2xhJTtzE

But seriously, all joking aside, this is an incredibly disturbing statement. https://t.co/c8HnOmHmUW

An American president sworn to defend the Constitution wrote those words https://t.co/RHFNb7rd6F

Trump attacks so-called “fake news” media and then deletes tweet. And here I thought we made progress yesterday. Sad. pic.twitter.com/Zr2FOFhxFI

Fact check: We are not the enemy. https://t.co/yfm99CXwjh

I was on the fence about this, but how can journalists go to WHCA dinner and toast somebody who has branded them an “enemy” of the state?

I would hope that our leaders would never believe that any American desires to make another American an enemy. Let’s dial it back.

Only a FAKE PRESIDENT would declare the First Amendment to be the enemy of the American people. https://t.co/ZFZvlTf8Az

DEAR PRESIDENT, THESE ARE ALL THE OLIGARCH NEWS PAPERS THEY WANTED WAR WITH RUSSIA NOT MATTER WHAT THE COST AND YOU HAVE BLOWN A HOLE IN THEM THEY WILL NOT GO DOWN THAT EASILY BUT THEY ARE STUPID BECAUSE THE MORE THEY CAUSE TROUBLE TO YOU THE MORE THEY ARE MAKING YOU FAMOUSE. IT IS YOUR RIGHTFUL GOD GIVEN AUTHORITY TO RULE AND THEY ARE TOO DAMN JEALOUSE.

According to above journalist’s Tweets – Trump is simultaneously a Nazi, a Bolshevik and an Iranian mullah, that’s some ideological mash-up.