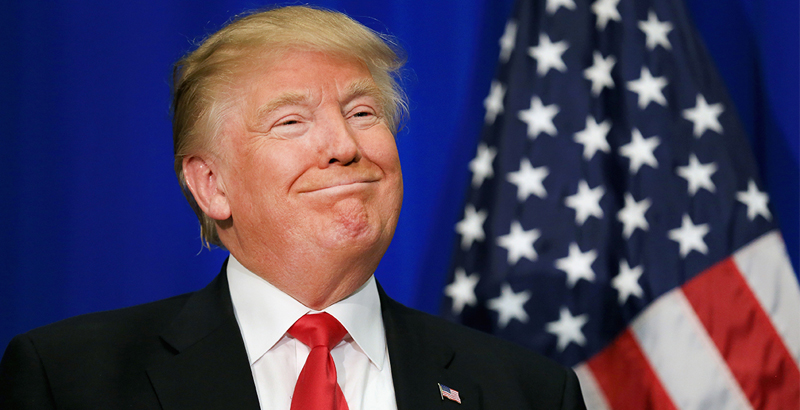 US President Donald Trump has called for an investigation of meetings of leaders of the Democratic minority in the both houses of the US Congress with Russian politicians, the CNBC TV-channel reported. Senator Chuck Schumer, who met with Russian President Vladimir Putin, was called by the US President “a real hypocrite.”

Trump criticized leader of the Democratic minority in the Senate, Chuck Schumer. As CNBC reported, the latter urged US Attorney General Jeff Sessions to submit resignation due to his contacts with Russia.

Trump posted online a photo, which shows laughing Schumer and Putin, keeping the Krispy Kreme donuts in their hands. The US President called for “an immediate investigation” of Schumer’s connections with Russia and called the Democrat a real “hypocrite,” but did not accuse him of committing any offense.

We should start an immediate investigation into @SenSchumer and his ties to Russia and Putin. A total hypocrite! pic.twitter.com/Ik3yqjHzsA

In his turn, Schumer said that he would “happily” tell about his meeting with Putin, which, according to the senator, took place in 2003 “in full view of press and public.” Then, Schumer asked whether Trump and his team are ready to talk openly about their contacts with Russia.

Happily talk re: my contact w Mr. Putin & his associates, took place in ’03 in full view of press & public under oath. Would you &your team? https://t.co/yXgw3U8tmQ

In addition, as CNBC noted, Trump criticized leader of the Democrats in the House of Representatives, Nancy Pelosi, who accused Sessions of perjury and also demanded his resignation. The US President referred to an article in the Politico magazine that provided a photo of Pelosi, which was contradictory to her statement that she had never met with Russian ambassador to Washington Sergei Kislyak. Trump also called for another investigation against Pelosi.

I hereby demand a second investigation, after Schumer, of Pelosi for her close ties to Russia, and lying about it. https://t.co/qCDljfF3wN

So now the shoe is on the other foot? Will CNN cover this story (the abuse of the mentally deranged).

This is Southfront, they don’t rely on MSM.

Trump has all the opportunity to throw the book at McCain for illegally entering Syria recently, O wait McCain is a reptilian.

Chuck Schumer is a Jewish-surpremisist-bigot. He wants all Syrians killed and living under terrorism so his Jewish-people can expand and take the rest of the Golan Heights, and eventually all of Syria. Schumer is a Zionist who opposes the health and good will of ethnic-Europeans and ethnic-Russians alike. Jews are only pro-Russia when it is anti-Russian policies or anti-European policies that are being implemented. http://realjewnews.com/

Trump has seemingly commenced fighting fire with fire. Good strategy to shut down Democrat’s phony hysteria over Russia. Without that angle of attack – unsubstantiated as it is, but peddled daily by MSM – the Democrats have to start addressing actual policy debates.