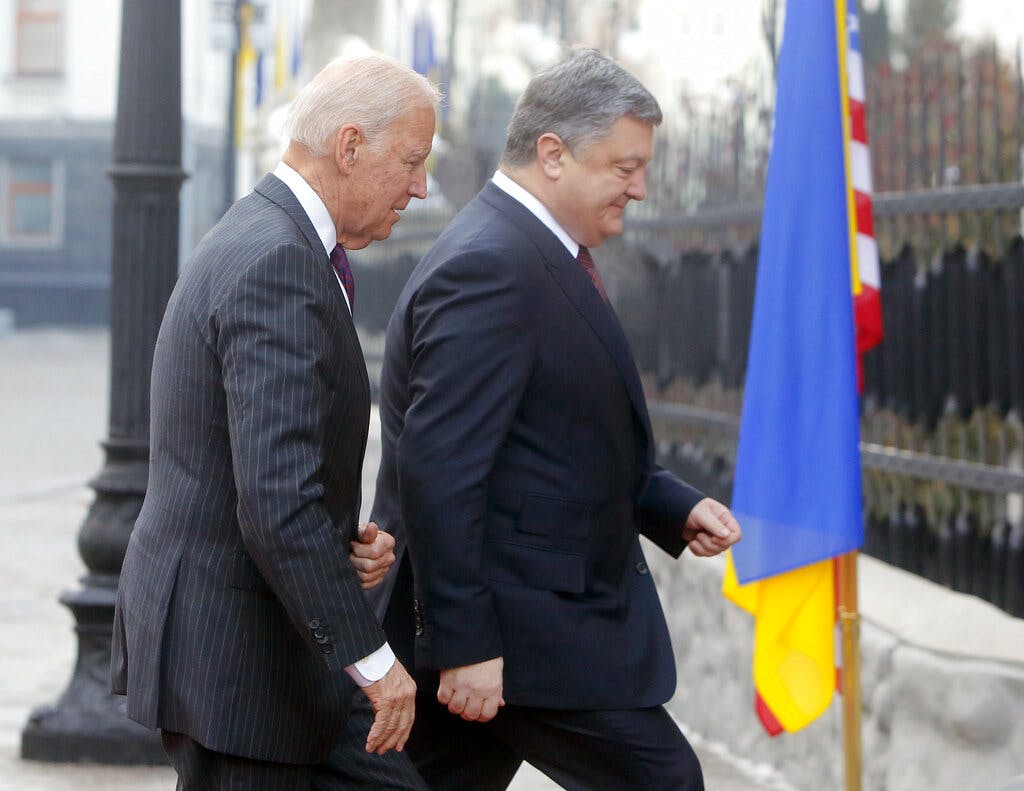 On September 16th, Ukrainian member of parliament Andriy Derkach and former prosecutor Konstantin Kulik continued releasing evidence on the US Democratic party, primarily Joe Biden and his son Hunter Biden and their partners in Ukraine.

This time there were fewer “Poroshenko-Biden tapes” and more investigations into how money was stolen.

Derkach and Kulik showed the scheme according to which the gas company Burisma, where the son of the US Vice President Hunter Biden worked, was laundering money.

The money that was in cash in Ukraine was withdrawn to the West under fake contracts and there deposited on the accounts of Burizma in the Latvian subsidiary of Privatbank.

The total amount is approximately $10 million each month in total.

Payments were made from Latvia to Western lobbyists of the owner of Burizma, ex-Minister of Ecology Nikolai Zlochevsky.

Derkach published the testimonies of a former SBU (Security Service of Ukraine) officer Vitaly Mikhailyuk. He was recommended as a person who worked for the Technova company, which rented a number of thermal power plants in Ukraine. 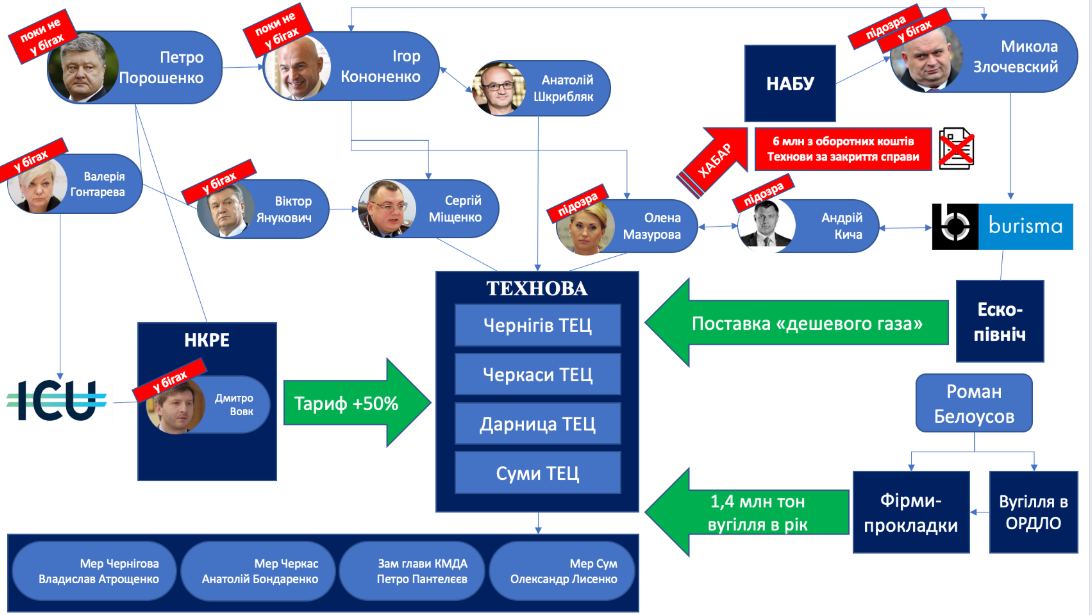 According to Derkach, its leadership – businessman Anatoly Shkriblyak – agreed on the appointment of “overseers” from former Ukrainian President Petro Poroshenko’s ally Igor Kononenko. After introducing schemes like Rotterdam +, the group began to make massive profit.

Derkach named Elena Mazurova as one of the managers of this scheme from the people of Kononenko, whom NABU now suspects of giving a bribe for closing a criminal case against the owner of Burizma Zlochevsky.

The bribe itself was in the amount of approximately $6 million, while the total sums are upwards of $50 million.

Separately, Derkach spoke of how American “investment” was provided to re-certify rosecutors under Ruslan Ryaboshapka. The United States allocated $7 million to this end.

Part of the funds – $744,000 – went “to hotels and buffets”. Another part – to the unknown LLC “Symetriks-Ukraine”, which conducted anonymous testing of prosecutors. Students have been hired for the company over the last 20 years.

It is interesting that the official activity of this company is retail trade.

“They sell bananas on the market in the Kiev region,” said ex-prosecutor Kulik.

Also, according to investigators, the firm itself did not own the testing technology, but bought it from another company.

The testing was obviously a dud, it never happened. Essentially, the money from the US was being appropriated, and as such stolen, and the personnel requested by the US Embassy was simply accepted and pushed forward.

Furthermore, this kind of US influence on the selection of prosecutors is taking place through one Irina Venediktova.

Derkach published a letter from the director of the US Embassy’s Department of Law Enforcement, Stephanie Holmes, to Venediktova. It contains a list of “independent experts” who will be included in the personnel commissions for the selection of Ukrainian prosecutors. 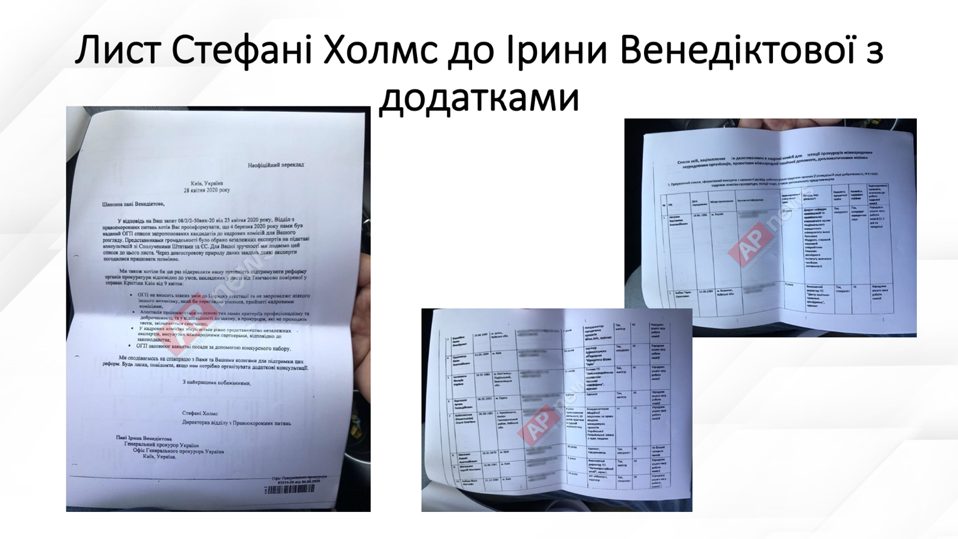 The case on embezzlement of funds by the Symetrix shell company, opened at the request of Derkach, was closed without results. The People’s Deputy also claims that hundreds of documents about this testing were destroyed in the Office of the Prosecutor General.

Finally, Derkach told another interesting fact from the life of the embassy in connection with his conflict with the Americans.

He was denied a visa.

He believes that this was done at the request of the head of the Anti-Corruption Center Vitaly Shabunin, whom Derkach had already accused of embezzling international aid.

Derkach claimed that the 36-year-old (and married) Shabunin is in a romantic relationship with 55-year-old US attorney Christina Queen.

The previously released documents already provided a closer look at corruption schemes created by the US establishment in Ukraine and terrorist acts, which the Kiev regime was preparing on the territory of Crimea. The US leadership was well-informed about these acts of terror and were conducting active efforts to silence these facts and manipulate the international public opinion to hide them.

The same approach was employed towards the internal political terror as well as the ethnic and religious discrimination that became a permanent factor of the everyday life in Ukraine after the 2014 coup.

The discrimination of Russian-speaking population, the government campaign against the canonic Ukrainian Orthodox Church (Moscow Patriarchate), the wide-scale censorship, the killings and persecutions of political opponents are being painted by mainstream media and the Washington establishment as a sign of the strengthening ‘democratic values’ in Ukraine.

Come on SouthFront. You were more active in 2016. Don’t let them Dems scare you with Mueller Reports. They got nothing on you. Clock is ticking, 2 month left. lets get the ball rolling.

CIA trolls and ukropnazis will cry and rage ;)

?thr are a few around here

I’m surprised that there is anyone left in Kyiv that is honest enough to speak the Pravda. The US embassy in Kyiv , is a CIA , mossad/ NWO hornets nest, as all the embassies are now. The Jews make sure the right Rats get enough money, so that those whores are subservient to the cause – destroy Russia again. Isn’t time for Poroshanster, to worm his way back ?

Styx provided link to FT article, which is worth reading. Thank you Styx.

Garry Compton
Reply to  AM Hants

lol -Sack of shitvili to spearhead reform — yep the CIA still runs Georgia, Ukraine and a dozen others. Spacibo AM

Must admit, reading the article, with satire head on, it reminded me of a Monty Python script. Would love to know what Saakie has done to pleasure $oro$ so well?

Biden is as corrupt as they come . He did tell the Ukraine either fire the prosecutor investigating his son or US aid money will be withheld. Trump writes his speeches on toilet paper which get flushed as quick as he makes them. These are the best that the US can come up with ?? .. End days of the Roman Empire all over again. https://www.c-span.org/video/?c4820105/user-clip-biden-tells-story-ukraine-prosecutor-fired

AM Hants
Reply to  John Wallace

He even bragged about it in his biography.

Privat Bank, who used to be under the control of Igor Kholomoisky. The Head of the European Jewish Community who founded the Nanzi ‘Azov’ Battalion.

Biden, Son and how many other US politicians who are linked to Burisma Holdings?

Donald Tusk, was also Polish and what did his grandfather do in the war? How many MEPs does $oro$ fund, over in the EU?

So few people, but, so much destruction seems to follow them around?

Has anybody seen Saakashvili is back in favour, over in Ukraine? Why did the Comedian want the tie muncher as his Deputy Prime Minister? Thanks Styx for the FT link into the story.