On November 5th, the Anonymous released a number of documents which they claimed relate to the British “Integrity Initiative” propaganda project launched in the fall of 2015 and launched by the UK government.

The documents were posted on the Cyber Guerrilla hacking group website.

The Handbook of the initiative begins in the following way:

“The Integrity Initiative was set up in autumn 2015 by The Institute for Statecraft in cooperation with the Free University of Brussels (VUB) to bring to the attention of politicians, policy-makers, opinion leaders and other interested parties the threat posed by Russia to democratic institutions in the United Kingdom, across Europe and North America.”

The handbook also claims that the project aimed to unite people who understand “the threat,” in order to provide a coordinated Western response to Russian disinformation and other elements of hybrid warfare.

“The nature of this response needs to render counterproductive the Russian tactic of dividing countries internally and from one another.”

It would require a cluster of “well-informed people from the political, military, academic, journalistic and think-tank spheres,” who are to track alleged disinformation and also inform decision-makers and other interested parties about the on-goings.

The expected programme results are three:

The British team members, their respective expertise and the languages they speak are also listed in the Handbook. They have their initials included, so in future communication it would be easier to name them.

Some of the individuals’ expertise appear to be redacted.

The list is as follows, with initials included as well as redacted sections pointed:

There is also a comprehensive list of Cluster Members.

It also appeared that there was a successfully implemented campaign, called the Moncloa campaign as of June 7th, 2018. It shows Twitter posts and successfully raise awareness. 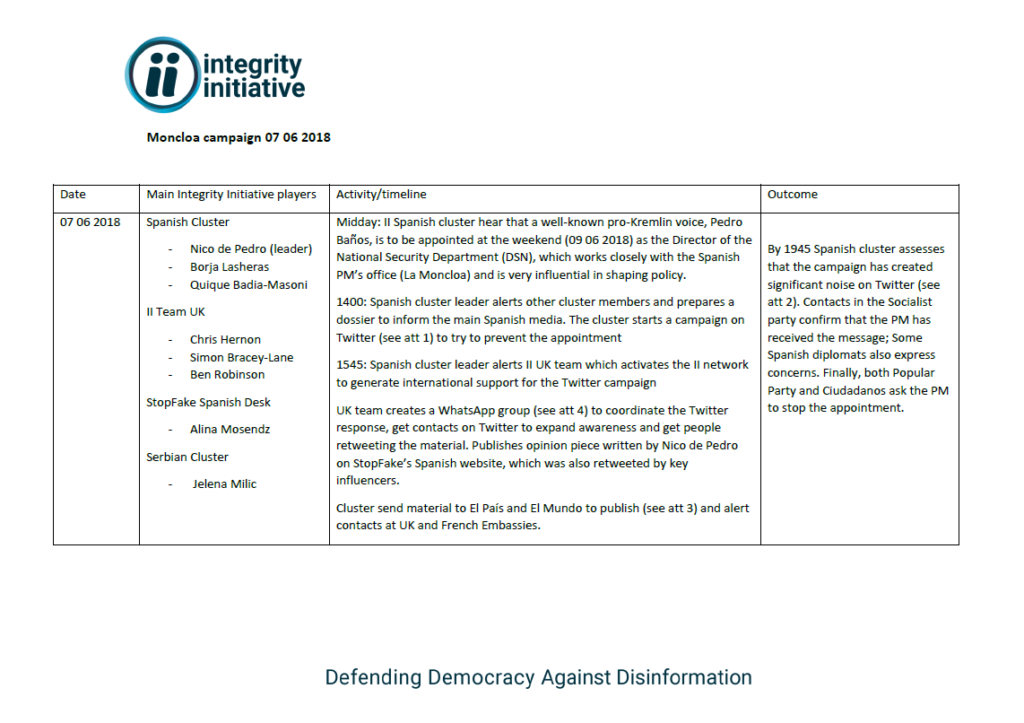 Most recently, there was a cluster round-up from July 2018. It has descriptions on the Initiative’s progress in Spain, France, Germany, Italy, Greece, Netherlands, Lithuania, Belgium, Ukraine. All of these countries have clusters which already have activity. While Lithuania, “has become particularly important in our network due to its expertise in dealing with Russian malign influence and disinformation.” Belgium is the other significant “partner,” and namely the Institute for European Studies in the Free University of Brussels.

Unsurprisingly, “Ukraine, like Lithuania, is a significant contributor of content to our programme through its front-line experience and active institutions.”

As of July 2018, a cluster is being formed in Oslo, Norway, headed by a former civil servant. The Norway cluster also has a link to “an independent” NGO working with civil society in Tromso and operating in the high North, since “Russian influence in Norway has a different character in the North from that in the capital, and needs to be addressed accordingly.”

In Estonia, Latvia, Portugal and Sweden there were on-going meetings with relevant experts to identify potential cluster members and leaders. Armenia also appeared to be a tricky target, as  following the popular quiet “revolution” in the country, the Brits are exploring how we might safely establish an Integrity Armenia, with no success. “The delicate political situation requires that this be done with the utmost caution.”

There are also attempts to track Russian influence and movements in the Middle East and North Africa, namely in Jordan, North Africa, the Sahel and Maghreb. Israeli think tanks were also under consideration.

Moldova was a significant country to establish a cluster in, due to “Russian interference” in the country.

According to the round-up, Malta is one of the most important channels for Russian influence into Europe via corruption, organized crime and money laundering. It was, however a very challenging country to establish a foothold in.

The Czech Republic did not require a cluster, because it is “well served by the European Values think tank.” Thus, instead of a cluster, the Brits linked with the organization and supported its activity.

The Integrity Initiative would have no issues operating in the US. In Canada the plan is to establish clusters in both Ottawa and key Provincial capitals.

The countries with established clusters have lists of members and coordinators. All coordinators and many members have their email addresses listed. Many of them have government or NATO addresses.

The coordinators are as follows:

There is also a list that provides Cluster leaders. As well as a list that shows upcoming events in the various countries of interests, most of these events are elections.

In May 2018 the Initiative released a “Guide to countering Russian disinformation.” It includes propaganda on various topics, including the MH17, the Skripal case, the Syrian chemical weapons attack in 2017. Claiming that Russia blamed the West and provided no evidence, which especially in the case of the MH17 was not the case. It failed to mention that the West also provides no evidence to prove their accusations.

The Intiative’s budgeting also gives some insight into an open secret. In the handbook there is budget for presentations to partner organizations which are two: the Atlantic Council and the “independent open source intelligence investigative website” Bellingcat. It is planned to exchange progress reports with the two partners, it is quite apparent what the progress is on. The above listed Euan Grant appears to be responsible for coordination with partners.

The list of contacts in British embassies is as follows: 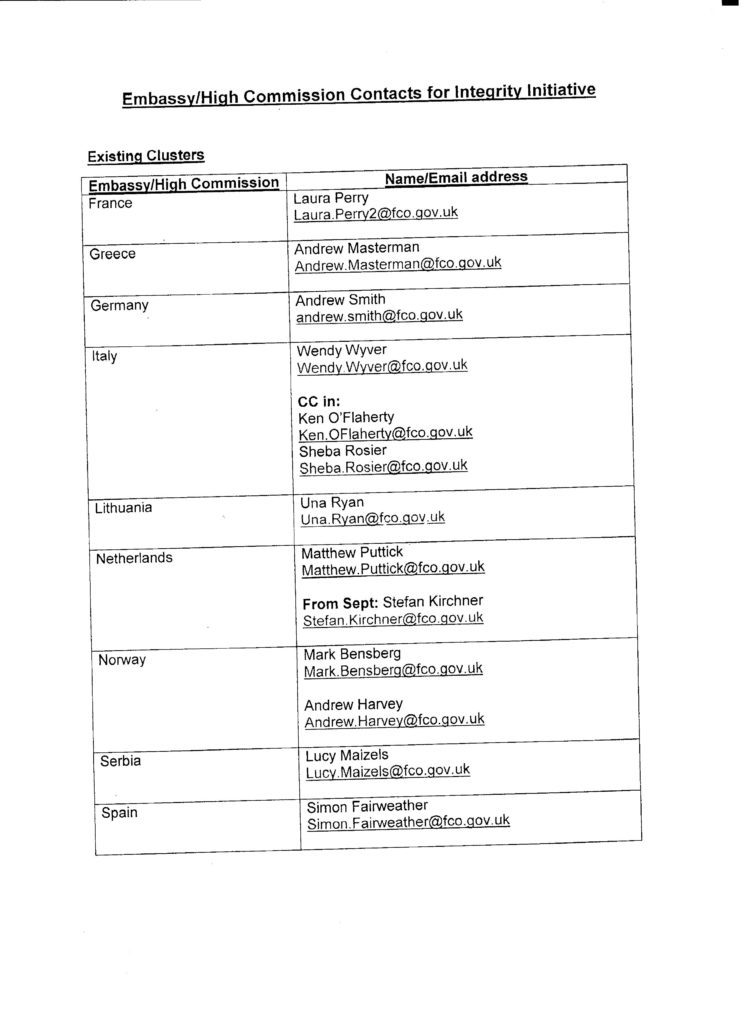 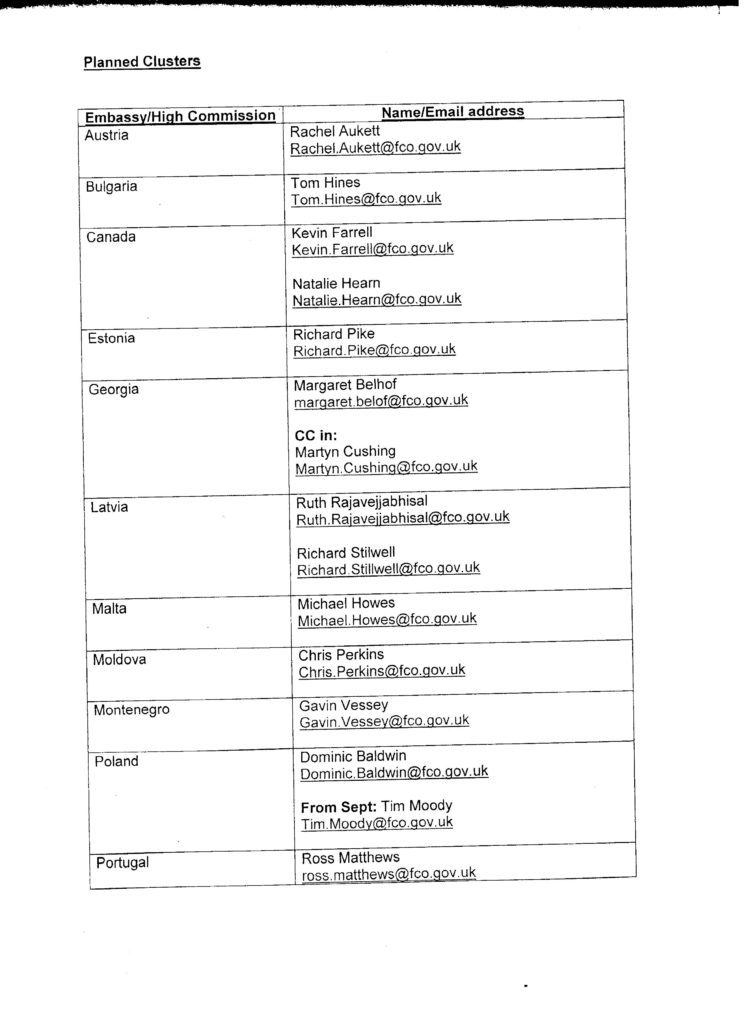 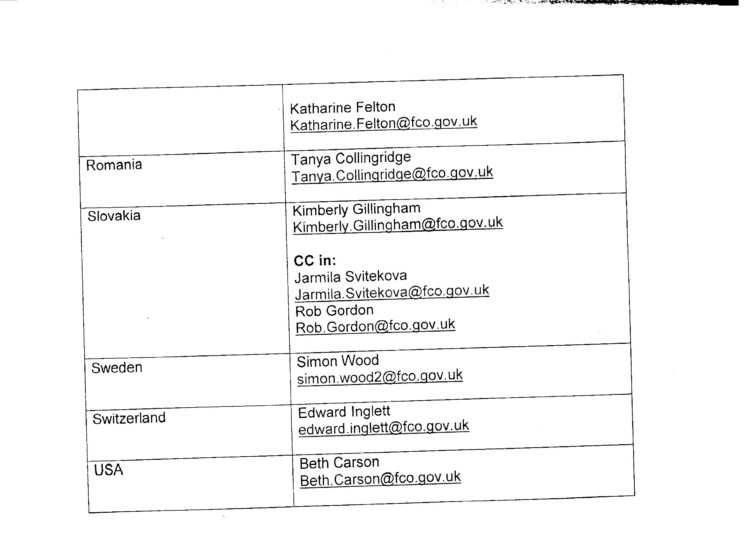 According to the Anonymous, all of the work of the Integrity Initiative is done in complete secrecy, via concealed contacts in British embassies. This further leads to suspicion that the alleged “Russian propaganda, aggression and influence” that have been turned into a hysteria in mass media may serve as an excuse for the UK to “create a global system of information influence and political interference into affairs of other countries.”

One doesn’t need the documents to see what is obvious. But it is nice to have evidence.

no, there is a lot idiots who sill thinks that Russia is responsible even for every heavy snow :)

OMG. Yes, all states tell lies at times, but the biggest lies are in the pamphlet linked to in this article- QUOTE: “The Organisation for the Prohibition of Chemical Weapons (OPCW) confirmed that the nerve agent which was used was something which only a state could produce, and agreed with the findings of the British government that Russia was the source.” This source: https://www.theguardian.com/uk-news/2018/apr/12/novichok-used-in-spy-poisoning-chemical-weapons-watchdog-confirms-salisbury writes, however: The OPCW does not have the power to identify the source of the nerve agent, only to spell out its chemical properties.

Ah, the USUKTrolls and their factories have been exposed!

Only mindless morons and vassals would believe anything that originates from the UK and US governments concerning Russia. It must really p*ss them off that no matter what cr*p these 2 governments dream up, the Russian government always seems to be several steps ahead. It does however get tiring hearing, seeing, reading, the bs promulgated by these 2 countries’ governments 24/7.

The UK political elite are like a Mafia sidekick, shouting their mouth of trying to provoke a response whilst believing the Mafia has their back … they better be careful because their US Capo Crimini has a habit of leaving it’s sidekicks to it (e.g. Georgia 2008) when it comes to a powerful opponent like Russia, so the UK might just provoke itself onto the receiving end of a decent whack.