The 2020 Iowa caucuses turned out to have been designed to depend on the use of a new, untested app with extensive ties to establishment insiders and to the Pete Buttigeig campaign, and because of problems using this app as of this writing we are still waiting on the full results of the election. The Iowa Democratic Party has bizarrely released a partial result with 62 percent of 99 counties reporting, which just so happens to have favored the campaign of a Mr Peter Buttigeig, who in the sample came out on top in delegates despite coming in second in votes.

A popular “gold standard” poll by the Des Moines Register that is normally released shortly before the Iowa caucuses had Sanders comfortably in first place. The results of the poll were instead left unpublished this time until after elections were underway due to a complaint by the campaign of, you guessed it, Pete Buttigeig. This would be the same Pete Buttigeig who attended the infamous “Stop Sanders” meetings with Democratic Party insiders last year, by the way.

According to an Iowa precinct chair, the problems using the app (developed by the aptly named Shadow, Inc) included literally switching the numbers entered into it on the final step of reporting results.

“A precinct chair in Iowa said the app got stuck on the last step when reporting results,” CNN reports. “It was uploading a picture of the precinct’s results. The chair said they were finally able to upload, so they took a screenshot. The app then showed different numbers than what they had submitted as captured in their screenshot.”

It doesn’t actually matter anymore who really won Iowa at this point; the damage is already done. Iowa is a sparsely populated state with an insignificant number of delegates; nobody campaigns there for the delegates, they campaign to make headlines and generate excitement and favorable press for themselves in the first electoral contest of the presidential primary race. This has already happened, and with Buttigeig first declaring victory before any results were in, followed by his delegate count lead announced hours later, the favorable press has predominantly gone his way.

Even if Sanders turns out to have won the delegate count as well, this will already have happened. He will have already lost the opportunity to start off the primary contest with a win and a rousing victory speech. In every way that matters, he has already been robbed, by extremely shady establishment dealings, in the very first electoral contest of the race.

The very first. Berners are already as outraged as they were at the height of the 2016 DNC scandal, which was still months out from this point in the race. They’re already getting screwed over, and it’s just getting started.

I see many people blaming this on incompetence, some in bad faith and some in good, but in either case there is no legitimate reason to do that anymore. It has been my experience that if someone seems to be totally incompetent but every “oopsie” they make just happens to end up benefiting them, it’s manipulation you’re dealing with, not incompetence. Some people are happy to look dumb if they can get what they want. If you watch their actions and ignore their words, a very revealing pattern shows up immediately.

This is all extremely blatant, and the feelings it brings up in people are completely legitimate. Yet narrative managers like Neera Tanden and Shannon Watts are telling everyone they’re just like Trump if they suspect the Democratic establishment is again doing the thing it did just four years ago.

If such extremely shady shenanigans had occurred in Russia or Venezuela, within minutes Mike Pompeo would have been holding a press conference demanding a new election under UN supervision and an international coalition of sanctions. It’s hilarious how America is constantly staging coups, implementing sanctions and arming violent militias on the basis that their government has an illegitimate democratic process, yet its own most important electoral proceedings would make any third world tin pot dictator blush.

And don’t give me that crap about how Democratic Party primaries are separate from the US electoral system and therefore don’t undermine American democracy; of course they do. If your country has a rigidly enforced two-party system and one of those parties has bogus internal elections, then you do not have any degree of democracy in your country. Saying “Well if you don’t like our rigged primary process you can vote for the other corrupt warmongering pro-establishment party” is not democracy.

The difference between a true totalitarian dictatorship and America is that the totalitarian dictatorship enforces one political belief system which supports the status quo, whereas in America you get the freedom of choice between two political belief systems which support the status quo. The entire system is stacked to ensure the continued rule of the oligarchs, spooks and warmongers who really run things behind the two-handed sock puppet show of the official elected government. The US doesn’t attack and undermine nations when they lack “freedom” or “democracy”, they attack and undermine them when they refuse to bow to the demands of the power establishment which controls the US government and its allies.

The sooner people wake up to this, the better. In Iowa, things couldn’t have gone worse for those responsible for keeping people asleep.

Not long ago it was announced that software to place the establishment candidate of choice as the winner of a vote while placing the actual winner of the vote close behind, had been developed so as to make the results appear plausible. It’s interesting that both the poll was quashed and the mysterious app (that switched the numbers of the results) delayed the publication of the winner. No doubt much time was/is needed to ensure that the actual doctoring of the results will not provide a clue as to the actual winner.

Just more corruption on display from one of the most corrupt governments on the planet. No one should entertain the idea that said corruption will EVER allow a candidate for office that makes the country a better place to live and pulls back from wars of profit against the rest of the planet for the benefit of a select group of Plutocrats, will ever be permitted.

On another note… the only way for Sanders supporters to show the DNC just how much they appreciate the corruption on display in Iowa is to either vote for the opposite party or not vote at all.

Isn’t it clear ? The idea is to stop Sander because his very big popularity in north-america and to create a free path for Trump re-election. Two periods Republican-Two periods Democrat, and this is repeated again and again…(the real power is the military industry, oil-gas companies, jews).

DNC are corrupt to the core. The republicans ain’t great, but why would anyone want those clowns in charge?

Judging from anti gun rights Jew Bloomberg getting 0%, not all Americans are enamored with the current state of affairs.

To get rid of the real world class Clown-in-Chief now in the White House.

I never heard of this guy until last night. But between a Jew, a faggot and a rabid Zionist. America has some serious issues that need correcting. And Jews are at the core of it. 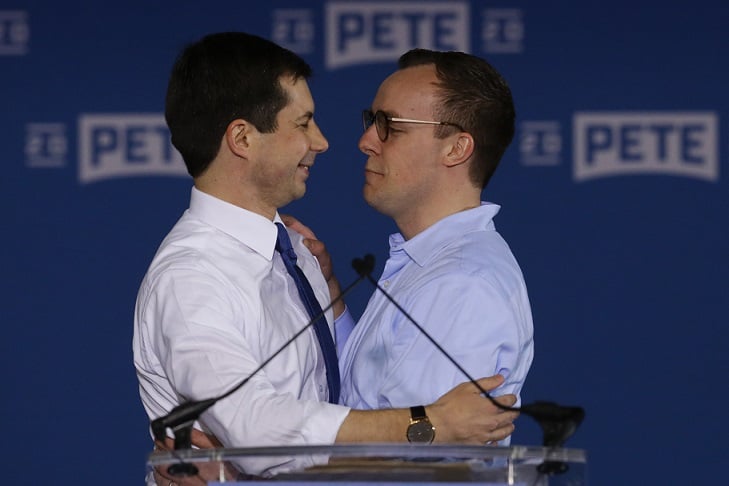 If Jews were as powerful and diabolical as you claim, you and yours would be long gone. Your very existence proves your claims wrong, Adolf.

Being a Zionist shill with a problem with truthers exposing Jew crime and evil, you should know all about the Zionist Nazi collaboration. I’ve posted the links here many times. I’ve also posted plenty of credible evidence about evil vermin Jews genociding 10s of millions of innocent people. You’re the one who has a problem with these crimes being exposed, not me. Your evil cult and criminal organization that rapes 1,000 children every week should be outlawed and Jews and Israel extinct.

The only thing I do not understand is why Sanders supporters thought anything would be different in 2020 over 2016. In 2016 the DNC very laughably obviously rigged the entire primary elections against Sanders. Sanders then sold out his own supporters and went along with it, trying to pressure them into voting for Hillary. It makes me think that many Sanders supporters are just self-loathing liberals, not honest socialists.

An honest socialist would never vote for neo-liberals like Hillary Clinton or Mayor Pete Buttplug. They would vote for and support the Green Party or one of the smaller socialist parties. And if, due to anti-democratic ballot access restrictions, none of these third parties were on the ballot in their state, they could always just boycott the elections. They have no excuse to surrender their votes to the DNC.

Talking about shooting yourself in the foot! Someone just machine-gunned the entire party’s feet!

It definitely was a F’up and will hopefully end the use of caucuses. Without these undemocratic follies, Bernie would still be a nobody.

Sure, Igor, that’s just what you get your Vodka ration for saying. But it’s understandable since it keeps you from being drafted to go to Syria or Ukraine where Russians are dying in greater numbers of late.

So butt-boy’s app won’t count correctly? I mean, computers are good at counting, aren’t they? How hard can it be? All morons – join the democrats!